The Ebenezer Chapel and the Dockland Settlement Development

I have been trying to find out more about the development that is currently consuming the land that was formerly occupied by the Dockland Settlement, a considerably untidy community project that was a bit of an eyesore, but incorporated what was clearly once a rather nice chapel, the Ebenezer Chapel (a Norwegian place of worship and seamen mission), together with a contemporary two storey house, which was also obviously once very attractive. 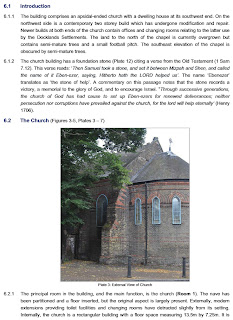 It is all happening on the part of Rotherhithe Street that forks right off Salter Road, and is currently still marked on Google Maps as "Docklands Settlement Youth and Community Centre."  Southwark Council has this to say on the subject of the new development:

The Ebenezer Chapel and the attached house were recorded by archaeologists of the AOC Archaeology Group before it was demolished, and that 33 page report can be found here on the Archaeology Data Service website.:  "This was built in 1871 for the local Norwegian population. This building was recorded to Level 2 standard as defined by English Heritage Guidelines."  The photograph on this post is a screen-grab from that report, showing the Ebenezer Chapel, that stood at the site until recently.  There's a brief but good explanation of the background to the word Ebenezer (not a name, as I ignorantly thought, but from the Hebrew, meaning "stone of help") on the Missouri Conference website: http://www.moumethodist.org/news/detail/831

If you're interested in the Scandinavian churches in Rotherhithe, there's an article on the subject from The Bridge available online at: http://www.southwark.anglican.org/thebridge/0912/0912p8.pdf.