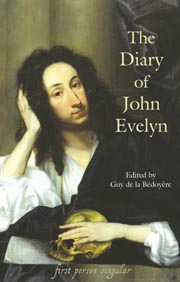 Thanks to the Transpontine blog for this link to The Saye's Court - London Lost Garden  blog, which I hadn't seen before.

Saye's Court was one of the homes of diarist John Evelyn (1620-1706), which came to him through his wife's family on his marriage to her.  Strictly speaking, it's outside the scope of this Rotherhithe-based blog, because Sayes Court was down the road, part way to Deptford, in the immediate vicinity of the former Royal Docks.  But Evelyn's diaries are favourite reading of mine, shedding light on the area as a whole during the period when he lived here. Evelyn was a keen botanist and the Sayes Court gardens were full of plants that he had gathered from far and wide across the planet.  Sayes Court was so conveniently located for the docks that Peter The Great rented the house and its gardens when he came to learn the art of ship building (John Evelyn's accounts about the damage inflicted upon the property by Peter and his retinue make for some splendid reading).

The London's Lost Garden blog began in February 2010.  I've spent a happy hour reading through previous posts. Here's an excerpt from the first post, which I really liked.

It was one day early in  2005, soon after we’d moved into our flat nearby, that we first discovered Sayes Court Park, adjacent to the currently-disused Thames-side dockyard in Deptford.  I was interested in seeing the wizened mulberry tree at its heart, supposedly planted some three hundred years ago by Czar Peter of Russia, of all people.

I was a bit sceptical of that particular legend even then, and am more so now that I have read the contemporary accounts of Peter’s behaviour during his visit. But I was nonetheless intrigued by the idea of a tree surviving from the greener, pre-industrial landscape in these parts. The gnarled but still vigorous and reportedly fruitful mulberry at least held out the eventual prospect of a taste you can’t buy at Tesco.

If you ask local people about the park, some will tell you that John Evelyn, a friend of Samuel Pepys, and like him a diarist,  had a famous garden there. His house, and the garden, were indeed called Sayes Court.   The question was, how much, if anything, remained from Evelyn’s day in the modern park?

Once you’ve got your eye in for it – by archaeological fieldwork, surveying, studying old maps – you develop an almost tangible sense of the past under your feet.