Graffiti on the Stave Hill sculpture 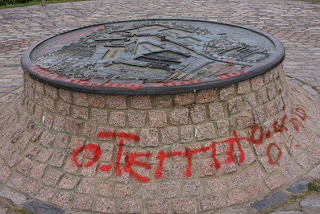 I took a guest, who is staying with me for the British Museum colloquium next week, to show off the many joys of the Russia Dock Woodland and Stave Hill Ecological Park and just look at what I found when I took him to Stave Hill. On the way up the staircase I was singing the praises of the Michael Rizzello sculpture, which I genuinely love, and I found that it had been defaced with bright red paint. I cannot say how upset I am. I will of course report this to Southwark Council on Monday.

I was in Siwa Oasis in Egypt in March leading a small tour through the Western Desert and we went to a Graeco-Roman temple where a set of German tourists were systematically hammering the fossils in the fossiliferous stone which made up part of the temple, to remove them for souvenirs. What is wrong with people? The urge to destroy something absolutely unique never ceases to amaze and disgust me.