A local story about life afloat in South Dock in 2015 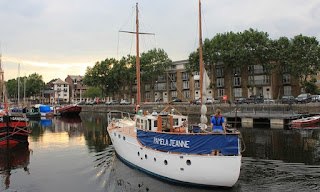 A nice story on The Guardian, a personal account by Susan Smillie of the journey that led her to living on a boat in South Dock, Rotherhithe.  The article is from July 2015, but I've only just found it whilst looking (as usual) for something else entirely: "Ten years living on a boat: 'It's a fun life – I'm not a watery hobo'.
http://www.theguardian.com/lifeandstyle/2015/jul/29/ten-years-living-on-a-boat-its-a-fun-life-im-not-a-watery-hobo

Here's an excerpt from the piece, but do read the full article where Susan goes into the downsides as well as the upsides of life afloat:


It is hard to capture without cliche. It’s waking to the sounds of moorhens and ducks, or gigantic carp banging on the hull as they jostle; it’s watching cormorants swoop for fish, or glimpsing a shy heron, still as a statue in the shadows. There’s a seal that lives nearby, too: it visits Billingsgate market for salmon and though I’ve never seen it, the possibility is enough to keep me scanning the water. Likewise the pod of porpoise that turned up a couple of years ago. Then there’s the community of people, the wealth of knowledge and skills swapped in one place – engineers, lawyers, doctors, photographers, people inspired by and invested in their environment (such as the plans lodged by an architect, who lives on a tugboat, to build a floating swimming pool in the dock).

Back to my original Google search:  There's a rumour that a sea shanty was written in South Dock and has been recorded.  Does anyone know of it?  I know about the whaling shanty written in Greenland Dock, but the one I am looking for is specific to South Dock.  Just the title or a couple of lines from the song would do.