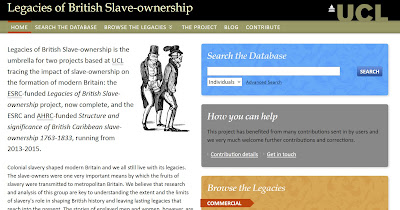 I am very glad that I joined the Port of London Study Group, which meets weekly at the Museum of London Docklands.  Every week we have two one-hour or one two-hour lecture about some aspect of the Port of London.  Research is conducted within the group, and external speakers are invited too.  I have only been a member for a few weeks but I am loving it.

This week's visiting speaker was Dr Nicholas Draper from the Legacies of British Slave Ownership project.  He was superb.  The first talk put London's docks into the economic context of the slave trade, explaining how the trade helped to finance the eastward growth of the West India and London Docks on the north banks of the Thames, and how the trade operated.  One of the concrete outputs of the  Legacies of British Slave Ownership project is the database.   When slavery was abolished it was decided that slave owners needed to be compensated for the loss of their workers.  £20million was allocated to the compensation.  Over a period of four years the money was allocated and detailed records were made of who were compensated when their slaves were freed.  The Legacies of British Slave Ownership project allows you to search under various different parameters but perhaps the most interesting for some people will be looking up their family name to see if their ancestors were compensated in the past for the loss of their slaves, and were therefore slave owners.  An uncomfortable thought.  I must be safe on my father's side but I do worry about my mother's canal-building ancestors!  I haven't yet investigated that possibility. Here's the database address if you want to take the plunge and find out if your own family history includes slave trading: http://www.ucl.ac.uk/lbs/ 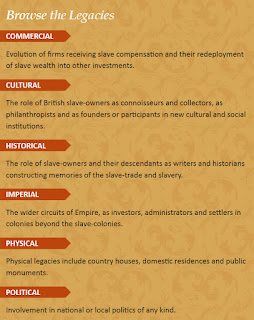 My head has been fizzing ever since with linkages, with the vast and complex network of different commercial interests and innovations, with the perception of that world becoming smaller by the day, with no ambition being too big, with the sense of the drive that adapted itself so painlessly to the idea that foreign people could be treated as commodities like sugar, tobacco, rum or pack animals.   Realities like the Empire and the slave trade are things that as a nation we are often embarrassed to talk about, but in tandem with other ventures, the slave trade was one of the complex enterprises that established the commercial foundations on which our economy and culture were built.  As mortifying as it is today to recognize the less honourable parts of our past, we cannot ignore that those financial successes helped to form the nation that we have inherited today.  Understanding how the slave trade fitted into the viability of the country as a commercial entity is essential to understanding our history.  The  Legacies of British Slave Ownership project is looking explicitly at some of the outcomes of the slave trade, at the contributions it made in a set of different but related areas, the "legacies" of the project's name.  See the Legacies website for more about these.

What I am excited about from the point of view of this blog is that I am terribly uninformed about the slave trade, and I now know that there is an awful lot of research that I can pursue in the future with respect to Rotherhithe.  For example, now that I know that slave trade incomes helped to finance the docks on the north banks of the Thames opposite Rotherhithe, I am going to use the database to see if local ship builders, ship owners, ships' captains and local notables were involved in slave ownership and how that impacted the social and economic life of the peninsula.  It is almost certain that those who ordered East and West Indiamen from Rotherhithe builders had some interest in the slave trade, so that will be interesting to look into.  The Rotherhithe docks were very under-developed prior to the 1833 Abolition, although the Howland Great Wet Dock (1696) was funded partially by one family’s East India profits and was used at least partly as a winter base for East Indiamen, so that’s another avenue of investigation. 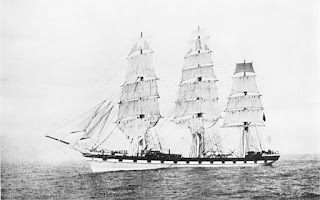 But even after the abolition of slavery in 1833, dirt-cheap labour was still being transported from where it was in ready supply to where it was needed, and I want to learn more about that too.  For example, I posted a piece about the tea-clipper Borealis, built by Thomas Bilbe in 1864, well after the abolition of slavery, and that will now need rewriting.  Bilbe was involved in the movement of Chinese “coolies” to Cuba as cheap labour, and I really need to go back and rethink the piece in the light of what I learned today (not to mention that it wasn't my best piece of writing ever!).

Today's lecture makes me look at everything I have been writing about Rotherhithe in a highly critical way and with a real sense of annoyance, although not for the first time.  One of the eternal and irritating problems of blogging history is that it is fragmented, pulled ruthlessly from its context.  It is the best way of using the time I have available to me, but I am always aware that the bigger picture is always lost in my blog.  Ships, buildings, people, all lifted from their social and economic past and presented like excavated pieces in an Edwardian museum.   I need to do something about that before too long.

So it's a huge thank-you to Dr Draper and the Port of London Study Group for giving me a lot of food for thought, and now it's back to my day job for the time being!

Don't forget to visit the Legacies of British Slave Ownership project at http://www.ucl.ac.uk/lbs/ and you can see one of Dr Draper's talks on the subject of slavery and its impact on London on Youtube: What does London owe to slavery? (26 Oct 2010)
https://www.youtube.com/watch?v=AzUxQwez9fM