Red crane may be preserved as bird sculpture? Sigh.


Anyone who has been following the fate of the red derrick on the Thames Path at the end of Odessa Street will be aware that it is under threat from a development that will replace that corner of derelict basketball court and former youth club, removing the problematic former nightclub at the same time.  There are benefits to the Hollybrook Home proposals, as well as potential downsides (see my summary of the consultation exhibition in an earlier post). 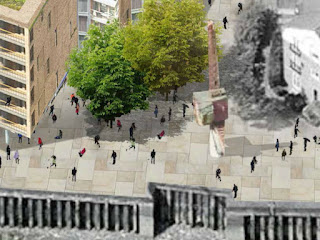 According to an article in Southwark News today by Joey Millar, there are now two principal options on the table for the derrick (or crane).  One is to preserve it partially by restoring the metalwork and removing inconvenient arms, leaving one arm remaining (the CGI image from Hollybrook Homes, left, shows the sort of thing envisaged).  The other is to use the metalwork to sculpt it into the form of a bird, to create a crane of the feathered variety, a sort of somewhat grizzly pun.

If the derrick has to be modified in any way, I don't see any point in doing anything other than retaining as much of it as possible.  It is either a meaningful piece of our heritage as it stands, or you might just as well give up and go home.  How on earth is a bird sculpture supposed to represent Rotherhithe's wharfinger past?  Well apparently that wouldn't be the point - the point would be to represent some sort of "aviary heritage" of which I was unaware.  I think that the word "heritage" is being used somewhat loosely here.  A local resident feels that a bird would be a "talking point" but I have no idea how that is supposed to tie in with what the red crane was all about, and what it still stands for today.

Apparently the options will be put to local residents after Christmas.  I was tempted to make a joke about turkeys, and almost stopped myself just in time.  Sigh!