Planning proposal for outdoor pool on Greenland Dock, with photos

The documentation for planning application 15/AP/1752 is on Southwark Council's website at http://planbuild.southwark.gov.uk/documents/?casereference=15/AP/1752&system=DC.  This will place it immediately opposite Tavistock Tower and the dock-facing houses and apartments of Russia Court East.

Here are some of the artist's impressions shown in the above documentation.  My initial reaction was dubious surprise.  Now I have I seen the artist's impressions and I believe that it will be incredibly noisy as the sound of screaming kids carries over the water, and that the shower blocks will be incredibly ugly.  Around 10 years ago the Watersports Centre erected a crane and ran bungie jumping from it - incredibly loud and intrusive and seriously annoying.  That was refused permission to set up on a permanent basis because it was so anti-social and I don't see this being any better and any less anti-social.  I live opposite the Watersports Centre and this plan really doesn't make me a happy bunny.

It's not exactly heritage-friendly either, and will spoil not only the peace of the dock but its appearance too. 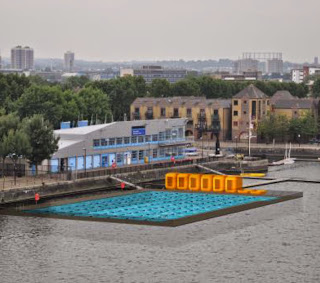 It's not exactly a sympathetic use of a major piece of Rotherhithe's heritage. The image below shows an aeriel view.  The pink dot marks the Moby Dick pub, and the blue rectangle is the proposed swimming pool.  It really is quite enormous. 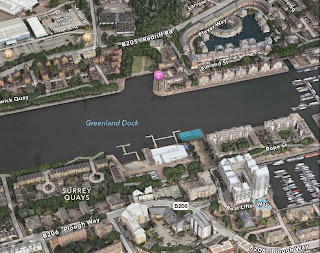 In so far as traffic is concerned, I am concerned about the impact on the one-way system and Jamaica Road.  In addition, it will probably cause parking problems for the residents of the area surrounding the Watersports Centre, as there is an amazing amount of new residential building going up there at the moment, which will put additional stress on both the roads and the parking situation (the Planning statement says that all homes being built have their own dedicated parking - but what about home owners with more than one car?).

The planning statement says that it will accommodate children between the hours of 10am and 6pm but will be open earlier and later than these times for adult usage.  They say that "it will be a great sight within an already amazing dock."  Quite how that shower block translates into "a great sight" I have no idea.

And anyway, does Rotherhithe need a swimming pool with Seven Islands and its big pool literally just down the road? And what impact will this have on what I have heard is the promise of an eight lane Olympic style swimming pool and aqua centre in the soon to be announced masterplan vision from British Land?

The application was received 15th May 2015.  You can send in your comments either in support or in opposition at the following page (the case office is Dipesh Patel) but there is no indication of when the ability to feed into the planning process expires.  One to keep a very close eye on.
http://planbuild.southwark.gov.uk:8190/online-applications/applicationDetails.do?activeTab=makeComment&keyVal=_STHWR_DCAPR_9560300

So much for our Borough Open Space!  Thin end of the wedge?

Thanks to the SE16.com newsletter for this information.
Posted by Andie at 16:54

This is an utterly ludicrous idea. The cons completely outweigh the pros. Please see below.

2. Cons - there are several of these

(a) Noise:
(i) There is simply no way to mitigate noise since it is an open to air structure.
(ii) Additionally, rather than mitigating it, the acoustics of the dock will materially amplify noise and blight the lives of hundreds of families who live around the dock.
(iii) It will come as no surprise that past proposals for temporary structures (such as allowing temporary docking facilities for yachts during the London Olympics) and permanent structures (the bungee jumping crane) in the dock were rejected on, amongst other grounds, noise considerations.

(b) Environmental impact. The calm of the dock supports a thriving eco-system with plenty of fishes and different species of birds. This delicate eco-system will likely suffer enormously as a result of:
(i) significant and localised noise increase;
(ii) temperature gain as a result of the heated water within the pool changing the thermal conditions in the rest of the dock. Even mild temperature gain can have significant impact on neighbouring eco-systems; and
(iii) swimming pool construction materials that will remain in the dock (plus pollution cause during the installation process itself).

(c) Destruction of visual amenity of the dock: Greenland Dock is unique in South London. I do not believe there is another dock of its size, visual amenity and lack of congestion. It is a treasure within Southwark, has been rightly treated and defended as Borough Open Land in the past, and its visual amenity should be maintained to the fullest extent possible. The proposed swimming pool will materially impair the beauty of this extremely unique and treasured dock.

(d) Significant waste of energy: An open-air heated pool of the vast size being contemplated will take significant amounts of energy to heat and there will also be vast loss of such heat into the environment given the open-air nature of the pool. This is wasteful energy expenditure and should not be contemplated in an ear where the government is strenuously advocating energy conservation.

(e) Parking: The proposal will likely result in increased parking being required, which is not easily available. The new residential tower on Rope Street - Tavern Quay - has already is already expected to increase parking pressure on the road. Parking along Rope Street (i.e. on the road itself) is already at capacity.

(f) Cannot be used as envisaged: Despite the propose pool being heated (with its accompanying environmental concerns) it will not be available for use throughout the year. In the colder months (which is more than 6 out of every 12 months) it will not be feasible to use the open-air pool due to the swimmers being exposed to cold air. This will result in all of the problems above being suffered, with no countervailing benefits (nearby indoor swimming pools already exist) to establish a structure that won't even be capable of use for significant portions of the year.

I wouldn't personally use it myself but I do support efforts to breathe some life into what is a pretty moribund area. Outdoor pools exist all over London so why not here?

It's highly misleading to suggest that Virgin Active in Canary Wharf is some how a plausible alternative when gym membership there costs £105 per month (and £50 signing fee) and a return trip on the Thames Clipper would cost £8.40! I would therefore not call it easily accessibe and it's a bit of a stretch to suggest that it's in the 'local area' (or indeed 10 minutes away from the site).

Also if the pool is not available all year round, then surely there won't be any noise or parking problems during these periods?! What about the existing noise from the sailing classes etc?

The Watersports Centre has a large car park - it's rarely full and even when it is, I'm willing to bet that it's due to local residents parking there for free rather than actually using the centre and its facilities.

This looks awful on all fronts
1 Visually - I enjoy walking along the dock, looking at the water and the swans, ducks and other waterfowl. Not looking at a blue and orange monstrosity. The aqua centre is enough of an eyesore as it is
2 Noise - it is currently a peaceful place for a walk on weekday mornings and evenings and only the yachts and occasional jet pack person at weekends. This will be replaced by a lot of noise
3 - smell - if chlorine is used to keep it clean, the smell will transmit across the dock
4 - energy- as per at least one other comment, how much energy will be used to keep an open air pool warm
5 wildlife - I do not see anything in the planning application explaining how this is not going to frighten off the swans, geese, cormorants, grebes and the apparent abundance of large carp and other fish. All of the above, noise, smell and heat from the pool escaping into the dock, will be detrimental to the wildlife.

Please do not permit this to go ahead. From the comments about sufficient swimming facilities being available nearby, this just appears to be a money making exercise, not a balanced answer to overriding community needs