Taking advantage of the late morning low tide yesterday, I took two friends down into the foreshore mud.  They had never ventured onto the Thames foreshore before, and we had for a thoroughly enjoyable few hours fossicking around.  We descended the stairs at the Surrey Docks Farm, crossed in front of Nelson's Dock at the Hilton Hotel (Cuckold's Point) and walked as far as the river would let us before climbing up the stairs at Columbia Wharf and walking to the Old Salt Quay for a bit of refreshment. After that we went for a potter along the foreshore at Hanover stairs, where the houseboat is moored, and where there were three Egyptian geese at the edge of the water, looking distinctly exotic and out of place.  We went to look at the old ships timbers that still lie near Clarence Pier before going for a wander along the water's edge. 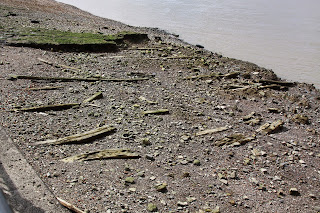 Having seen what people pull off the foreshore at Greenwich and much further upriver I know how spectacular and fascinating some of the finds can be, but Rotherhithe produces much more modest offerings. The nicest piece of the day was a beautifully decorated piece of clay pipe bowl, with what looks like a climbing rose on the bowl itself and a traditional leaf pattern along the seam. 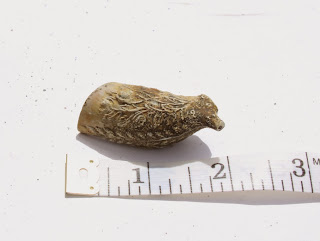 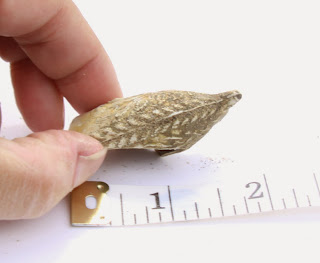 We picked one piece of pipe stem that was marked with the word PLUMSTEAD.  On the other side it reads very clearly H. DUDMAN.  A bit of pootling around on Google reveals that the maker was one Henry Dudman of Plumstead, Surrey, who was manufacturing clay pipes in the 1800s.  He lived at 71, Bloomfield Road, Plumstead, and pipe manufacturing was his livelihood. 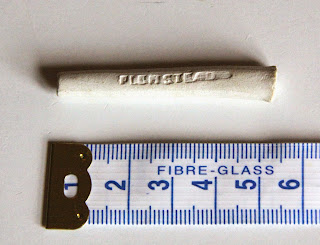 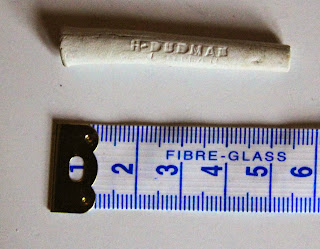 The Egyptian geese (Alopochen aegyptiacus) were lovely.  Originally from sub-tropical Africa, they were introduced into English country estates in the 17th Century for their ornamental properties.  Unsuited to the climate, they had a tough time surviving our winters, particularly as they breed in January, but eventually adapted and began to breed successfully.   They settled in Norfolk and although I've never seen them before have apparently spread extensively into the London area following a population explosion due to milder winters and the survival of more chicks. 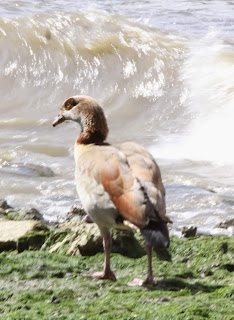 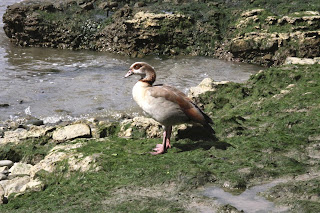 We wandered by the side of Surrey Basin and through Russia Dock Woodland, which looked lovely in the sun.   Huge thanks to Jeanette and Elaine for a great day.