Work to be carried out to restore water levels in RDW 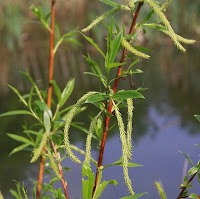 It is good to see the local ponds and marshes coming back to life. I saw lots of small fish and a common pond skater (Gerris lacustris) in the Stave Hill pond, plenty of aquatic birds on Globe Pond, and yellow flag lillies and various reed types springing to life wherever there are year-round damp zones.
Steve Cornish, the chairman of the Friends of Russia Dock Woodland, recently sent round the good news that the ongoing problems with the water supply could be near to remedy. One of the problems with supplying water to the ponds and channels is the state of the water pipes which deliver water to these areas. They were originally made of corrugated metal which encourages sedimentation. At 25 years they are also well past their sell-by date, allowing the roots of plant life to crush them, preventing water flow. Next week it is planned to replace them with reinforced flexible polypipe which will resist silt build up and will be strong enough to fend off root damage.

The new water supply will prevent the drying up of key ponds and channels, which will ensure the otherwise endangered fish and invertebrates on which much of our local birdlife depend, including the herons and kingfishers. The loss of these waterways would have undermined the valuable biodiversity of the parkland.

An article in The Guardian newspaper entitled "Digging for biodiversity: return of the humble pond" highlights the importance of small ponds for the protection of all types and size of wildlife in this country (31st January 2009). Many new ponds are being artificially created by a numebr of groups, including Pond Conservation in order to protect an increasingly endanged form of ecosystem: "Ponds have long been the poor relation of freshwater - dipped in by children, but largely ignored by grown-ups and scientiests. Partly as a result, maps and government surveys suggest that in the last 150 years the number of ponds in Britain has halved. Of those that have survived, eight out of 10 are now damaged by falling water tables, pollution running off farmland, roads and urban areas, and invasion by alien species". Experts are now estimating that two thirds of all freshwater species in Brtain live in ponds rather than in rivers or lakes and that the threat to ponds is significant threat to freswhater biodiversity. A new project called The Million Ponds Project has been launched to address this problem. Many of these pond schemes, such as those already established in the 1990s in Pinkhill next to the Farmoor reservoir near the Thames at Oxford, ahve become a phenomenal success. Those at Pinkhill, for example, are now home to 85 species of wetland plants and 165 different invertebrates, including many less common species. See The Guardian's website for the full story by Juliette Jowit which has a list of the ten most common and the ten rarest pond life species.
It is good to know that in the Russia Dock Woodland and Stave Hill Ecological Park, as well as elsewhere on Rotherhithe, the promotion of freshwater biodiversity is helping to address a nationally recognized problem. 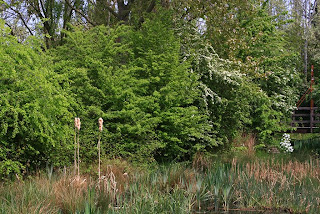 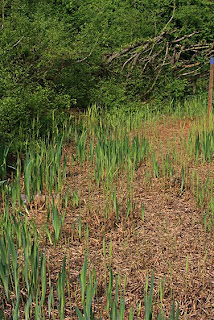 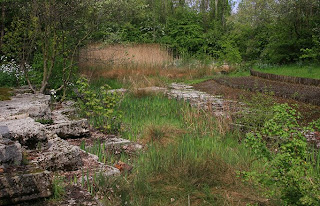 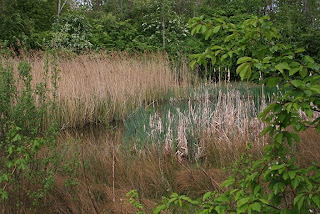