Sunday with the macro lens I was in the park by 2pm yesterday, and had abandoned the telephoto lens in favour of the macro lens.
I am having all sorts of difficulties with the camera at the moment due to the requirement, imposed by a serious bout of conjunctivities, to resort to my specs. Trying to use a camera with my glasses has turned out to be an unexpected challenge. Anyway, here are some of today's results, as mixed as they are.

Quite unlike Saturday, the park was absolutely full of bodies when I arrived on Sunday, yesterday. There were a group of four eastern Europeans having a quiet picnic next to the curving path next to Waterman's Walk and when I arrived at the green there were dozens of people enjoying themselves. Another group of eastern Europeans were enjoying a spirited football game and there were couples watching them and individuals 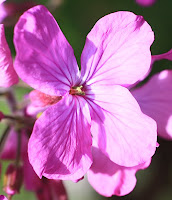 sitting in the sun reading books. The atmosphere was very good, with everyone in great spirits.

Left is a close-up of an Honesty flower (Lunaria annua) which is spreading happily throughout the woodland and ecological park. The flowers will be present until June, after which the oval-shaped translucent seed pods will remain, if they aren't taken by flower arrangers!

New since Saturday were red campions, which had come into flower in a corner of the ecological park where I had been standing only the day before and elsewhere (bugle, white comfrey and ground ivy).

An unexpected patch of primroses, quite extensive, had probably been there for a few days but I had missed them, and they look lovely in amongst the cowslips. I saw several squirrels but no foxes.

The ponds were much as they had been on Saturday. There was a lone moorhen on Dowtown Pond, I saw lots of fish and pond skaters at Stave Hill Pond, where there were also a pair of mallards and there was the usual mix of mallards, coots, and moorhens on Globe Pond, with two Canada geese in evidence. 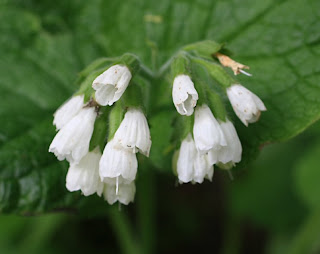 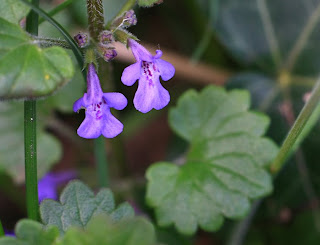 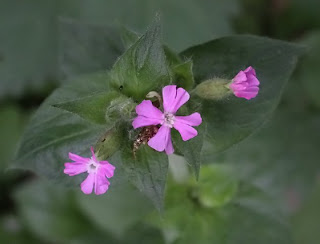 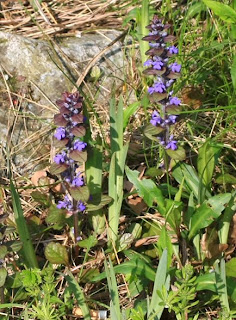