Go down to Kew in lilac time, wrote the poet Alfred Noyes in a ditty called The Barrel Organ, which sang the praises of the blossoms and birds in the Royal Botanic Gardens at the height of spring. Shame he didn't mention the butterflies. 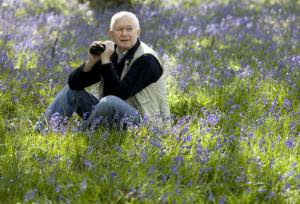 For Kew Gardens is where The Independent began its own part of the Great British Butterfly Hunt this week, with auspicious results. In the course of a single visit – with lilacs and bluebells blooming – we spotted six of the dozen early-spring butterflies we have already profiled. With casual sightings earlier of two more, this takes us up to eight species in our attempt to see all 58 British butterfly species in the course of a single summer – and April is not yet over. Today we once more invite readers to join in the hunt, not least as a low-cost cheering-up exercise in the current economic gloom. Butterflies are free, remember, in more than one sense: free-flying, which is a great part of their charm, but these most beautiful of insects cost you nothing to gaze upon. We invite you to join our quest to see as many as possible, and the person sighting the most will win a special safari with the charity Butterfly Conservation, to search for the last and most elusive of all the British species: the brown hairstreak.

To enter, briefly record your sightings as you make them – native species, exact location and date seen, and your name – on the butterfly blog page which is now on our website at independent.co.uk/britishbutterflies (write the sighting under "leave a comment").

Record them also in your own butterfly diary and send us this, with a short (no more than 250 words) description of your hunt as a whole, by 12pm on Monday 17 August. Enter by post (Independent News & Media, 2 Derry Street, London, W8 5HF) or by email (britishbutterflies@independent.co.uk). Schools are particularly welcome to enter and below we give details of how to obtain The Independent's stunning glossy wallchart of all Britain's 58 butterfly species, which was first given away free two weeks ago. Schools, or indeed anyone who missed it, can now obtain a copy of the chart entirely free.

We suggest you start your hunt the way we did, in a local park, where many of the more common early-spring species will be visible (it is only later that you will have to start making special trips). You need a warm sunny day, because butterflies, like all insects, are cold-blooded and need to warm up before they become active; a rainy day will mean disappointment.

Your correspondent's local park, in South-west London, just happens to be Kew Gardens. This is a superlative butterfly site and well worth a trip. Although it is the world's most celebrated botanical garden, Kew manages its 300 acres for British butterflies (and other wildlife) as well as for its sensational plant collection, and the results are a pleasure to behold, with 28 species – just under half of the British total – having been recorded. One day this week, I went for a two-hour visit, and in the glorious spring sunshine with which we have been blessed, saw six different types of butterfly.

All were appealing but perhaps the most charming were the two which best personify the English spring – the orange tip and the brimstone, both to be seen in the conservation area around Queen Charlotte's Cottage in the gardens' south-west corner. The orange tip shows a dazzling contrast between its pure white wings and their jazzy orange ends, while the larger brimstone is like a fluttering, butter-coloured leaf (this may be the origin of the word "butterfly"). Elsewhere, two attractive brown butterflies were visible: in the collection of oak trees along the Thames was the speckled wood, chocolate brown with cream rings on its wings, spiralling up from sunny patches to chase off its rivals, and along the cedar walk was the comma, a warmer brown, with a characteristic flight pattern of flitting then gliding.

Small whites were everywhere, jinking over the spectacular seas of bluebells and landing on some to take their nectar. Fluttering around a hawthorn bush near the pagoda, I saw a small scrap of flying blue silk: a holly blue. Two earlier sightings had been casual, when I was not specially looking: on 5 April, in a cemetery on Merseyside, I saw my first butterfly of the year, a peacock, and in a garden in Dorchester on 10 April, I saw a small tortoiseshell.

Eight down, 50 to go. Next week, as The Independent's Great British Butterfly Hunt gets moving, we hope to bring you the results of our first expedition into the countryside for less-common species: the Duke of Burgundy, the green hairstreak and a couple of skippers.

How to get your wallchart

To help you take part in the Great British Butterfly Hunt we are offering something special: The Independent's spectacular, free, full-colour wall chart showing the 58 native British butterfly species, which has been widely praised.

As some readers may have missed it, and schools in particular might have done so because the chart was first published during the Easter holidays, we are offering it again. To receive the chart free, with free postage and packaging, visit www.independent.co.uk/promo-offers and input your details, using the reference code BUTTERFLIES.

Wallcharts will be sent to the address provided, by second-class post. Offer available while stock lasts.