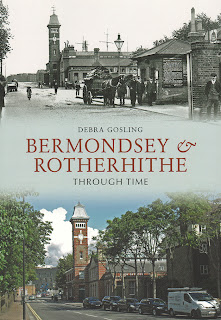 I previously reviewed another book in this series, Geoff Lunn's Port of London Through Time.  That was a look at the Thames and its maritime traffic.  This looks at the inland areas of Bermondsey and Rotherhithe, juxtaposing images of the past and images of the present.  There is no map of the area that the book purports to cover, but flipping through the pages, its scope extends from London Bridge and Tower Bridge in the west and extends east to Rotherhithe. There is a good mix of municipal buildings, shops, churches and pubs, but comparatively few residential or industrial scenes.

The comparisons between past and present are shown almost exclusively in photographs, which means that the earliest images of each of these areas is usually only as old as the earliest photographs.  There are no paintings and very few engravings from further back in the past. Most of the "before" photographs date to the early 1900s, with some rather later, dating to the 40s and 50s.  The earlier photographs are mostly sepia or black and white, as you would expect, and the 2011 photographs are all in full colour.  In total, there are around 50 photographs over the 96 pages.

There is a one-page introduction, but unlike the Port of London book in the same series, this book is not divided into chapters, and the book has no obviously visible structure, jumping from area to area and back again.  There is no table of contents or an index and there is no map to show where these buildings are located. Given the absence of any way of navigating the book, the only way of searching for something specific is to start from the beginning and work your way through.

The format is very straight forward.  There are two images on each page, one from the past and one from 2011, with a paragraph of text to explain what is being shown. As you can see in the example below the emphasis is very much on the photographs and far less on the explanatory text. 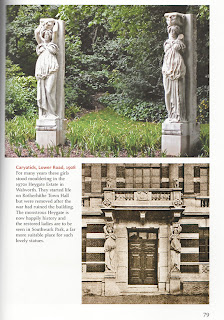 Most of the "then and now" photos are directly comparable, with shots taken from similar angles showing buildings that remain and those that have been replaced.  As you would expect, many of the before and after photographs represent radical changes and it is fascinating, if sometimes rather demoralizing, to be presented with the change from one state to another. A good example of this is the case of the elegant St John's Church in Horsleydown, which was built in 1736 and destroyed during the war; its foundations were used to build the modern and profoundly ugly London City Mission.  In other cases, however (as in the the cover image above, of the Rotherhithe dock offices, and the Peele Almshouses on Lower Road) it is remarkable, and reassuring, to see how some buildings have been so very well preserved that their appearance has changed very little over the decades, at least on the outside.  In the case of the Brunel Engine House it is a relief to see how well the 1995 restoration resurrected it from its ruinous 1980s condition.  Sometimes all that is left of a building is what was rescued after a building was destroyed, as with the pair of salvaged caryatids that flanked the entrance to the destroyed Rotherhithe Town Hall, now standing alone, but cared for, in Southwark Park.

Most of the photographs are of Bermondsey, which makes sense as it is by far the bigger of the two areas, and there are far fewer photographs of Rotherhithe. If you are interested in the old wharves and docks along the Thames waterfront in either area, there are virtually none of these (except for a past and a present photograph of Butlers Wharf).  And apart from a photo showing a group of deal porters standing on piles of wood, there are none of the old Surrey Commercial Docks in Rotherhithe, which seems like a major oversight given how much of the interior space of Rotherhithe peninsula the docks occupied, how much employment they provided and how much municipal and residential infrastructure they required. 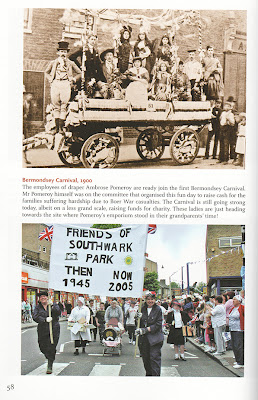 Although this is primarily a book of buildings, there are some good photographs of people engaged in different activities in the past - Bermondsey Carnival in 1900 is particularly good, but the two women standing in the doorway of the Bermondsey Bookshop in 1921 and the workers on their way in to Lipton's factory in 1928 are also fascinating.  There are only one or two photographs that have captured old modes of transport, like a horse-drawn tram, but these are well worth looking out for.

In summary, there are some fascinating photographs comparing the past and present of both areas, which demonstrate both the survivors and the radical changes that have taken place in Bermondsey and Rotherhithe.  If you are interested in what the area looked like before the 1900s this is probably not the book for you, because this is all about photographic representations and has very few earlier illustrations.   Likewise, if you are interested in Rotherhithe you may feel short-changed, because the emphasis is focused on the much bigger area covered by Bermondsey. Similarly, if you were hoping for some photos of the Thames frontage or the vast network of docks you will certainly be disappointed.  But this is otherwise a valuable resource for anyone interested in the past of  the general area.  The old photographs are really engaging, most of the modern photographs taken by David Toogood in 2011 are suitably clear and the print is quality good. The 2011 photographs will probably provide a useful resource themselves in future decades.

If you live or work in Bermondsey in particular, or are looking for a present for someone who does, this provides a good view of how the Bermondsey area (and to a lesser extent the Rotherhithe area) has evolved during the 1900s.  It is stuffed full of good quality photographs and it has a lot of charm.