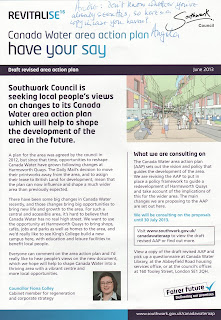 I've been away in north Wales for several weeks, so thanks to friend and neighbour Angela Woolhouse for putting a glossy information brochure about building plans for Canada Water through my door.  I hadn't seen it, and short of installing a crystal ball I don't know how I could have known about the consultation process because nothing was put through my door.

The four-sided brochure has been produced by Southwark Council and tagged with the name of Councillor Fiona Colley (Cabinet member for regeneration and corporate strategy).  It is dated June 2013 and was announcing a consultancy ending July 2013, so there's no opportunity to provide input into the process, but there's some rather interesting information in it about revisions to the agreed 2012 Canada Water Area Action Plan (AAP).

1) Harmsworth Quays
The Daily Mail are moving away and their lease on Harmswort Quays has been assigned to Briths Land for development.  This leaflet says that they want to use this space and adjacent sites to create a high street, or equivalent, with "shops, cafes, jobs and parks as well as homes the area."  They also want to see King's College build a new campus on the sites.  That's a lot of development.

2) Transport
Cycle routes would be incorporated into the new developments, which isn't of much interest (it doesn't address the ongoing problems with the existing infrastructure) but there's a somewhat curious statement regarding the current problems:  "We are committed to the agreed AAP strategy of reintroducing two way traffic on Lower Road and removing the gyratory to ensure that the road network is able to cope with growth in homes and jobs." I have no idea why they think that re-adding two-way traffic (which was introduced in the first place to relieve traffic problems, as bizarre as that may seem when you're sitting in one of numerous traffic jams) will wave a magic wand over local congestion and it would be interesting to hear their reasoning. 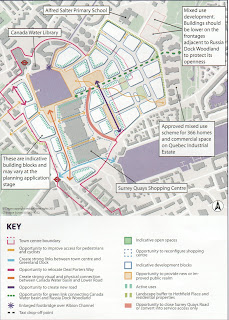 3) Leisure and Schools
Good news is that they "are committed" to refurbishing Seven Islands.  I hope that that comes off.  They are also planning a new secondary free school in Bermondsey rather than Rotherhithe.

4) Open spaces and green links
The Council is proposing the extension of open space protection to include Cumberland Wharf, Neptune Street Park, Surrey Docks Adventure Playground and the Former Nursery.   I don't know any of these sites, but I'm always in favour of open spaces being protected.

Unfortunately there's no mention of a commitment to protect Rotherhithe's biggest open space - Greenland Dock.  This has been under threat from plans to turn it into a vast marina, and there are no indications that these plans have been abandoned.

They are proposing a green link (a planners' daft euphemism for a pedestrian route between sites, usually accompanied by a few trees) throughout whatever development springs up at Harmsworth Quays.

5) Building Heights
To my deeply offended eyes the grizzly 26-storey Ontario Point was a terrible error by the planning officers that let it through.  If they were going to stick something that big on London's skyline it should have been something with merit and character, not a ghastly and unimaginative eyesore.  But it's there, and we have to live with it now.  We just need to make sure that nothing else that dreadful is accepted.  The Council's statement on building heights, however, is ambivalent in the extreme, and I quote it here in full:

"We are reiterating the agreed AAP strategy that most buildings at Canada Water should be between four and eight storeys.  However, in view of the opportunity to expand the town centre eastwards, we think there is also the potential for some taller buildings.  Designed well and in the right locations, tall buildings can create more public realm, an environment which is easier to walk and cycle around, as well as provide facilities which help create an animated and vibrant town centre.  Tall buildings should have the highest quality of design and care should be taken to ensure that public spaces around tall buildings are not overshadowed or windy.  Where buildings are significantly taller than the tallest buildings currently at Canada Water (Ontario Point has 26 storeys), they should provide a publicly accessible area on upper floors where feasible."

Talk about leaving in wiggle room!   I think that the argument that tall buildings are great because you can walk around them is particularly lame, but I also cannot understand why public facilities cannot be supplied in shorter structures, or how going up for 26+ storeys helps to create "an animated and vibrant town centre."

There's at least one moral of the Canada Water story to date, which is:  always be scared when you see the words "landmark building" in any planning proposal.  You could end up with another Ontario Point.

You can view the draft Area Action Plan (revised since the 2012 version) at www.southwark.gov.uk/canadawateraap

The consultation process is over, but if you have something to say it may be worth emailing them on the contact details provided, if only to point out that you weren't, like me, notified that there was a consultation process to which you could contribute!
planningpolicy@southwark.gov.uk

Oh dear, this does not bode well at all - and I totally agree that their 'justification' for the tall buildings is pretty pointless. As for offering a public viewing area 'where feasible', all that will happen is management will say it's infeasible because of security issues or something.

I am not surprised at the proposal to remove the gyratory - it is the trend these days, I think they are seen as divisive of local communities and they tend to encourage faster driving when traffic is light. As a cyclist I'd certainly welcome improvements to this road, it's a nightmare to use especially the bit where you have to swap from one lane to another. All the same I'm not sure why the council has chosen to claim that it 'will help the road network cope' with future increases in traffic.

I think that you are incredibly brave cycling on the roads around here. I have a bike and use it in the local park and on the Thames Path but I haven't the confidence to go out in traffic. I drive, and I am always horrified by how many near-misses there are between cars and bicyles, but it is difficult to see how the current roads could be improved to handle more traffic, because widening them isn't an option.

If you want a copy of the full four-page brochure I can scan it for you.