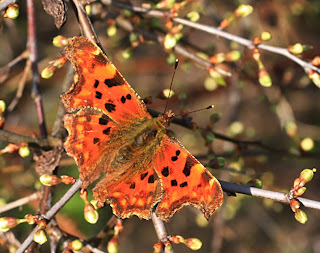 I was woken, for the umpteenth morning in a row, to the sound of coots on the dock. They make the most god-awful din.
I looked out at the bright sunshine and got up with the happy intention of going over the road to see what, if anything, had emerged since the weekend. It wasn't a particularly early start in the end, and I left the house at just gone 11am. But everything seemed to be fast asleep. There were only one or two birds crouching in trees, and I had the park to myself at first. But it soon started to wake up. My first happy sighting was a rusty coloured Wren, immediately followed by a gaggle of Blue Tits where the pigeons usually sit. I was attracted to them by the sheer volume of noise that they produced. 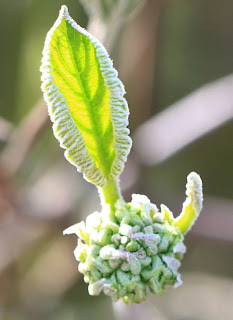 I went to see the Downtown ponds but there was nothing new to see. On Globe Pond there were several pairs of mallard, which was nice to see, and an inevitable bunch of coots, but no frogs or toads are spawning in their usual place.

Walking into the ecological park bird song was so loud that it filled the entire air. The most distinctive voice was that of the Great Tit, with its repetitive call, but I also saw sparrows, finches, robins, starlings and blackbirds as well as the much larger crows, pigeons and magpies.

The shapes and colours of new shoots and flowers continue to fascinate and enchant. Pink blossom has joined white, and the great clouds of gentle colour are lovely. I saw one small clump of primroses and they were super to see, an unexpected pleasure.

There was more insect life than in previous weeks. There were several flies and I saw a number of comma butterflies including one which stayed quite motionless for several minutes in the sun. I also saw a couple of 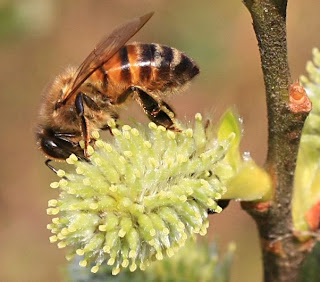 white, but they were too far away for me to identify. Honey bees are taking advantage of the pollen-laden pussy willow which is all over the ecological park and the woodland, and there were a couple of bumble bees in the grass.

There were no foxes to be seen but I saw too very busy squirrels.

I walked back via the Downtown site where metal railings are now in position around the compass. There was no felling taking place. Other work being carried out between the Health Centre carpark and the road appeared to have something to do with large piles of sand or earth.

I crossed the rbidge and had the Thames Path entirely to myself, which was an eerie feeling. 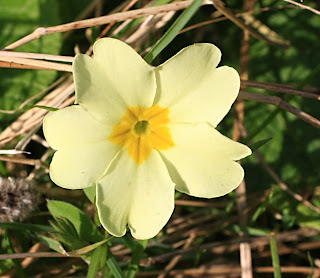 Walking back along Greenland Dock the peace was only broken by the wretched coots, which were tearing the air apart with their screams. As soon as one starts the others all join in and the din is deafening. Apart from the coots the only other birds that saw were a handful of seagulls, three mallards and two swans.

The scene at the Moby was entirely different from that of the previous weekend. When I rounded Tavistock Tower at 1230 there was simply no-one there. All the benches were empty. The contrast betweeen the heaving chaos of Sunday with the over-heated people, the semll of chips and ketchup versus today's peaceful quietness was truly remarkable. Not that I have anything against chips and ketchup but it was all a bit overwhelming in the warmth of the day.

The weather forecast predicted cloud for the afternoon, but I am glad that it was wrong. It has been an idyllic day. 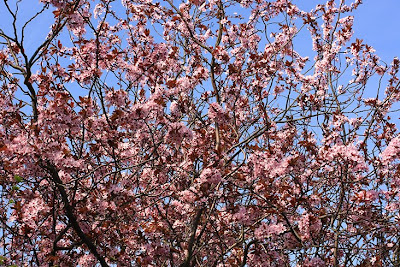 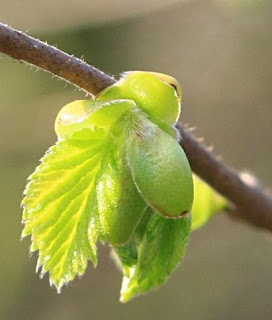