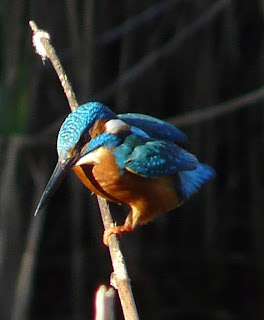 Wonderful news from Steve Cornish. He has been watching a pair of kingfishers at the Downtown Pond. The photograph is one that he took very recently.

Steve says that the kingfishers have been fishing the pond for over two weeks now after a short summer break. This is now a regular pattern aand Steve believes that the pair feed along the woodlands waterways from early spring until summer then spread their territorial wings further afield when their food source is in abundance.

He has two theories for this pattern. The first is that they come back to Russia Dock Woodland around October or November because the water temperature is slightly higher due to the underground heating pipework feeding the houses around globe pond. this is why we get duck weed problems all year round particularly close to mahogany pond.

His second theory is that the shallower waters in the woodlands are much better suited to kingfishers visual hunting skills during the winter months where smaller fish such has sticklebacks will go into deeper water around the docks.