Reed warbler at Downtown Pond and a mixture on Greenland Dock 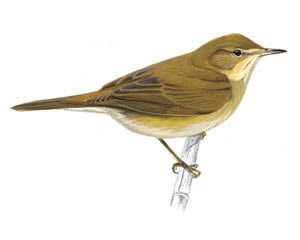 Steve saw a reed warbler in the rushes at Downtown Pond on Saturday afternoon. Sadly he was unable to photograph it in time, but it is lovely to know that it was there and will hopefully become a regular visitor. The photograph to the left was taken from the reed warbler page on the RSPB website, where you can also see a short overview of them. They are migratory birds which winter in Africa. The warblers can be very difficult to tell apart but of those that favour waterside environments only the reed warbler is common in the UK, with the marsh warbler being much less common and others being rarer still.
Steve also saw two terrapins sunbathing in Globe Pond as well. I've seen a large terrapin there before too, and one has to wonder how many of them there are living in Globe Pond.

Today I went up to Yvonne's shop (the Mace on Elgar Street) to get a freshly baked French stick, which was still warm when I picked it up. On the way back I walked along Greenland Dock and there was more aquatic bird life on the water than I have seen in a very long time. There was the usual aray of seagulls, coots, moorhens and mallards. But there were others to see too. 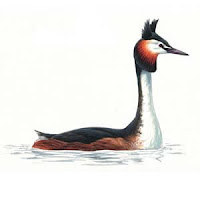 A great crested grebe was swimming along with a tatty light grey adolescent at her side. It was really quite a large chick and I was amazed to see it climb onto its parent's back as they do when they are tiny. I had no idea that they continued to cadge a free ride that late in life . The parent remained completely unruffled - and didn't sink.

There was also a family of mute swans - both parents and three nearly-grown mottled brown cygnets.

There were four very pale light brown ducks, similar in appearence to female mallards but much lighter and less varied in shade and colour. I was not close enough to see enough details to match them up with my bird identification books.

A wagtail was hopping along the edge of the dock but took off as I approached. I've become very good at identifying different wagtails because they are ubiquitous in southern Egypt. On one memorable occasion I was on a boat on Lake Nasser and the wagtails were so accustomed to regarding the cruise ships as great big bird tables that it was possible to feed them by hand. They are delightful. However, the Greenland Dock wagtail from today was a complete mystery. It had all the mannerisms of a pied wagtail ut it was quite the wrong colours (for male, female or juvenile) but had a lot of grey markings and very few black ones. I wish that I had had the camera with me.

There are reed warblers breeding every year at Lavender Pond and Canada Water, but I've not seen them in the woodland before. Good news. Now let's hope the kingfisher who was a regular visitor to Downtown Pond last year will come back.

Do you think that kingfishers are likely, given the lack of moving water (in fact, the decreasing levels of any water)? My understanding is that kingfishers need moving fresh water before they adopt a home. I would imagine that the Downtown Ponds will need to recover substantially before that happens.

Whatever happened to Max Housego? He seemed to have a real feel for the RDW. If I recall correctly he had a Masters in water management. We could do with someone with similar qualifications and his level of interest to advise.

There was certainly a kingfisher visiting Downtown Pond fairly frequently last year, and catching fish there. Kingfishers don't live long in the wild, so I should imagine that it's not died now, but I hope another one will find us.