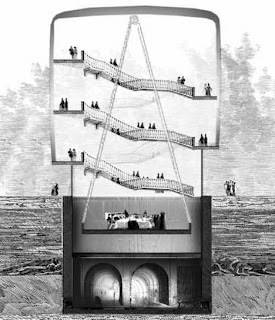 The winning proposal includes creating better public areas around the Rotherhithe museum and safe public access to a 15m diameter vent shaft and former stairwell — closed since 1865 — which leads to Brunel’s Thames Tunnel.

The tunnel, running between Rotherhithe and Wapping, is currently being upgraded as part of the East London Line extension.

Part of dRMM’s solution is a suspended mobile platform allowing public access to all parts of the museum — old and new.

See the above page for more details.
Posted by Andie at 08:29