Banshee 1847 - one of the last Admiralty-ordered mail packets


Not to be confused with the 1884 Banshee, built by Cammell Laird shipyard, the 1847 Banshee was a paddle steamer built by John Jenkins Thompson of Horseferry yard, Rotherhithe, who has already been mentioned as the builder of the paddle steamer Ariel.

In 1847 Thompson apparently leased additional space at the Barnard Yard (which was located along the stretch of the Thames where Odessa Street now runs) because the Banshee, commissioned by the Admiralty, was launched from there rather than Thompson's own Horseferry yard.  It is quite likely that this was because he had other ships under construction at his Horseferry yard at the time. The launch of Banshee, shown above in the Illustrated London News, celebrated by the crowds lining the dock and surrounding the packet steamer in small boats, and the publication of launch details in the Illustrated London News indicates that people in the mid 1800s London still took an interest in the details of newly launched ships.

Banshee was a paddle steamer designed by Oliver Lang (junior), one of four designers to win a competition in 1846 to produce four new steamships for the Holyhead packet service.  She was fitted with engines by Penn and Co, who were better known for supplying screw engines, and had two funnels.  She.was a particularly fast steamer. and was once timed at 16.3 knots. Robert Murray's Rudimentary Treatise on Marine Engines and Steam Vessels of 1852 says that she was entirely wood-built and although Irish Passenger Steamship Services, vol.2 by D.B.McNeill says that she had an iron hull, I suspect that Murray is in the right of it, because I have found no case of Thompson building anything other than wooden ships. It may be a case of confusion with the later Banshee of 1884, not built by Thompson, but which did have an iron hull 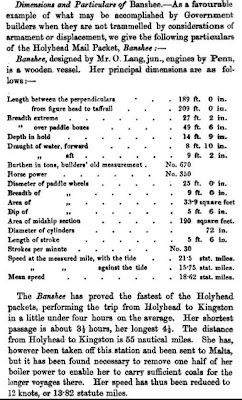 Murray says that she provides an excellent of example of "what may be accomplished by Government builders when they are not trammelled by considerations of armament or displacement". She was employed on the Holyhead to Dublin service, a run which usually took well over four hours but she was regularly the fastest vessel on the route, and once completed the Holyhead to Kingston run of 55 nautical miles in three and a half hours, which was a new record.

The packet service was taken over by the City of Dublin Steam Packet in 1850 after which Murray says that the Banshee was sent to Malta, a trip which required the removal of half her boiler power in order to store sufficient coal for the trip, effectively reducing her speed to 12 knots.  She was also taken into service as a gunboat in the Crimean War.

Thompson clearly gave satisfaction to the Admiralty with Banshee because he went on to build two Dapper class gunboats for the Crimean war, the Hind and the Jackdaw.