Sunbeam Weekly and the Pilgrim's Pocket 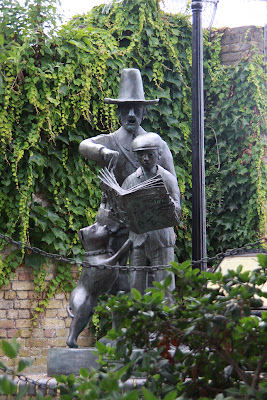 The story of the connection between Rotherhithe and the Pilgrim Fathers was the subject of a post a few days ago.  The bronze statue group commemorating that link, called Sunbeam Weekly and the Pilgrim's Pocket, sits on Rotherhithe Street at the end of Swan Lane and overlooking the Cumberland Wharf garden.

Created by local artist Peter McLean it was erected in 1991 and shows the ghost or spirit of a representative Pilgrim Father looking over the shoulder of a small boy in 1930s clothing, who is reading a magazine called the Sunbeam Weekly.  A dog stands on its hind legs, its front paws resting on the boy's legs, looking as though it wants to be involved. It is a Staffordshire bull terrier which is particularly appropriate for this area, where every other dog seems to be a staffie.  All three stand between a gas lamp.

There is a lot of additional detail to look for, if you visit the sculpture.  The ghost of the pilgrim in his tall hat has some interesting things crammed into his pocket:  a 1620s A to Z of London, a lobster's claw and a crucifix.  At the boy's feet are a pair of pliers, a pair of scissors, the head of a hammer, and a paint brush.  The magazine is full of imagery.  Looking over the boy's arm into the inner pages that he reads, the story of the Mayflower is shown as a graphic comic strip on the left hand page, and on the right there are images of modern America, including the Statue of Liberty, the Empire State Building, American cars, a stage coach, a cowboy, a rodeo rider and his horse and a U.S. soldier.  On the back cover of the magazine are scenes of the pilgrims and Mayflower, the ship that carried the pilgrims.  On the front cover are various images and the title "Uncle Pete and Kevs Sunbeam Weakly" (sic).

The sculpture is accompanied by an explanatory information board which has, understandably, deteriorated since the LDDC put it up some 20 years ago.  It needs replacing, because much of it is illegible, particularly in the section that covers the background details about sculptor Peter McLean.  The bits that can be deciphered are basically a CV of McLean's college past and the galleries in which he exhibited, and doesn't say anything about other items he produced.  However it also describes the brief to which McLean worked, which was to create something that reflected local heritage, to be figurative rather than abstract, and to aim for something light-hearted.

The sculpture attracts a lot of attention from people walking the Thames Path.  Whereas some public art in the area attracts only the odd glance as people pass by, this one really draws people in, and it is a pleasure to watch them exploring the details and having their photos taken with the little group.  Love it or hate it (and I've heard both opinions expressed frequently) it certainly makes people stop and look.  If the role of public art is to make people think about what they are looking at and what is represented, this one seems to succeed.

As usual, you can click on any of the photographs to see the bigger image, which may help to pick out some of the details. 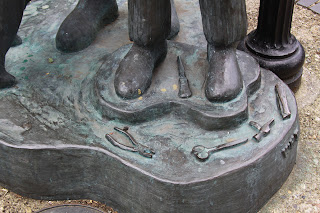 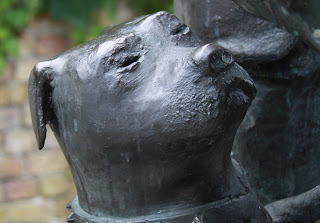 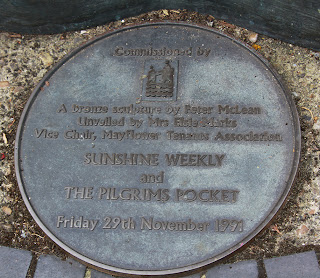