The Mayflower and the Pilgrim Fathers

One of Rotherhithe's better known bits of history is its connection with the Pilgrim Fathers of the early 17th Century.  There are several visible memorials to this achievement:  The Mayflower pub, named after the ship that carried the Pilgrim Fathers to the New World, a blue plaque, an engraved tablet and a modern memorial to Mayflower's master at St Mary's Church, and a modern sculpture commemorating the event on the Thames path. 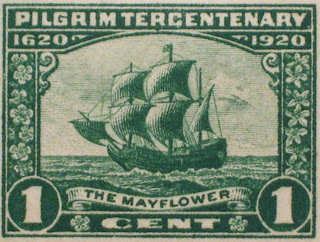 The Pilgrim Fathers were an interesting bunch, although I am somewhat embarrassed to say that I knew very little about them when I started writing this.  In 1586, under the reign of Elizabeth I, a group of post-Reformation religious dissenters were imprisoned in The Clink, Southwark, for beliefs that challenged the official Anglican religions.  Undeterred, they founded a prison church to pursue their religious interests, describing themselves as Independents, although they are usually referred to as Brownists.  The leading figures were John Greenwood, Henry Barrowe, Robert Browne, Francis Johnson, John Penry and Roger Rippon. They were temporarily released, and continued to practice their own religious ideas, for which Greenwood, Penry and Barrowe were all eventually executed, whilst Robert Rippon died in prison.  Some of the other members also fared badly. Francis Johnson travelled as far as Newfoundland to find a place where the Independents could settle without persecution, but settled in Leiden in the Netherlands, where he was joined by other believers from Southwark, where they were able to meet more freely. However, life was economically difficult in Leiden, and the group began to look at the possibilities of moving across the Atlantic in the wake of other colonists and missionaries. In 1620 they were given permission to relocate to America.

The original plan was for two ships to depart, Speedwell and Mayflower, but after a false start from Southampton on 5th August 1620,  Speedwell sprung a leak, and the ships had to return to England.  After a month the decision was made to abandon Speedwell so Mayflower left Plymouth on her own on the 6th September 1620, with 102 passengers, following a map published by famous explorer Captain John Smith.  She made land over three months later in North America on the 21st December 1620. Showing all the usual imagination of early emigrants to America, the settlers called their new home Plymouth.  Mayflower stayed with the Pilgrim Fathers until May 1621, before returning to England.  The pilgrims became icons of the quest for religious freedom, as well as being one of the very first colonies in America, and the only one that was continuously occupied.  There's a good description of the whole Pilgrim story on Wikipedia.  A replica of Mayflower was built in Brixham, Devon, which was named Mayflower II, launched in 1956, and is now located in Plymouth, New England, in North America, where she is a tourist attraction.

Mayflower was already quite an old ship when she took on the trip to North America in 1620, a three-masted and three- or four-decked Dutch cargo fluyt of around 180 tons.  She was part-owned by her captain, Christopher Jones.  Captain Christopher Jones was not a local man, although he was resident in Rotherhithe at the time of Mayflower's departure for Southampton.  He was born in Harwich at around 1570 and only moved to Rotherhithe in 1611. It was a popular place for sea captains to live in the 17th Century, and it is probable that Jones knew ship owner Edward Maister, whose will was posted on the blog a few days ago. Captain Jones died on the 5th March in 1622, in his early 50s, and was buried in the churchyard of St Mary's in Rotherhithe.  The church of St Mary's was rebuilt in 1715, by public subscription, due to damage inflicted by repeated flooding.  Many of the old churchyard monuments and memorials were lost during this process, and the exact location of the burial of Christopher Jones is no longer known.  Apparently there is a stone tablet in memory of him saved from the old church and set into the new tower's wall. There is modern monument to him in the churchyard of St Mary's, depicting St Christopher, the patron saint of travellers, holding a small child.  It was unveiled in 1995, to mark the 375th anniversary of the voyage.

Two other Rotherhithe residents made up members of the crew, John Moore and John Clarke.  John Clarke was the First Mate of the Mayflower.  He was baptized at St Mary in 1575, so he was almost certainly born in Rotherhithe, and he died in 1622.  Clarke Island in Plymouth Bay, Massachusetts, is named after him.

As well as the memorials to Christopher Jones, the event was commemorated by a sculpture that stands on the Thames Path, just downriver from the Mayflower pub.  The slightly larger than life-size 1991 statue, by Peter McLean, depicts one of the Pilgrim Fathers, a boy in 1930s clothing reading a magazine (called Sunbeam Weekly) and a dog, reaching up towards the boy.   It is called Sunbeam Weekly and the Pilgrim's Pocket. The Pilgrim Father, with a lobster, an A-Z of London dated 1620 and a cross in his pocket, looks amazed as he reads the magazine over the boy's shoulder, which shows scenes from America. The dog looks as though he is reaching up to see what the fuss is all about. People react to it in different ways - some people see humour in the light-hearted grouping, some say that it is very contrived, whereas others just find it peculiar.   Like all art, it is a personal thing how one responds to it.  There is also a commemorative blue plaque fixed to St Mary's Church, which celebrates Mayflower, her crew and her passengers.

The Mayflower public house was named for the ship that carried the Pilgrim Fathers.  It is not known exactly where the Mayflower was moored, or where she departed from when she left Rotherhithe for her first stop at Southampton, although there is a local convention that it was near the current site of the pub.  The pub's website claims that it was established in 1621 but although the pub has a satisfyingly ancient appearance it looks a lot older than it actually is. A pub near the site of the Mayflower pub called The Shippe is the oldest one recorded, and is thought to have dated back to around 1550.  A pub called The Spread Eagle was certainly established on this site, but it is not known how old it was when it burned down in the 18th Century.  It was replaced in 1780 with another pub, The Spread Eagle and Crown, but this was also doomed, and its top floor and roof were obliterated in the Second World War.  It was only rebuilt in 1958 when it was renamed The Mayflower.  An attractive building both inside and out, with a large jetty, its architects set out to evoke a vague impression of the past rather than impose a 1950s contemporary design on the area.  In spite of its recent date, its much older look makes it feel authentically connected with Rotherhithe's early history and that's rather nice.

As is usual with the local history of Rotherhithe, this is a story of ships and mariners.  The Pilgrim Fathers themselves set out from the south coast, and only the ship herself, the captain and the first mate certainly came from Rotherhithe, but it is still a great connection.

Perhaps lots of people have noticed this. There is a milestone in the wall of the Mayflower. Has anyone done any research on it. It says '2 miles from London Bridge'. Can't find anything on the net, but that might just be me. The only other local milestone is shown on OS maps before the Second World War - it was 2 miles from London Bridge and stood on the corner of what is now Surrey Quays Road and Lower Road. (although personally I thought it would have been easier to stick it round the corner in the park than lug it all the way down to the Mayflower).