Freehold for sale: The Clipper on Rotherhithe Street 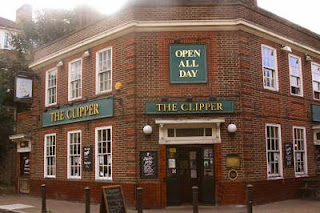 It's sad to think that another pub might close down, but it looks very much as though The Clipper, on Rotherhithe Street almost opposite the Hilton, will go the way of many other UK public houses.  The landlord Joe Springate, who is also the landlord of my local, The Moby Dick, has sold his lease back to the brewery, Enterprise Inns, who have put the freehold up for sale.

In spite of its somewhat unappealing 1930s facade it is a welcoming pub with genuine, friendly staff, a nice menu, with that indefinably traditional English-pub feel to it.  The building is substantial, with accommodation upstairs and a small garden, and although it is possible that it will be purchased by a company that will develop its potential as a public house it is probable that it will be bought by developers. 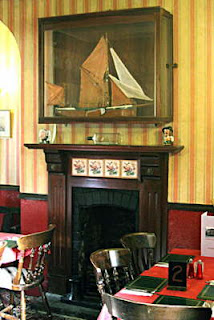 The current building dates back to 1934, the inter-war period during which a lot of building projects, including quite a bit of social housing, were initiated in the area.  Records show that a pub called The Ship Tavern was on this site since at least 1856, when the docks were expanding rapidly, drawing more people into the area.  The Clipper is named for the many tea clippers built on Rotherhithe during the 19th century, the last of which, and the best known was The Lothair, built nearby in 1870.

A number of local pubs have closed down in recent years, including the dilapidated Prince of Wales on Plough Way and The Three Compasses on Rotherhithe Street, reinvented as The Deal Porter, which also failed and is now a pizza restaurant.  It is great that the historic The Angel on Bermondsey Wall East, which looked in real danger of closing down, has been restored and is now thriving once again. At the mock-Tudor pub The Blacksmiths, near the Hilton, two Thai girls have apparently taken over the lease and are extending the restaurant's Thai menu, so it will be interesting to see how that fares.

Although not a particularly attractive pub on the outside, The Clipper has a lot of personality and it would be a real shame to see it go. With a good location just off the Thames Path, securing good custom from visitors staying in the Hilton, surrounded by housing full of potential clientele, and right on the edge of the Russia Dock Woodland, it does have real possibilities. It can be yours for a mere £750,000. 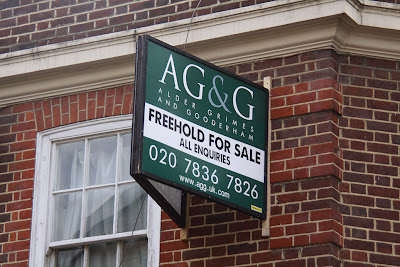 Just spoken to Enterprise Inns, who state it's not for sale! Would be interested to know where this story came from!!

Dear Anonymous, the information came from the following sources:
1) Joe Springate, landlord of the Moby Dick and former landlord of The Clipper, who sold his lease back to Enterprise Inns
2) The bar manager, Julie, at The Clipper
3) Apparently Southwark News has run a half-page article on the subject this week
4) Perhaps most decisive indication is the big sign on the outside of The Clipper that states "Freehold For Sale" in unambiguously large letters.

I would suggest that whoever you spoke to at Enterprise Inns is a tad out of date.

This is very sad. I was told last night by the staff that next Thursday will be their last day :(

Hi James. Yes, I heard the same from Joe, the former landlord. Julie, the manager, will be moving over to the Moby, but we are all waiting to see what will happen to the Clipper itself. It may not be the prettiest building in the area but it is a part of the 1930s heritage of the area and I would be so sorry to see it be replaced by a bland modern building. Best, Andie.

I think the Clipper is a great-looking pub - fine example of a tastefully restariend inter-war red-brick pub. It can still be saved. Don't take this lying down. An application to Greenwich Council for status as an Asset of Community Value needs to be submitted. That could prevent change of use.
Anybody there got time to do this? I am currently trying to save two pubs local to me, and don't have time to get involved with another. But I can help people do the ACV application, as I have done one before.

As I understand it, the Freehold has already been sold, but I don't know what the purchaser's plans are for it. The Clipper doesn't come under Greenwich Council - we're in Southwark - but they may have a similar scheme in place. If you don't mind emailing me, I would be interested in knowing what sort of work is involved with an AVC. andie [at] oddthing .co .uk.

I would also be interested. But if it has already been sold, is it not too late? The right is a right to bid: http://mycommunityrights.org.uk/community-right-to-bid/

Hi Omega. I'll find out what the status is on the Clipper and get back to you.

The Clipper is closed now. Apparently, sold for redevelopment but not clear into what. There is no planning application.

Is there any update on what's happening to the Clipper? Signs appeared outside warning against squatting.