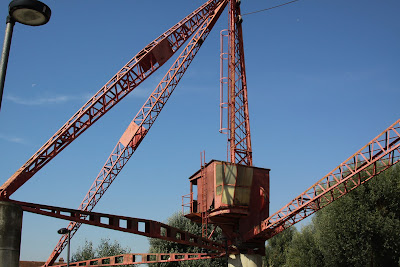 At the northern end of Odessa Street, where the Thames Path resumes its riverside route towards Tower Bridge (SE16 7LX), there is a red derrick. Various sources state that was the last remnant of two companies, one called Kemp, Collins and Co., who operated out of the now vanished Commercial Wharf, and one called Vitak Ltd, who occupied neighbouring Lawrence Wharf. Both were timber importers, and the two wharves seem to have been amalgamated at some stage to form one large operation.  The area today is occupied by the derrick (or crane), the basketball court and the youth hostel, shown in pale green on the map below, as well as some modern housing that sits along the Thames path.  A of March 2015 the red derrick is now under threat from developers - please see the petition to save it at http://chn.ge/1EHzH2E.

The Commercial Wharf and Lawrence Wharf operations were separated by Barnard's Wharf to the north by a road that led straight up to the Thames and was perpendicular to it (the old Thames Street on the 1868 Ordnance Survey map, which had been renamed Odessa Street by 1894 – this gets a bit confusing when you think of today’s Odessa Street, so have a look at the map below where the road is highlighted in pale blue).

Commercial Dock Pier ran to meet the Barnard's Wharf along Odessa Street's northern edge and certainly seems to have been a part of the Barnard's Wharf operation by at least 1894, when it was linked into their network of travelling cranes.  This stretch of road is now the slope that leads up to the crane.  If you stand facing the Thames with the crane on your right, the pier would have stretched out before you, extending beyond the low tide muds out into Limehouse Reach.

In 1894 the site was occupied mainly by one large building, which was not labelled on the Ordnance Survey map of that year.  Over the road, Commercial Wharf pier now linked to a network of travelling cranes that flanked a large open wet dock, the entire yard now labelled “Barnard’s Wharf” and it is unclear if the area occupied by Commercial Wharf was using, or had access to the pier.
By the time of the 1914 OS map Rotherhithe was a major timber processing centre, with six large timber ponds and numerous timber sheds, at the peak of its success.  At Commercial Wharf the 1894 building had been removed and only two small buildings are shown on the site, together with “Cranes,” circled in red on the map, and two mooring posts.  At Barnard’s Wharf, the network of crane tracks had been extended slightly but otherwise the site remains very much the same.  The cranes marked on the Scotch derrick site were not connected into that network, and again it is unclear whether or not the Commercial Dock Pier was accessible to those operating out of Commercial Wharf, or if the Commercial Wharf operation depended instead on cranes loading and unloading wood from the mooring posts marked on the 1914 map.

There is a 1937 photograph showing the derrick when it was still operational. surrounded by big piles of planks.  Similarly, next door at Barnard's Wharf vast piles of wood are shown stacked out in the open air.  Commercial Dock Pier is shown with two small huts on it, flanked by wooden dolphins.


The term "Scotch derrick" describes a simple crane that was frequently used in quarries, docks and boatyards, some even fitted to ships in the mid 20th century.  They are also called stiff-leg derricks.  The difference between a crane and a derrick is that the jib (arm) can be raised or lowered on a derrick, rather than the jib remaining stationary. They were used for lifting and moving heavy loads, larger ones had control cabins and they were usually steam-powered.  As you can see in the last photograph on this post, the Commercial Wharf Scotch derrick extended over the river so that it could load and unload vessels.

All I have been able to find out about Kemp, Collins and Company is that they were a limited company established in 1899, engaged in timber and spar importing.  At this time the timber import business of Rotherhithe was already a success, with timber ponds and deal sheds predominating in the surrounding area. It was re-registered on the 9th March 1926 (company number 00212271). Its head office was in Sussex, and although it is recorded that the company was dissolved, there is no date for this.  There is a record of a Caroline Kemp, who was a director of the company in 1992, which implies that the company itself survived into the 90s in some form or other, even though their Rotherhithe wharf was apparently shut down at a much earlier date.

Vitak Timber Importers Ltd. (company number 0525906) was established in 1953, and part of its business operated out of Lawrence Wharf.  The company not only imported hardwood timber for processing at Lawrence Wharf but had a sawmill for at the site, thought to be the last remaining sawmill in London until it closed in 1986, when the family sold the business.

Today, still mounted on a concrete column, the Scotch derrick is a monument to the wharf's past, and a reminder that this densely residential area was once something very different.  The old London Docklands Development Corporation's (LDDC) policy of preserving tangible pieces of the past was impressive.  The all-too-common loss of heritage for the development of apartment blocks, without any concern for giving residents a sense of the area's past, is always sad. 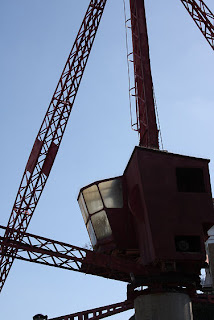 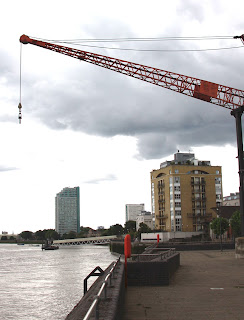 I am wondering whether you are aware of the recent plans by Southwark to redevelop the public land around the red Crane.
Apart from denigrating this field monument - which I have come to expect from planners and local politicians - they have shown a couldn't care less attitude which amounts to the Crane's destruction and cutting up.

I am trying to find out whether this is the last remain ing derrick crane from the Surrey Docks or even the whole of the London Docklands, which would strengthen the case for preservation. GLIAS is already on to it and English Heritage are in touch. The Open Spaces Society will advise on any action plan by the local community to oppose the privatisation of open spaces and public land.
Cheers
David Murphy

PS I have started a change.org petition on facebook (William Murphy/Save the Red Crane) and a website might be set up. Obviously the more expertise and people who wish to register their support the better. Many thanks.

David, thanks very much for this. Would you mind getting in touch by email to discuss? andie [at] oddthing dot co dot uk.