The Angel, now in splendid isolation in front of the remains of Edward III's mansion on the Thames Path at the western edge of Rotherhithe, has a history going back to at least the 17th Century.

At the very end of Bermondsey Wall East, it used to be flanked by a variety of buildings, all crowded together to make the most  of the valuable Thames frontage.  A few years ago I was sorry to see how run down and unloved it looked under the Courage brewery, but a couple of years ago it was rescued by Samuel Smith and received a major renovation and face lift. It now looks elegant, inviting and well cared for.

Grade II listed (470587), it dates to around 1830 and may incorporate parts of an early seventeenth century building. In the 15th century an inn and rest house for travellers called The Salutation was kept at or near this site by monks from Bermondsey Priory. In 1682 The Angel was in a position diagonally opposite its present site, and was referred to by the famous diarist Samuel Pepys as "the famous Angel."   The former Redriffe stairs used to be located immediately to its west.  In the 19th century The Angel was in the middle of a very busy stretch of tightly packed Thames businesses and, it has to be admitted, slums. There's an early 20th Century photograph showing the pub,with a large Courage brewery sign (today it is owned by Samuel Smith), flanked by a variety of small buildings and wharves, including, immediately on the other side of the stairs a company called "Platform Engineering." 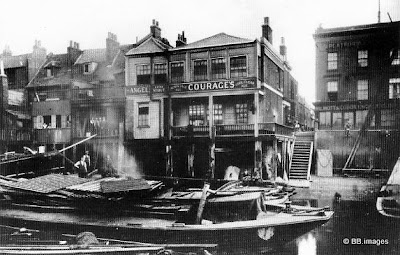 Local legend has it that Judge George Jeffreys (the "hanging judge") used to come here to watch mend die at Execution Dock, which was opposite, and that Captain Cook prepared for his journey for Australia here.  During most of the 17th and 18th Centuries its busy riverside would have ensured a rich but not always salubrious variety of clientele, from river pirates, smugglers and thieves to sailors and press gangs. In the early 20th Century its reputation and location attracted local artists including Augustus John and James Abbott McNeil Whistler. In the 1940s and 50s it became a popular destination for celebrities.  Today its customers are local residents, tourists and people walking the Thames Path.

It has two storeys, plus an attic. It is built of multi-coloured stock brick with a stucco cornice and blocking course.  The ground floor frontage is made of wood.  There area segmental arches on the first floor with sash windows, and it is topped by a low pitched slate roof. Its Thames frontage has an unusual  weatherboard gallery on wooden posts.   The interior is divided by wooden panels into five small rooms. In short it is a very fine Nineteenth Century building.

When you think how much a pub of this age could tell you if only it could speak, it's remarkable how little one can actually dredge up to bring its past to life.  I would love to have been a fly on the wall when the pub was at the hub of a vibrant, if occasionally lawless, riverside community. 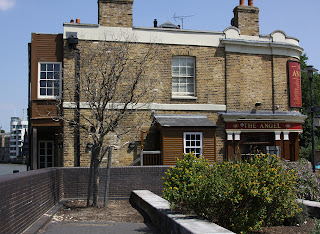 I was told my great grandmother ran the angel back in the 1900's,last name of Harvey. Be nice to know more history and sort fact from fiction.

Leave it with me Shirley - it may be possible to check, just so long as the pub was actually registered in her name.

Shirley, there's a list of registered owners on the pubhistory website at http://pubshistory.com/LondonPubs/Rotherhithe/Angel.shtml but there's no Harvey listed on it. That doesn't rule her out, of course, but you would have to dig a bit further. Perhaps Courage (the brewery that owned it) have a list of previous owners that you could ask them to check.