The Rotherhithe village watch house of 1821 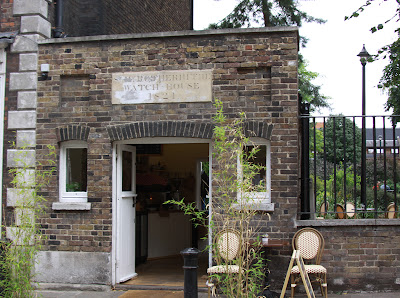 The tiny Rotherhithe watch house was established as a base for constables of St Mary's Parish in 1821. A rectangular stone plaque above the door confirms both the function and the date of the building.  As well as being a base for monitoring the streets at night, it was in a very useful position on the edge of the churchyard, or guarding against body snatchers.  Body snatching was a very lucrative and commonplace 19th Century activity, although illegal, because fresh bodies were always in demand by anatomists at Guys Hospital for dissection and teaching purposes.  Until 1832, the only other corpses legally available to hospitals were those condemned to death and dissection in the courts or the unclaimed bodies of people who had died in hospitals and poor houses.

The watch house was provided with a beadle (a parish constable associated with the church), a constable and 14 watchmen, operating in shifts during the day and night. There is a cell in the basement beneath the building, where suspects could be held.

The Metropolitan Police was formed in 1829 but before then a system that had been established in Medieval times provided a police service.  Appointed by the Crown, a Justice of the Peace was responsible for appointing constables who, in turn, appointed officers to assist him. Initially constables were not professionals, but were recruited from amongst local residents, but this was highly unpopular and eventually the position was formalized and salaried..  In towns, councils also appointed beadles who in turn appointed watchmen to patrol streets at night. Policing was organized on a parish by parish basis, with only occasional co-ordination between different parishes.  By 1822 around 3800 parish officers were employed in London.  For serious disturbances the army were employed to restore order.

The Rotherhithe watch house closed in the same year as the Metropolitan Police was established and there no police base in the immediate vicinity until 1836 when a police station opened on Paradise Street.

Today it is easy to find, located next to 70 St Marychurch Street, to which it is attached (the former charity school set up by Master Mariner Peter Hills, with the Portand stone statues at the first floor level). It now backs on to a small park and looks out over St Mary's Church. A Grade II listed building (number 471285) it is has one floor above ground and a basement level cell.  Characteristic of its period, and a good fit with contemporary Rotherhithe village buildings, it is built of yellow stock brick and has a stone-coped parapet and plinth, a lean-to slate roof, recessed panels on either side of its rectangular stone plaque and has gauged brick segmental arches.  It forms a pair with the fire engine house, the door and windows of which are now blocked in.

In good external condition, it is lovely that such a small corner of Rotherhithe village has been so well preserved.  At the time of writing it is a successful and attractive cafe with outdoor seating in the little park that was once St Mary's churchyard.  Diminutive buildings of this sort are usually allowed to decay and are eventually lost, so it is particularly nice to see how well this one is doing and how appreciated it continues to be in its new guise.