A great many thanks are owed to Elizabeth (Liz) Lloyd for sending me much-needed information about one of the barge building families in Rotherhithe, which I've supplemented with some additional hunting around.  Liz's grandmother was Edward J. Talbot's daughter. The Talbots were leading barge builders and important community members in Rotherhithe for more than three generations.

See Liz's article at the end of this post about Robert Talbot, the founder of the Talbot dynasty of barge builders.

Barges and lighters must have been built in their 100s along Rotherhithe's southern banks, but finding out about the companies that built them is far more challenging than looking into the builders of warships, East Indiamen and tea clippers.


The Talbot and Sons barge building business was started by Robert Talbot, who moved the business to a number of locations.  Robert died in  August 1849, and a copy of his last will and testament are now available on the National Archives website (be warned that the script is archaic and virtually illegible to the untrained eye). 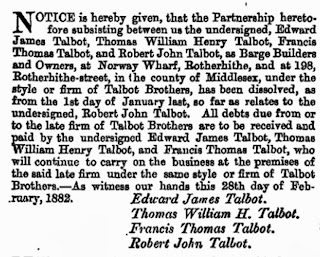 Talbot and Sons was based  at 292 Rotherhithe Street and when Lucy's husband Thomas Talbot died in 1858 it carried on as Lucy Talbot and Sons until she died in 1869 when it became Talbot Bros. Thanks to another reader, "PPM," who says that Lucy Talbot was born Lucy Rabjohn before marrying Thomas.  Liz says that one of the men in the photo above, which was taken between 1858 and 1869, was taken when Lucy was in charge after the death of her husband Thomas.

According to a notice that I stumbled across in the London Gazette, shown above and dated 3rd March 1882, Talbot Brothers was dissolved as from 1st January 1882.  The notice announced that the company trading as Talbot Brothers operating out of Norway Wharf and 198 Rotherhithe Street, was dissolved jointly by Edward James Talbot, Thomas William H. Talbot, Francis Thomas Talbot and Robert John Talbot.  Three of the brothers, Edward, William and Francis, started up a new company, somewhat confusingly also under the same name of Talbot Brothers. 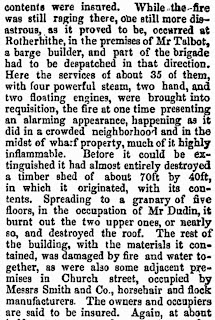 In 1866 the Otago Witness, a New Zealand newspaper, reported under the title of "Disastrous Fires in London" that a fire that broke out in a warehouse belonging to the Talbots in Rotherhithe was one of five fires that stretched the London fire brigade during the night of 28th April 1866.  35 firemen were dispatched to fight the blaze, with "four powerful steam, two hand and two floating engines."  It burned out the Talbot timber shed completely, before spreading to a five-floor granary owned by a Mr Dudin, destroying the roof and top two of the five storeys.  It also damaged the adjacent horsehair and flock manufacturing premises in Church Street owned by Messrs Smith and Co.   The Otago Witness says that it presented "an alarming appearance, happening as it did in a crowded neighbourhood in the midst of a wharf property, much of it highly inflammable."

An 1895 foundation stone from the destroyed Rotherhithe Town Hall lists members of St Mary's Vestry, one of whom is Edward James Talbot.   I have been unable to find out where the stone is now and why it was incorporated into the town hall, but it does demonstrate that the Talbot barge building brothers were people of station and prestige in the area at this time.

Reverend E.J. Beck mentions the Talbot family in his Memorials to Serve for a History for the Parish of St Mary, published in 1907.   At the time that Beck was writing, Edward Talbot, who had been the  the head of the family, had died in 1905. He was much approved of by Beck for being "long connected with parochial affairs:  he was a respected member of the Rotherhithe Vestry, and served all the offices, being sidesman and afterwards churchwarden of the Parish Church.  He was long a member of the Shipwrights Company, of which he was a past-master and treasurer" (p.191).  Beck says that Edward's nephews, Edward James Talbot and Francis Thomas Talbot, "were partners in a large business, building wooden and iron lighter-barges."  Both were both churchwardens and members of the Vestry.  Francis Talbot was also a member and alderman of Bermondsey Borough Council, and a "painstaking trustee of the Parish Charities."   Beck adds that there were other members of the family still living in Rotherhithe at the time. 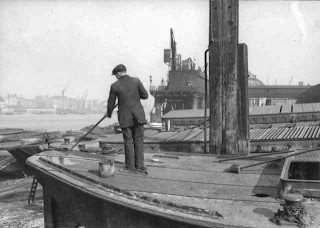 The London Street Directory for 1921 shows "Talbot Brothers, barge builders," at several addresses on Rotherhithe Street: "145, 147, 149 and 200  (Norway, Ransome's and Carolina Wharves) and Clarence Wharf."  Occupying several premises at the time, they were evidently very successful in the early 1920s.  The London Gazette of 22nd October 1944 reported that Caroline and Norway Wharves were due to be subjected to compulsory purchase orders due to war damage.

The photo to the left, from the Ideal Homes website, shows a barge being renovated in 1930 at the Talbot Brothers premises at 143 Rotherhithe Street, just down from the South Metropolitan Gas works pier, Clarence Wharf, which still stands today.

Liz says that the company of Talbot Brothers survived into the 1960s.


This  post is about one individual, Robert Talbot, who established Talbot and Sons barge builders.  His story is not confined to Rotherhithe, but travels around the country.  Following his career  provides an insight into the lives of those connected with ships and boats in the 1800s in the same way that the life of William Shepperd the great grandfather of Ian Walters, a steward on the tea clipper Borealis, was an insight into a certain way of life connected with a world that was held together by riverine and maritime industries.  As Liz's post demonstrates, barge building was taken very seriously, and a 7 year apprenticeships with the Worshipful Company of Watermen and Lightermen was required before barge builders, watermen and lightermen could rise through the ranks of the Company to take up prestigious positions.  They became senior members of the Company, and important contributors to the Rotherhithe community.
Many thanks Liz - a great insight into a life well lived!


Every descendent of Robert Talbot has been told the story of how he and his brothers brought the family barge building business up to London from Berkshire on a stage coach. Certainly there was a stagecoach route from Thatcham to London along the Bath Road and some time before 1799 Robert and Richard moved to London, as they were both married there in 1799. There is no evidence of any other living brother accompanying them. As Richard and his wife Elizabeth Jenkins do not appear to have had any children, Robert Talbot is seen as the founder of the barge building dynasty.


Robert and Richard were born in the beautiful village of Pangbourne, on the river Thames in Berkshire, the sons of John Talbot and Mary Ivey. Their other brother Edward died in 1792 and their sisters married in Pangbourne. Although there is no proof that John Talbot was a barge builder, there were other Talbots who built barges in Pangbourne at that time. As yet no family connection to these other Talbots has been made. After the death of Mary Ivey in 1795, John Talbot married Mary Kirton and had seven more children before his death in 1837 at the age of 92.

Robert Talbot married Ann Proud at St Andrew by the Wardrobe, near St Paul’s cathedral in 1799. At first they lived in Shadwell, a crowded dock area between Limehouse and Wapping, but by the time of the birth of their second child, Thomas Talbot in 1804 they were living by the Thames in Fore Street, Lambeth. Fore Street, as its name signifies lay on the foreshore of the river Thames. It was a very busy area of boat builders, whiting works and potteries including Doultons, later Royal Doulton.

By 1839 Robert had moved his barge building business to the up and coming boat building area of Rotherhithe Street. It is probable that all their premises were rented. Leaving Fore Street was wise, as by 1866 it was disappearing beneath the Albert Embankment.

Robert and Ann Proud had 8 children, before Ann’s death in 1830. Robert married again twice; to Ann Richards, a widow, in 1833 and to Cricey Finley in 1848, the year before his death of Asiatic cholera. Robert Talbot was buried in a graveyard on Lambeth High Street, near St Mary at Lambeth (The Garden Museum). The stones were moved against the walls by 1950 and have since eroded but it is a peaceful park with a children’s playground.

Rotherhithe in Victorian times, was a vibrant part of the Pool of London, teeming with Irish labourers, boat builders and sea captains. The “Fighting Temeraire” sailed into port to be broken up here in 1838 and the Mayflower had set sail from Rotherhithe in 1620. There were rope makers, sail makers and oar makers like George Henry Leggett. Large quantities of timber were unloaded here. Grain was unloaded into the flat-bottomed lighters made by the Talbots and other barge builders. The wife of Edward James Talbot, Elizabeth Palmer Hopkins came from several generations of lightermen.

Later Richard Talbot (b. 1813) moved his barge building business to Caversham in Reading, returning to Berkshire where his wife had been born. It was said that this was because so many of his children died in the unhealthy atmosphere of Rotherhithe. Robert Talbot (b. 1828) based his business at Strand on the Green and Percy Sutton Talbot established his at Wood wharf, Greenwich.