A visit to the Museum of London Docklands 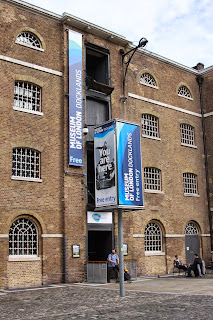 Yesterday I went with other members of the Surrey Docks Farm Heritage Project to visit the Docklands museum at Canary Wharf.  To my considerable embarrassment I had never been there before today.  I had missed out.

Admission to the museum is free of charge, but donations are much appreciated and well deserved.  There are four floors of the museum, plus a basement area that has meeting and conference rooms.  The ground floor has the information desk, exhibition areas and a shop.  The first floor is mainly dedicated to the Sainsbury Study Room, but also has some attractive displays about chandlers and Thames barges.  The top two floors comprise a chronological tour through London's docklands.  There is a floorplan on the Museum website at: http://www.museumoflondon.org.uk/docklands/visiting-us/museum-london-floor-plan/. 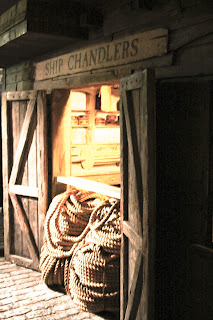 By paying insufficient attention to the more than adequate signage (i.e. my fault not theirs) I managed to start at the end of the chronological story, in the modern day, and work my way back through time towards prehistory , which felt a little like being in a time machine.  I wouldn't necessarily recommend that approach to other visitors, but it was certainly an interesting way of approaching local history!

If you follow the arrows, the tour starts at the top of the building with prehistory (of which there is inevitably not a lot surviving), covering Roman, Saxon, Medieval, and Tudor periods in quick succession until you arrive at the Seventeenth Century. At this point there's a vast and beautiful set of models of London Bridge in previous incarnations.

The chronological coverage from the Medieval period until modern times is far more detailed and really well presented.  Large display boards give details of different aspects of dockland life, from early ship building, through whaling and cargo handling in enclosed docks.  Objects are well chosen and provided with detailed labels (although a museum-management friend of mine would disapprove of the lack of accession details on the object labels). Videos provide more information and slideshows run silent black and white photographs.  Shops and workshops are mocked up realistically to give a real feel for what sort of trades and services were essential to dockland industries and living. 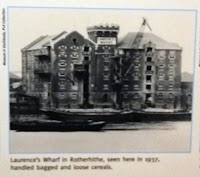 Of all the recreations, "sailortown" is the best, a very realistic reconstruction of the dark, narrow alleyways and small shops of the dockland rabbit warren that used to exist in Victorian times before the construction of St Katherine's Dock.  It was quiet in the museum and I was walking through sailortown on my own.  It felt quite eerie and oppressive, a very effective recreation of how many of these dockland areas must have been like. 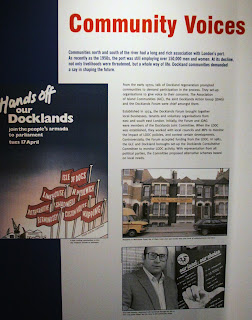 There are large exhibits on the docks during the Second World War (though nothing, interestingly, on the First World War), and a big display on the London Dockland Development Corporation regeneration project and the controversy it created.  I had had no idea that the proposals to develop the docklands for large property projects had been so vehemently opposed, and the displays showing details of the campaigns against the different projects were a considerable revelation.

The displays that cover the periods following the development of photography there are excellent silent black and white slideshows of pre-regeneration dockland areas, and photographs are used wherever possible on information boards to show scenes of everyday dockland life.

Because the approach is chronological rather than thematic or geographical it is very difficult to achieve a coherent view of any one set of dockland developments.  I mention this not as a criticism, because I am absolutely in favour of the chronological approach, which provides a historical explanation of how things occurred.  It does, however,  make finding out about a specific area rather more of a challenge.  From a specifically Rotherhithe orientated point of view, there are lots of photographs dotted throughout, and several earlier paintings too.  There's a section on whaling from Greenland Dock, and there are two builders' models of ships,  John Randall's 1795 HMS Acasta built at Nelson Dock and John and James Walker's tea clipper Lothair, built at Lavender Dock and covered on an earlier post (which I have now updated with the photograph of the model, which I hadn't known about).

From a photography point of view, I checked at the information desk and photography is permitted without flash.  The lighting is quite low and even with my camera set to ISO 3200, it struggled with the available light in many parts of the museum.  There's also a lot of reflection from the glass that makes it difficult to take good photographs of individual objects in display cabinets (see the light spots and reflections in the picture to the left).  Not a complaint - just information for those who, like me, always have a camera in tow.

The museum contains the Sainsbury Study Centre, a drop-in facility where you can go without appointment and which, as well as information about the Sainsbury retail organization, contains information about the docks.  There's a small book case with a mixture of different books about the Thames and the docks, although it's far from complete.  Although there were several books that I didn't have (and have now ordered) I have a dozen or so directly relevant books that their collection lacks - I mention this only because if you're thinking of going there on a research expedition it may not live up to your expectations.  It is a facility that supports light browsing rather than in-depth research.  However, there is also a Search Room, which is only available by appointment and can only handle limited numbers of people.  This gives access to resources from the archive collections, including maps.

All in all, the Museum of London Docklands makes for a good day out.  We arrived there at 1130 and all went our own separate ways.  I was there until gone 3.30pm.  That included an hour or so in the Sainsbury Study Centre, but the rest of it was just spent wandering around.   It is well supported by public transport and there are plenty of places to eat in the immediate vicinity, from a good pub immediately next door to some very nice restaurants overlooking the dock.

In case you are interested in trying to find out about the Museum of London Docklands from their website I should just add that the museum's website can be a bit of a pain.  It is a bolt-on to the Museum of London's main site, and some clicks take you away from the Docklands section back to the main Museum of London site.  It is because many of their excellent centralized online resources are shared across the museums, which makes the shared website approach understandable but still somewhat frustrating!

My thanks to Germander Speedwell for organizing it - I enjoyed the day enormously.