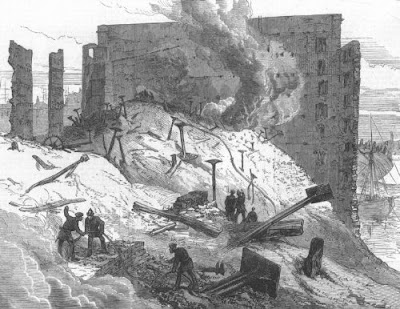 In the  23rd of December 1871 issue of the Illustrated London News showed an engraving of the aftermath of a fire in Rotherhithe on Thames Street, which apparently took place earlier in the ear on a fire that broke out on the 24th October of 1871.  The engraving, entitled "The Great Fire at Rotherhithe" shows members of the Metropolitan Fire Brigade surveying the still-smoking wreckage.   The burnt out walls contain piles of debris, whilst beyond them boats sit on the Thames.

There are very few details available about the fire, and even the establishment of Rotherhithe's earliest fire stations have been difficult to pin down to specific dates.  The 1871 fire took place at a time when  the way in which fires were being handled were changing, both from an administrative and technological point of view.

Rotherhithe had a long history of  fires, some of them devastating.  The great diarist John Evelyn, always a useful resource for local events, noted a severe fire on June 11th 1699 (thirty three years after the Great Fire of London), which destroyed nearly 300 houses, and a number of ships.  In June, 1765 another fire wreaked havoc in in Princes Street, destroying 200 houses, as well as commercial buildings.  In 1834 arson resulted in two fires in November and December, the second destroying the entire northwest  corner of St Marychurch Street; Beck says that "so much alarm and excitement prevailed in the parish that the  fire-engine was kept constantly parading the streets ready for action" (p.243).  In 1866, 35 firemen were sent to Rotherhithe to put out a fire that started at the Talbot barge building timber warehouse before spreading to the next door granary and a nearby horsehair and flock manufacturers. In 1903 it took 200 firemen to put out a fire in a malting warehouse in Rotherhithe.

A hand-operated water pump was established in Rotherhithe village in the early 1820s, with a twin facade to the Watch House.  The London Fire Engine Establishment (an association of  fire engine services provided by fire insurance companies) was abolished when the companies involved refused to continue to take responsibility for fire control in London following the Tooley Street fire of 1861.  The notorious Tooley Street fire raged out of control for two days and was not finally extinguished until two weeks later. Accordingly, in 1861 the LFEE was  replaced by the Metropolitan Fire Brigade, which was established by the Metropolitan Board of Works. The first station built by the Metropolitan Board of Works in Rotherhithe was in the early 1870s in Gomm Road (replaced by public baths in the 1960s), followed by another at Coburg Street (now Neptune Street). From at least 1868 there was a floating fire station off Platform Wharf in Rotherhithe (adjacent to today's Angel public house), and a record of fire stations in 1879 shows that it was still there at that date. It was not until 1903 that the Rotherhithe Street fire station at Pageants Wharf was established, and was equipped by Rotherhithe's first steam fire engine.

The building shown in the Illustrated London news was apparently the King and Queen Granary, which would partially account for the degree of destruction shown in the engraving, as the dry grain would have burned quickly and fiercely, taking the rest of the building with it.  It was built in 1822, downstream of the Bull Head Dock on the west of Rotherhithe, not far from today's Old Salt Quay public house. Before it burned down, it had seven floors and was provided with its own dock for barges.  It seems most likely that the floating fire station at Platform Wharf was responsible for putting out the fire.

As far as I can tell it was the subject of a protracted insurance claim which, in 1877, was denied due to the complications of the insurance polices taken out on it.   Here's a summary from the ProProfs website:

North British and Mercantile v London Liverpool and Globe (1877), more generally known as King and Queen Granaries.  Summary:  Dispute between the insurers regarding who should bear the loss. Merchant deposited grain at a granary owned by wharfingers. The Wharfiners insured the grain. The merchant had insured the grain as well. Following the fire claim by wharfinger, their insurer was seeking contribution from Merchant's insurance company. However, the court held that the insurer has no right to expect contribution if the persons insuring the risk are different, even if the risk insured is the same. Importance: Common Interest for contribution to arise