A working river's last hurrah before the bulldozers ball

Windows on to vanished worlds are enthralling, and few more so than the ten-mile photographic panorama of the Thames riverfront commissioned by the Port of London Authority in 1937. From London Bridge as far as Greenwich it records wharves, warehouses, boatyards, cranes, pontoons, piers, pumping stations, quays and watermen’s steps. Page by page, the 1937 panoramas are matched by the authors’ own panoramas, taken first in 1997 and repeated in 2008. 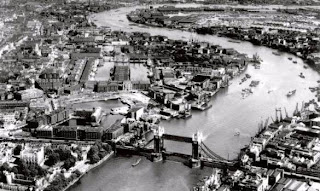 Here is the story of the Pool of London between London Bridge and Tower Bridge, of Shadwell, Limehouse and the Isle of Dogs, Bermondsey, Deptford and Rotherhithe.

The most telling photographs, across a double-page spread, are of the Wapping riverfront in 1937 and 2008, between Steam Wharf and St Helen’s Wharf, where not a trace of spice mills, colonial warehouses and river stairs remain. This was a world badly hit by wartime bombing but even more, as later photographs make chillingly clear, by crass 1960s clearances and rapacious 1980s redevelopment of docklands. Let the fate of St Katharine Dock never be forgotten, where the mighty warehouses by the great engineer Thomas Telford were felled one after another by Taylor Woodrow. A Warehouse (warehouses were named alphabetically) left the world in flames as a backdrop to a film about the Blitz (to be replaced by the hideous Tower Hotel). C Warehouse followed soon afterwards and B Warehouse was condemned as a brontosaurus, incapable of beneficial use. Since then the conversion of dozens of riverside warehouses as apartments and lofts have shown the needlessness of the sacrifice.

The photographs in the 1937 panorama are labelled above the buildings like 19th-century prints, naming intriguing places such as Oporto Wharf, Kidney Stairs, and the Limehouse Cut Entrance. Morton’s Sufferance Wharf specialised in preserved foods, chocolates and confectionery, Hubbuck’s Wharf dealt in paints and Blood Alley was named by the dockers because sacks of stick sugar chafed and cracked their skin. At Millwall Dock pneumatic elevators sucked grain from ships’ holds at over 300 tons an hour into a 13-storey granary, while Chubb, Round & Co’s fibre works produced rope and matting from mountains of coconuts.

The fascination of docklands warehouses is that they have an architectural language of their own, true to classical proportions and traditional window rhythms, and complete with arcades, parapets and cornices.

See the above page for the full story.
Posted by Andie at 02:26