There are so many pubs on Rotherhithe that it will take a while to cover them all. I've started with the ones with which I am most familiar. 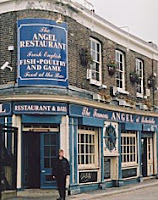 
Update: I've now covered The Angel in much more detail on a dedicated post with a lot of pictures: http://www.russiadock.blogspot.co.uk/2013/07/the-angel-public-house.html

One of the oldest Rotherhithe pubs, the site was first used when the Bermondsey Abbey monks used to brew beer which they sold to pilgrims. It is located at 24 Rotherhithe St, opposite Execution Dock in Wapping. The first documentary evidence of its existence was in 1652. It was possibly known as The Salutation.

It was built on stilts above the Thames marshes. Christopher Jones, captain of the Mayflower, is said to have hired crew here and Captain Cook prepared for his voyage to Australia from here. It enjoyed a large riverside clientele which includedsailors, pirates, smugglers, pressgangs and, in the 18th and 19th centuries, dockers. By the time that Samuel Pepys visited in the 17th century it was already famous. In the same century Judge Jeffreys was said to have watched the pirate hangings on the opposite times of the Thames, victims of his sentences. More surprisingly its riverside views attracted artists including James McNeil Whistler, Augustus John and William Wylie. There's a 1930s drawing in the Maritime Museum's collection of the Thames-facing frontage of The Angel on the Portcities website. In the 1940 and 1950s, The Angel's fame attracted celebrities including Laurel and Hardy. (Main source = Portcities website).

The Clipper (formerly The Ship)


Dating to 1934 this building is on Rotherhithe Street just down from Nelson Dock. There is, however, a record of a pub on the site in 1856. The Clipper was known as The Ship Tavern until the 1980s, when the whole of Rotherhithe underwent a massive face lift and development programme under the London Dockland Development Corporation. Many clippers were built by Rotherhithe ship builders of which the best know was the Lothair, built nearby  in 1870, and one of the fastest clippers ever built.


The Ship and Whale

Update: I've now covered The Ship and Whale in much more detail on a dedicated post at
http://russiadock.blogspot.co.uk/2013/06/a-nineteenth-century-pub-ship-and-whale.html


A pub name that evokes the hugely successful 18th century whaling industry which was the main function of Greenland Dock until the entire character of the whaling industry changed. The building, on Gulliver Street (formerly Derrick Street) was built in 1851. 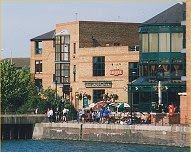 
A modern pub built in the early 1980s during the massive redevelopment of Rotherhithe and is owned and operated by Fullers. Like the Ship and Whale it was named, loosely, for the somewhat unfortunate 18th century Century whaling history of Greenland Dock, which it overlooks.

The present building looks as though it dates to the 1930s but the site was home to a former pub with the same name. In his "Maritime Rotherhithe History Walks" book Stuart Rankin says that a pub with this name in Rotherhithe is first recorded as The York in 1809, and may have been named after HMS York launched by S and D Brent in 1807, although the “ship” was not added to the pub title until 1835. As Rankin points out, by this time the York was in use as a convict ship and it seems a little odd to name a pub after a floating prison. Rankin speculates that perhaps the landlord had served aboard in happier times.


A pub with a great history, which has seen several name changes. The current building is not the original, that having burned down. It was originally named the Shippe Inn and at some point became The Spread Eagle. It was badly damaged by fire in the 19th century and was rebuilt as The Spread Eagle and Crown. Rotherhithe was heavily bombed during the Second World War and the pub lost both its roof and its top floor. It rebuilt again and was renamed The Mayflower Inn in 1958.

The 1958 name celebrates the fact that The Shippe was thought to be the departure point, in 1620, of the Pilgrim Fathers. The Pilgrim Fathers were not local people, but they departed from the Shippe Inn to en route to the . They returned to Rotherhithe in the May of 1921. In fact, none of the crew or the passengers were from Rotherhithe, but Christopher Jones, the captain of The Mayflower and one of her owners, was buried at St Mary’s Church in Rotherhithe on 5th March 1622. Sadly his grave was destroyed when St Mary’s was rebuilt in 1715, following the floods of 1710, but a memorial was erected to him that still stands (more details about the Mayflower and the Pilgrim Fathers has now been posted).


Now closed and replaced by a pizza restaurant, the name of the pub was chosen to recall the dock workers whose responsibility was to move vast piles of wooden planks called "deals". It was a highly skilled job and the deal porters were very much a part of the Rotherhithe landscape.

The earlier name, The Three Compasses was a pub on this site dating back at least to 1767. This stands on the corner of what remains of Beatson Street, which was named after a member of a Rotherhithe ship breaking family. The modern building was also named The Three Compasses and its name was only changed when it became the Deal Porters in 2008.


Another Rotherhithe Street pub, distinctive for its late 19th century mock Tudor half-timbered exterior  and 1930s interior panelling. It is first recorded in 1856.


A modern barn of a place, dating to the late 90s if I remember correctly. It is built at the former entrance to the Surrey Canal Canal, now Surrey Water.

I couldn't find out why it was named in either case. Rotherhithe did not have spice quays. Spices were highly valuable and subject to duty and were unloaded and stored in highly secure premises of the sort never built at Rotherhithe. I suspect that its name was nothing more than some sort of branding gimmick.


The  Orange Bull (formerly the Aardvark and before that The Fitchetts)


The Orange Bull was named by its South African owners in reference to a South African sports team.  Before this, also owned by South Africans it was called the Aardvaark, and was known by some of its patrons as "the pig" which refers to the animal rather than the building but is suitable for the building too because it really is an eyesore. The pub works as a hub for the local South African community.  Its earlier name, The Fitchetts, referred to a former landlord.


Some of the pubs which no longer exist are shown on the SE16 website. There were loads of them! There's an even more startling list on the History of Pubs in London website. One of their new additions to the list of closed pubs is the Quebec Curve, a modern pub which opened in the late 1990s and closed in 2008.