Rotherhithe Heritage 6 - A few introductory paragraphs to the 1800s 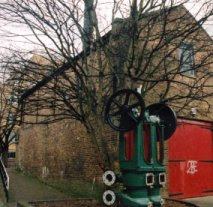 Well, I've covered the really easy bits of the area's history so far. I've sprinted from the Royal Docks of Henry VIII at Deptford, I've looked at the construction of Howland Great Wet Dock and I've dipped into the rather sad world of whaling in the same dock, renamed Greenland Dock. I've headed back in time over 2000 years. Now I've landed up on the turn of the 19th century, teetering perilously on the edge of a cliff that overlooks the entire industrial and social tornado that made up the 1800s in Great Britain. And I am getting closer to talking about the main subject matters of this blog - the histories behind Russia Dock Woodland and Stave Hill as well as adding to details about Greenland Dock.

It will be necessary to precis on a fairly grand scale, even within this small geographical area, and to handle the century in chunks. Life exploded in all sorts of directions in the Nineteenth Century and it is impossible to cover it in one post. Much of this was built on work that took place in the 1700s, which was a period of invention and scientific innovation in Great Britain. The experiments and discoveries were built on and invested in, and the ideas produced by a few remarkable brains were built upon by many others, running with new knowledge and taking the world into a new era.

In 1800 the world’s population reached 880 million and was ’s largest city with a population of 864,000. Rotherhithe itself in the centre rather than at the edge of water-based industry. This growth was set against a background of continuing political and military unrest in the UK and in Europe, in which Britain had an active role: the legalization of trade unions in 1824, the Reform Acts, trade union activity, the succession of Queen Victoria to the throne, the Napoleonic wars of 1803-1815, the Peninsular War of 1818-14, and at the end of the Nineteenth Century the Crimean War (1854-56) and the Indian Mutiny (1857). Between the 1830s towards the end of the Century, the successes already achieved by existing docks and ship building enterprises saw building all along the Thames, extending out to Milwall and Tilbury.

From 1800 onwards in Rotherhithe became an absolute patchwork of buildings, docks and ponds, physically connected in a bizarre and confusing way, and each specializing in a different form of business. Trying to follow its development is something of a minefield. Not only were new docks, ponds and channels added over time, but the connections between them were opened and closed at different times, businesses lived and died. Ship building was diversifying with new steam ships being built on Rotherhithe and an increasing number of wooden sailing ship builders turning to breaking and repairs rather than building. The first iron ship was build in local shipyards. Other industries included iron works, gun powder manufacturers, paint producers, warehousing and various services which served the employees of those industries. The population expanded, which meant that residential areas grew up.

Trying to gain a snapshot of the place at any one time is truly difficult. Even when the Surrey Commercial Docks was at its height in the late 1800s and the 1900s and peopled by numerous long-term workers, there were many complaints that the place was almost impossible to navigate on the ground. Hindsight should make matters easier but doesn't seem to be doing the trick, somehow!

So much of Rotherhithe has been demolished and replaced with new housing and associated shopping and other services that there are only a few places left to see in the flesh - the rest has to be pulled together from original documents and later research.

And I thought that the wild flowers were complicated :-) If anyone has any corrections to make please do feel free - but I promise that I am researching this period most carefully from good quality secondary resources with the aid of original maps, archive newspaper articles and prints.