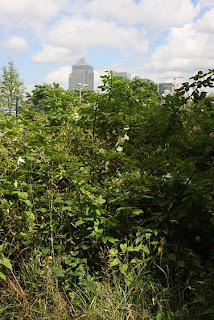 One of the things that I like about the Stave Hill Ecological Park and Russia Dock Woodland is that I catch glimpses of the world outside, at buildings where life is carried out at a frequently frantic working pace whilst I wander easily through the trees. Those glimpses always emphasise to me how much of an oasis we have here.
Following on from that I get a real sense of pleasure about the actual regeneration that the Park and Woodland represent. Not in the Tim Thompson sense of knocking down the Surrey Docks Farm so that yet another boat pier can be added, but in the Phoenix rising from the ashes sense. Well up until the mid 1800s Rotherhithe was laced at its edges with ship-based activities and docks but it was still divded from Deptford, Bermondsey and Southwark by fields and streams and market gardens. The massive urban expansion of the late 1800s and early 1900s created a bewildering mosaic of docks and ponds and a crush of buildings of all sizes and types. Shortage of land meant that every inch of it was used for industry and housing. Looking at maps and illustrations of Southwark in the 1700s I am always staggered by how many fields and marshes were elminated in the process of planned explansion. 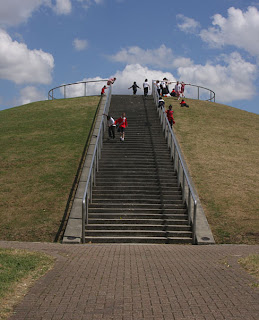 consideration to return some significantly pleasureable green spaces to Rotherhithe, a faint but very welcome echo of its rural past. Not only did the park make the new developments at Rotherhithe a more attractive proposition for potential buyers looking with some doubts at the very speculative dockland experiement, but it created another reason for us to stay here once the area took off. When you look at the photographs of the abandoned docks in the 1970s, the industrial carnage left behind, that little oasis is a minor miracle. In the days when the dockland innovations first took place "regeneration" was about more than adding endless new buildings to areas without the infrastructure to support them .

I was walking through the park today with my newly repared camera glued to my eye, and I could hear the laughter of children coming from Stave Hill. I rounded a corner and there they were - a small group of young school children, boys and girls, having a terrifc and good-natureed time playing on the rails, running up and down the stairs and laughing with each other. There was no shouting or pushing, no tantrums or squabbles, no tears or grumbles. Just laughter and enjoyment. A rare and beautiful thing these days!