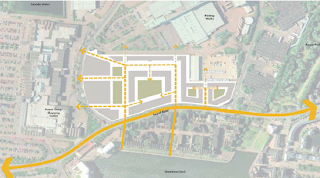 Thanks very much to Mark Del Canto of the Brunswick Quay Residents’ Association for forwarding me the PDF file showing Frogmore’s proposed plans for the Leisure Park site. Here is an extract from the introduction, but you can download the entire file in PDF format here.

The site is located in Surrey Docks ward in the London Borough of Southwark. Surrey Quays Leisure Site is situated to the east of Surrey Quays Shopping Centre and is currently used for entertainment and leisure facilities as well as on grade car parking. The existing first generation leisure boxes are nearing the end of their life cycle. The current layout of the site is outdated and arguably does not create a positive public space.

The site is identified in the already adopted Local Plan, The Southwark Plan 2007, which states that the site is suitable for a residential led mixed use development. The guidelines for the site indicate that the site could provide up to 1000 residential homes and that the cinema should be relocated on the site or elsewhere in the Canada Water area.

The site is also included within the emerging local area action plan which will help to guide and implement future development in the area.

Doubtless I haven’t been paying sufficient attention, but what is the “emerging local area action plan” all about?

Here is an extract from the letter that homes which will be impacted by the proposed development were sent by their management company, Russia Court Management, which draws attention to some important points!:

As you have probably gathered, there are plans afoot to completely redevelop the Surrey Quays Leisure Park site across Redriff Road from your home.

Incredible though it may seem, the site's owners have decreed that the cinema, bowling and bingo etc., are coming to the end of their useful life - even though the site was only fully completed ten years ago!

Last weekend, the developers - Frogmore - showed off their preliminary plans for the site to residents and interested parties. If you were unable to attend, then Russia Court has obtained a copy of the presentation - and preliminary plans.

The headlines to immediately note are:

It should be remembered that this is only an outline plan at the moment - but it does appear that Morley, the site owners, are committed to a dramatic reconstruction of the original site. (The Quebec Curve has already closed - and its future seems very uncertain at the moment.) A formal planning application to Southwark Council is anticipated for later in the year.

Although few local residents are probably very fond of the existing site - with its bleak, wind-swept appearance and immensely unattractive facades, these proposals have the potential to have a dramatic effect on the immediate vicinity:

At this point with the development, Frogmore, are apparently keen to hear the views and reactions of local residents. Attached you will find the presentation unveiled last weekend. Following shortly is a feedback/survey form. Although the feedback form would appear to be somewhat skewed in favour of the proposals- most of the questions are seemingly uncontroversial and it offers only the opportunity to "Strongly Agree" but not "Strongly Disagree" it is important Frogmore get a feeling for the views of Brunswick Quay residents. Respondents can also add further comments or objections.

Russia Court Management would urge all residents to make their views known - in an effort to get a new Leisure Park that actually provides wanted services and contributes positively to the attractive neighbourhood. Don't forget, you can also lobby our local MP, Simon Hughes - who was also present at the presentation on Saturday. (Simon@simonhughes.org.uk)