I was lucky with the weather yesterday. Having returned from a soggy visit to Bloomsbury, collecting my repaired camera and sticking my head into the British Museum to check on a particular artefact, I arrived at home just as the sun came out. So I grabbed the camera to put it through its paces, new firmware and all. You can see some of the results below. It seems to be back to normal which is a good reflection on the Canon technical team - not only did I drop camera and lens onto a large rock from the seat of a Toyota Landcruiser (partially destroying the lens, which I jury-rigged with parcel tape to last for the remainder of the expedition), but it was exposed to a sand storm a few days later. I've never heard a Tamron lens rattle quite like that. It is amazing how much easier it is to use the camera without desert sand filling every nook and cranny!
I turned out to be a bit too optimistic about how long the weather would hold out for me. A lengthy tour of my usual haunts found me at Stave Hill, and it was only a short trip from there to Spice Island for a Peroni in the sunshine. Spice Island is bedlam at the weekends but the garden tends to be almost empty during the week, and it is a good place to watch the Thames go by. But the weather only held for half a glass before the skies opened leaving me scrambling my scattered possessions together and jogging for cover. Stranded on the wrong side of Rotherhithe in the only pub around here that sells Peroni on tap it seemed silly not to order another, so I sat and read my book and enjoyed my beer until the rain eased off. And lo! the sun reappeared and I made it home without need of my brolly - which probably wouldn't have been much competition for the wind anyway.

Here are some of the new flowers that have burst into life since my last visit. Nothing very remarkable in the grand scale of things, but very pretty. And there are more to come.

The word Lysimachia is thought to derive from a combination of the Greek words luo "to loose" and mache "strife", although a second theory is that it was named after the King of Thrace Lysimachus who is alleged to have discovered the plant's medicinal value. Vulgaris simply means "common"

Chicory is an old Arabic word for a plant originally used as a salad vegetable (but derived ulitmately from the Greek kichore) and intybus is the Latin for endive, an old name for chicory 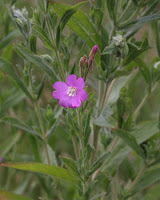 The term calystefia provably derives from a combination of the Greek words "kalyx" (cup) and "stege" (a covering). The term sepium means "of hedges" 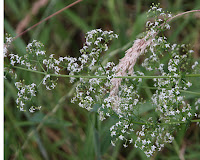 Galium, as I've said in a previous post, derives from the Greek word for milk, gala. I have no idea what the second part of the latin name means - my book stops short of that!
Posted by Andie at 05:37