This is the fourth in an occasional series about ships that visited the Surrey Commercial Docks.  The docks lived to receive ships that travelled to London from all over the world.  No commentary on Rotherhithe's history would be  complete without a conversation about the ships that occupied and visited the docks, from un-powered lighters and sailing barges to vast cruise ships and cargo carriers.  Although there were exceptions, like the Cunard A-Class liners that moored at Greenland Dock between the wars (discussed on an earlier post), most were cargo transporters.

This post looks at the the Beaver class cargo ships owned by the enormous Canadian Pacific company, which was as well known for its passenger cruisers and its trains as it was for its cargo ships.  The Beaver class ships that visited the Surrey Commercial Docks specialized in transporting perishables between Canada and Europe, and were an excellent example of strategic planning for the difficult trans-Atlantic crossing, where variable conditions made it difficult to keep to timetables.

The Canadian Pacific's Beaver ships were cargo carriers, and all of them were built to the same basic specification in the late 1920s, at builders on the Tyne and the Clyde in Britain. Canadian Pacific ran cargo ships weekly to London's Surrey Commercial Docks from Canadian ports at Halifax, New Brunswick and St John.  The advertising poster on the right shows a Beaver class ship on the Thames, with the distinctive brown sails of the Thames barges in the background and a steam tug approaching her.

There were five regular ships on the route based at the Surrey Commercial Docks:  Beaverford, Beaverhill, Beaverburn, Beaverdale and Beaverbrea, with other ships also operating on the route, including Beaverfir, Beavercove and Beaverdale.  The latter Beaver ships also used the Royal Docks in London.  The beaver theme derives from the company's logo which, from 1886 onwards, consisted of a crest topped with the image of a beaver, a Canadian national symbol and the ideal of a dedicated hard worker.  The exact form of the logo changed many times but the crest topped with the beaver were usually incorporated.

All Beaver class ships were 9956 tons, 495ft long and 61ft 6ins wide, with single funnels.  Steam being more dependable at that stage than diesel, the the ships ran their propeller drives (screws) through Parson steam turbines and all the auxiliary equipment required to support them.  Innovative automatic stokers installed as an experiment on two were so successful that they were then installed on the others of the line to replace manual stoking. I love this description of the ships from Frank C. Bowen's 1938 London Ship Types (page 97):

The hull, which is 495 feet long by 61 feet 6 inches, with a load draught of 27 feet, wad designed after careful tank experiments to obtain the utmost seaworthiness and to maintain its speed in a seaway, and with its cut-away stem and cruiser stern achieved these objects most satisfactorily, while it is most sightly to the sailor's eye and has nothing of the sardine-tine lines which are usually associated with a purely cargo ship."


Each of the ships was kitted out with cargo handling machinery to enable swift offloading of the cargo into lighters, so that there was no need to wait around for dock-side machinery to be free or to off-load cargo by hand.

But it was not all about the machinery. The Canadian company knew that if they were to specialize in high-maintenance perishable cargoes and run efficiently to the precise timetables so important for transporting perishables, they would need a top quality crew as well.  Accordingly, a lot of thought went into the crew's quarters in order to both attract and retain a quality team. The crew was accommodated in cabins on deck rather than in quarters below deck, and these were unusually spacious and comfortable.  Bower again, most entertainingly (page 97):

The traditional forecastle with all its discomfort is abandoned and officers and men are all accommodated in the bridge deck superstructure amidships, having small cabins which ma be compared with the first class accommodation of many ships only a few years ago.  Some of the old timers, it is true, complain that these cabins admit too much fresh air and that it is no longer possible to stop all ventilation with an old pair of trousers, as it used to be in the forecastle, but generally speaking the amenities are fully appreciated by the better type of seamen for who they were designed.

The cargo carried was varied, but included fruit, cheese, bacon, ham and lard, which had to be temperature controlled.  At a lower level of the ships' holds they also carried grain, specialized types of timber and other cargo that required higher than normal levels of care and maintenance.

In Greenland Dock the Canadian Cold Store was established in the early 1900s to accommodate dairy products and other perishables imported from Canada and its use continued until the war.  The warehouse was bombed and burned out during the Blitz in 1940.    The London Docklands Development Corporation (LDDC) archive photograph, left, shows it with flames pouring out of it's roof and windows.

Tragically, all of the Beaver ships were lost during the Second World War. Beaverdale, for example, was torpedoed in the North Atlantic during April 1941, with the loss of twenty one lives. 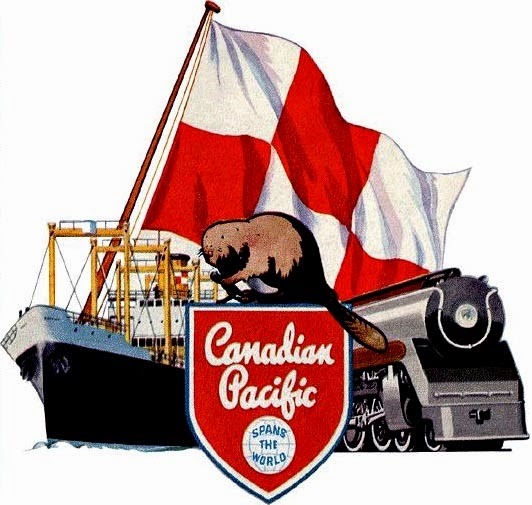 With thanks to Frank C. Bowen's 1938 London Ship Types
for a lot of the information in this post.

Visitor Ships 2: A snapshot of ships present in the Surrey Commercial Docks in the late 1950s
http://russiadock.blogspot.co.uk/2013/10/a-snapshot-of-ships-present-in.html