Downtown is the area along Rotherhithe Street that sits in the area behind Surrey Docks Farm.  Trinity Church, which was destroyed during the war and replaced by a 1950s version that stands today, was built to serve the Downtown area, and had its own school room attached for local children (I've written about Trinity Church on an earlier post).  Downtown was a village in its own right, just as Rotherhithe village to its west was. Stuart Rankin describes it as:


"formerly a self-contained community with its own church, chapels, schools, shops and pubs.  It was separated from the rest of the civil parish by the great sweep of the docks and the swing bridges giving access to them.  It was said in the 1890s that some elderly residents had never travelled as far as Lower Road."


Downtown and the area that we now know as Rotherhithe village were therefore two distinct entities in the Rotherhithe peninsula, connected to each other by Rotherhithe Street, but separated from each other by the docks and probably by the less definable sense of being two separate communities, particularly as their social infrastructure, with a church, school, pubs and other facilities became established and formed the centres of local activity.  People had no need to travel away from the community to find what they needed, and Downtown developed a personality of its own.

Downtown was downriver from both Rotherhithe village and London itself.  If it does not refer to its downriver location I don't know where the name Downtown would have come from, but I am sure that the fact that it was named at all derives from the idea that this was a community in its own right.  It seems likely, looking at the maps of the area, that the Downtown area's housing, consisting of terraces of small houses, was built to accommodate the infusion of dock workers and their families.

The 1868 map shows a small community sandwiched between Acorn Yard and the docks to the west and the Thames with its wharves to the west.  The river frontage included the massive Acorn Wharf timber yard (now Surrey Docks Farm and formerly one of the shipyards of the magnificent Barnard shipbuilding family),  the even bigger Durand's Wharf, Trinity Wharf, Queen's Wharf, the tiny Albion Wharf, a cooperage, another big timber yard, a number of saw mills and Nelson's Dockyard. All of these will eventually be covered in future posts - there's enough to keep me going for another decade!

Whereas today Rotherhithe village, much further along Rotherhithe Street, almost on the opposite side of the peninsula, has a clearly distinctive personality based around St Mary Rotherhithe church, Downtown was bombed fairly catastrophically during the war and retains little of its original architecture.

Trinity Church and its vicarage were destroyed by bombing on 7th September 1940, the first night of the 39-day London Blitz, a tragically memorable day for London.  At 5.30pm 348 German bombers dropped incendiary bombs on London.  A distribution map compiled from Fire Brigade records shows where and how densely the bombs fell on that day across London. Another map, on the Guardian website, shows where they fell in Rotherhithe. The bombs hit Rotherhithe so badly that the fires were uncontrollable and had to be left to burn themselves out, largely due to the intensity of the fires in the timber yards. The area was evacuated and much of the Downtown area of Rotherhithe was lost in the blaze.  Trinity Church was one of the first churches to be destroyed by German bombing.  All that now survives of its interior is a charred metal cross, with a figure of Jesus, returned to Holy Trinity in 2002. In the modern churchyard are some of the old churchyard's rather lovely tombstones, leaned up against the churchyard wall.  As a result of the war, the area has been radically developed since the 1930s, particularly during the 1990s. 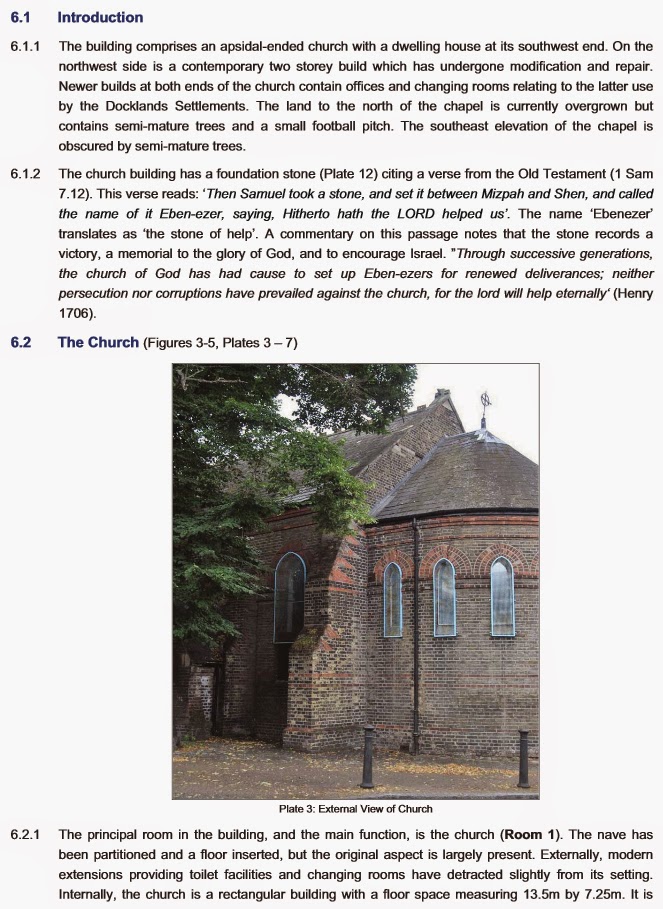 However, one or two local buildings survived the Blitz, including what became known as the Dockland Settlement, the fourth location for a charity started by a wealthy playwright called Reginald Kennedy Cox (http://www.docklandsettlements.org.uk/).  The Dockland Settlement incorporated what was clearly once a rather nice chapel, the Ebenezer Chapel (a Norwegian place of worship and seamen mission), together with a contemporary two storey house, which was also obviously once very attractive. The Ebenezer Chapel and the attached house were recorded by archaeologists of the AOC Archaeology Group before it was demolished, and that 33 page report can be found here on the Archaeology Data Service website.  It describes the chapel as follows:  "This was built in 1871 for the local Norwegian population. This building was recorded to Level 2 standard as defined by English Heritage Guidelines."  The photograph on this post is a screen-grab from that report, showing the Ebenezer Chapel, that stood at the site until recently.  There's a brief but good explanation of the background to the word Ebenezer (not a name, as I ignorantly thought, but from the Hebrew, meaning "stone of help") on the Missouri Conference website: http://www.moumethodist.org/news/detail/831.

The pastor's house was attached to the chapel.  This was a two storey building with a hipped slate roof that was probably contemporary with the chapel and certainly dated to the 1870s.   The Dockland settlement, complete with chapel and pastor's house, was demolished to make way for a new block of flats in 2013.