There are three buildings that make up the Hope Wharf enterprise:  one with a Thames frontage, and two others facing onto St Mary Rotherhithe Street, which changed function over time but were originally storage and stables.  There is a small cobbled corridor between the building that fronts onto the Thames and those that front onto St Mary Rotherhithe Street, and they are connected by a first floor gantry walkway (see the fourth image on this page), a common model for this particular part of Rotherhithe.  Grice's Granary, for example, had the same relationship between Thames-fronting wharf and a separate granary connected by a walkway.  The Hope Wharf buildings are in the heart of Rotherhithe Village, very near to the 18th Century church of St Mary Rotherhithe and its churchyard.

On the 1868 Ordnance Survey map to the right the riverside building is highlighted but behind it are the other two buildings that made up the complete property.  All three were in poor condition before they were restored, and it is thanks to the quality of their original build that are still standing.  The two overlooking St Mary Church Street are clearly painted with their names (see the photographs at the end of this post).  Apart from the church in its grounds and the large tree-framed burial ground, this is an area dominated by closely-packed buildings.  If you click on the map to enlarge it, you will see that the Thames frontage is an almost unbroken ribbon of wharves punctuated by waterman's stairs and open yards.  Set back of the Thames are granaries, timber yards, mills and, inevitably pubs (four in the immediate vicinity).  Beyond them are dense terraces of housing. The East London railway runs close by, with Rotherhithe Station clearly marked.  Hope Wharf was located in one of Rotherhithe's busiest commercial areas.  It was well set up for connections by river and rail, employed dozens of people, many of whom lived nearby, and it was well served by those fundamental opposites of community life:  a church and a lot of pubs.

The three buildings dates to the early 19th Century, probably around 1810.  They were all built of yellow London stock brick, a ubiquitous building material in Rotherhithe (see my post about London stock here).  The building that looks onto the Thames consists of three storeys with attics.  Key features are wooden storey-posts and a hipped queenpost roof with eaves at the front. Inside, at least one post was the reused part of a ship's mast.

I have been unable to find out what it was used for when it was built but by the 1850s Hope Wharf was occupied by Joseph Goddard, when it was used as an open coal wharf and depot.  He was there at least until 1858, when he is mentioned in the February 27th issue of the London Gazette.  By 1890 it was occupied by L. Farrel.  In 1902 it was taken over by H.F Gardiner and Company, who were wharfingers.  Wharfingers were general cargo handlers who provide docking facilities and are responsible for receiving cargo and storing it, and ensuring that it is forwarded correctly.

Between the 1920s and 1960s it was operated by A.J. Gardiner and Sons as a sufferance wharf for the handling of foodstuffs, flour and metals.   Sufferance wharves were buildings that were licensed to handle dutiable goods.  H.M. Customs regulations that were brought in during the 19th Century dictated that all dutiable goods were to be offloaded at special Legal Quays, all of which were on the north bank of the Upper Pool, a stretch of the river between London Bridge and the Tower of London.  The Legal Quays often reached and exceeded capacity, unable to cope with the cargo that they were required to handle.  Sufferance wharves were introduced to assist with the traffic jam - places that were permitted or "suffered" to land good that attracted lower duties. Five sufferance wharves were licensed on the north bank of the Thames and sixteen on the south.   The wall-mounted hoist or crane has been preserved today belongs to this period, shown in the photograph above in 1937, below in 1979, and at the end of this post as it is today.   It was made by the East Ferry Road Engineering Works in the 1930s on the Isle of Dogs and was capable of lifting 12.5cwt.  In the 1937 photograph above, the space to the left of the building (at the right of the photograph) is the yard into which much of the cargo was offloaded, and it too has a crane in it.  This yard has been preserved today and is a good place to see the wall-mounted hoist (and has great views of the river).

The building now known as the granary was used for storage during the sufferance wharf phase, and only later became a granary, serving the nearby Thames Tunnel Mills.

In 1974 part of the property was acquired by the Industrial Buildings Preservation Trust and was converted by Duffy Lange Giffone Worthington to premises for crafts workers, including silversmiths, potters and knitters.  It is worth noting that this was done over a decade before the regeneration of the area by the London Development Corporation.  There's a nice description of the conversion in the Time and Talents booklet mentioned above (page 7):


"The main structure was general sound but the floors had sagged alarmingly because of the heavy loadings they had to bear.  The top of the parapet was rebuilt and a new roof constructed with dormer windows lighting a third floor display area.  Glazed doors opened onto patio giving fine views across the Thames; a small opens paces was created along the river side of the building, with benches and brick planters; and the warehouse hoists were restored and pointed as a reminder of its past.  The scheme took a year to complete and cost £160,000.  The first occupants were craftsmen: potters, silversmiths, glassblowers, ceramicists and carvers."


The journalist who started today's invaluable local newspaper, Southwark News (Bermondsey News in its first iteration), was at that time running a news agency and had a small office there.  It's rather a nice story (from the Southwark News website - see the page for full story):

"The Southwark News, London’s only paid for, independent weekly newspaper, was born in 1987 – the brainchild of respected journalist Dave Clark.  At the time, Dave had left behind a successful career in national newspapers and was running his own news agency, South East News, out of a rundown warehouse in Hope Sufferance Wharf, Rotherhithe . . . .  Seeing the need for a local community paper in the Bermondsey and Rotherhithe area, Dave decided to launch an A4 photocopied sheet of paper, and sell it for 20p, hand delivering it to a few newsagents.


Hope Wharf was transferred into the hands of Southwark Council in 1977 and closed a few years later in a "rundown" condition, according to the Southwark News excerpt above.  It's really rather sad that this particular brave experiment failed.

In 1997 the properties that made up Hope Wharf were converted to apartments. There is a small garden immediately to the west of the Thames frontage, on the site of Wilson's Yard, from where the side of the building can be seen, together with its hoist. The current state of the buildings can be seen below.

The buildings are Grade II listed. 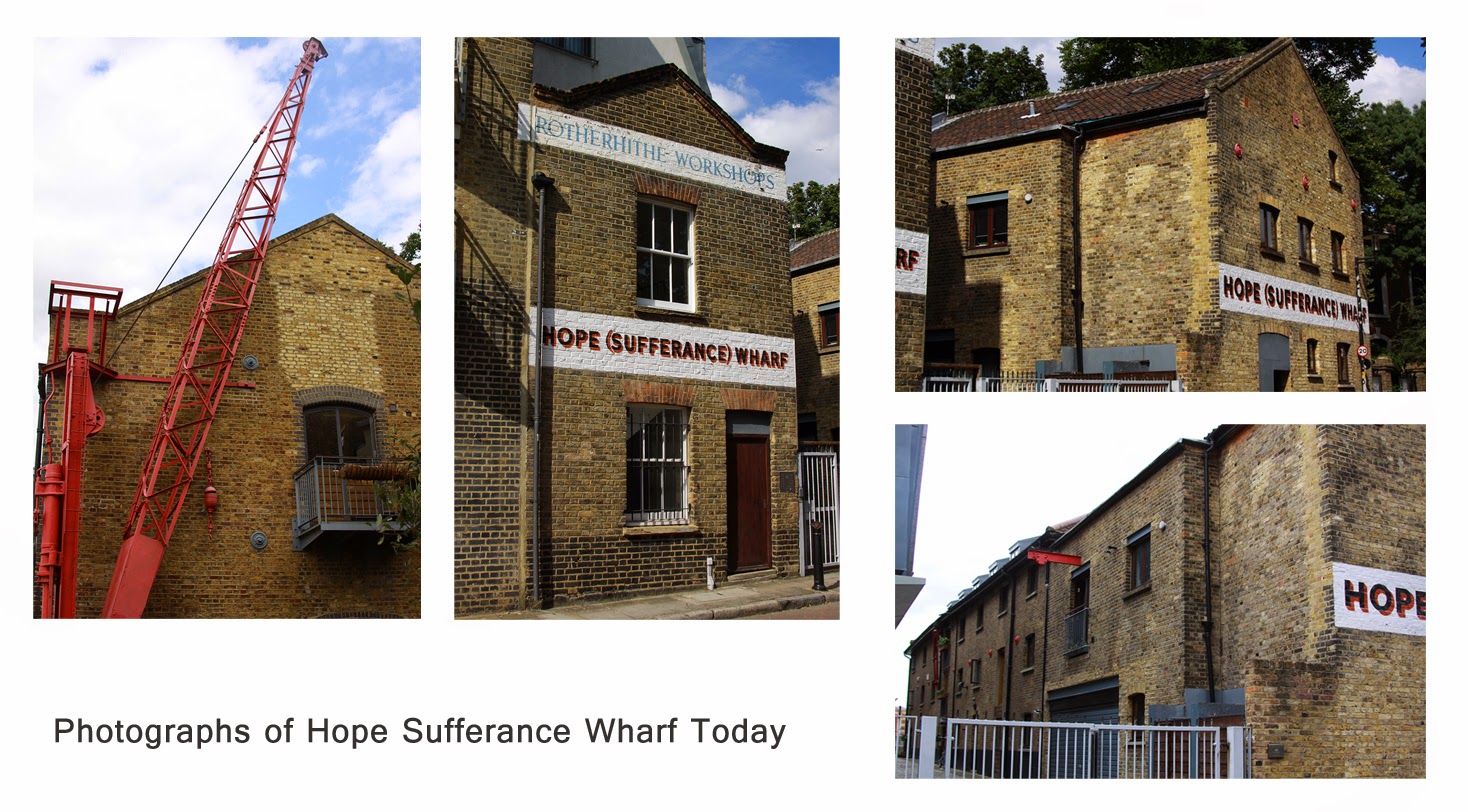 With thanks to "London's Changing Riverscape" for the names and dates of the occupiers up to the 1960s.
Posted by Andie at 08:57