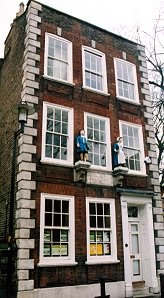 At number 70 St Marychurch Street, the former Peter Hills School in Rotherhithe village is one of the few 18th Century buildings left standing in Rotherhithe, and is therefore of particular importance to the area's heritage.  Now converted for use as offices, it was established in 1742 as a charity school, having moved here from nearby.  The school itself was established in 1614.

The school was founded by its benefactors Peter Hills and Robert Bell.  Peter Hills, a seafarer, Master Mariner and Brother of Trinity House.  When he died in 1614, he left a sum of money to enable the establishment and ongoing maintenance of a school.  Robert Bell is a more mysterious figure, although he was a friend of the St Mary's Rector, Thomas Gataker, who was undoubtedly a supporter of the project.

The school was established initially to supply education for 8 sons of impoverished seamen.  Reverend Beck, writing in 1907, describes it as follows: "The schoolmaster had a house of residence and a small yearly endowment that he might in it teach eight boys, sons of Mariners of Redriff.  The sum left by Peter Hills was small, Six pounds per annum, secured as a Rent-charge upon Messuages belonging to him.  One moiety of this sum was to be paid to the Schoolmaster, the other moiety to the Churchwardens for the Poor."  The arrangement continued for a remarkable 280 years until 1900 when the parish and the school were incorporated into the Metropolitan Borough of Bermondsey, who refused to continue with the arrangement.  The school was located in a building at the east end of the church.  In its first incarnation it was known as the Free School.

In the early 1700s the initial investment in the school was no longer sufficient and additional funds were raised which allowed the school to be hugely expanded, providing education for 65 boys and 50 girls.  An amicable fund set up in 1739 supplied funding to provide for an additional 12 boys.  In 1742 it became known as the Charity School.

A board survives in St Mary's Rotherhithe that records those who donated money to the school to keep it running when finances ran low, and this way of funding the church was maintained until the early 20th Century.

Following the demolition of the building in 1795 a house was purchased by the vestry from one Richard Vidlar to replace it. This is the building shown on this page, and dates to the early 1700s.  The newly housed school opened in 1797.  The two lovely figures of the schoolchildren that decorate the first floor are made of Portland Stone.  Thankfully, the building is Grade II listed, and been since 1949.  It is described as follows by English Heritage as follows:

In 1836 the girls moved out of the building and were educated instead at the new St Mary's School in Lower Road.  An extension of the Peter Hills building in the property's garden enabled up to 150 boys to be educated there by the late 1800s.  By 1901, the Reverend Beck was able to write that "this admirable institution survives to the present day, being incorporated with later foundations of a like character, and it is now a flourishing school of 200 boys doing a most valuable work for the rising generation of our parish."

As other schools became established in the 19th century, many affiliated with local churches, the Peter Hills school became amalgamated into the larger network of education in Rotherhithe.

Apparently the building was used by the fire service in the Second World War.  It became part of St Mary's Rectory in the 1970s and was later converted for use as offices.  The Peter Hills name lives on in local education in the form of the modern Peter Hills with St Mary's and St Paul's C of E Primary School, which can be found at 2 Beatson Walk.

Peter Hills died on 26th February 1614, a century before the new St Mary's was built in 1714-15.  Fortunately, some of the memorials were taken from the old church and installed in the new one, and the Reverend Beck, writing in 1907, tells how the three portions of a monumental brass dedicated to Peter Hills and embedded into the floor of the old church were taken into the new church and, because they were so badly eroded, were mounted on wood and hung on the wall.  The brass includes a portrait of Peter Hills and both wives and the inscription reads:

Here lies buried the body of Peter Hill, Mariner, one of the eldest Brothers and Assistants of the Company of the Trinity, and his two wives; who while hee lived in this place, gave liberally to the poore, and spent bountifully in his house;  and after many great troubles, being of the age of 80 yeeres and upward departed this life without issue, upon the 26 February, 1614.

This was made at the charge of Robert Bell.


Though Hills be dead,
Hills' Will and Act survives
His Free-Schoole, and
his Pension for the Poore;
Thought on by him,
Performed by his Heire,
For eight poore Sea-mens
Children, and no more


Photographs of the Peter Hills brass and the subscription board mentioned above can be see on the St Mary's Rotherhithe website at http://www.stmaryrotherhithe.org/index.php?option=com_content&view=article&id=3&Itemid=4.

I lived in this house from about 1968 to 1973. Even then there were remnants from its school days in the cellar; tiny chairs, huge ledgers and the school bell that was used to summon us from the top of the house for meals. We loved the space. I can't imagine 200 boys in there.

Great to hear some personal memories of the building - thank you very much for sharing.

I am writing a history of an ancestor of mine whom, I believe, may have gone to this school. Are there any records of the pupils that from around 1830? Graham Rogers

No sorry. I have no idea if there are records of the school from the 1830s. You might try talking to St Mary's Rotherhithe church - they may have an idea where you could search.

Thanks Andy, I'll try that.