Visitor Ships 2: A snapshot of ships present in Greenland Dock in the late 1950s

Footage of the London docks filmed by Lewis Coles in the late 1950s has been incorporated into a DVD called London's Lost Docks (about which I posted a short review). Coles worked for Kodak, and was a very skilled camera man. His film included a short piece that he shot in the Surrey Commercial Docks.  Most of the ship names were difficult to make out, but the footage that he shot in Greenland Dock was clear enough to make out the name of a variety of large international commercial ships and smaller local working vessels.  I thought that it would be interesting to find out a little bit more about the ships that were filmed that day to provide something of a snapshot of dockland activity in the late 50s, around a decade before the docks closed for good.

None of these ships were glamorous.  All were workhorses.  But they all make up part of the story of international maritime commerce in the 1950s, just as the Port of London was coming to a close, and each has a very particular dignity of its own.

California Star was a steam ship built in October 1945 by Harland and Wolff in Belfast as a refrigerated cargo liner for the British Ministry of War, towards the end of the Second World War. She was launched with the name Empire Clarendon.  She was 457ft long, 30ft deep with a 63ft beam, two masts, a single screw and a GRT of 8577. She was powered by two 8-cylinder S.C.D.A. Burmeister & Wain oil engines and had accommodation for 35 passengers. She was operated for the Ministry of War by P and O. Steam Navigation Co. Ltd.  In November 1946 she was purchased by  Frederick Leyland and Co. Ltd. for use by the Blue Star Line.   In 1947 she was renamed Tuscan Star and in 1948  Timaru Star, when her passenger carrying capacity was reduced to 12.  She was sold again in 1949 to Lamport and Holt Line Ltd., Liverpool. When she started serving on the North American Pacific coast route in 1958 she was renamed California Star (2) and in 1959 she was purchased by the Blue Star Line.  In 1967 she was transferred to the New Zealand service as a fish factory ship, but in 1969 she was sold to the Tsuan Yau Steel & Iron Works Co. Ltd., for scrap.  There are a number of photographs of her on the Blue Star line website. 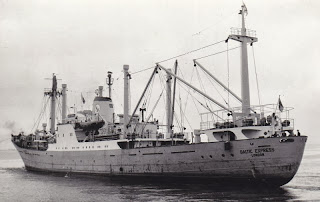 Baltic Express was owned by the United Baltic Corp. at the time she was filmed by Coles.  United Baltic was founded in 1919 by a partnership of Andrew Weir and co and the Danish East Asiatic Company to operate mainly between London and the Baltic, carrying both passengers and cargo.  Service was suspended during the Second World War, and afterwards the political situation meant that only services to Finland and Poland were resumed.  The last of her passenger ships was sold in 1947 and her remaining cargo ships provided only very limited passenger accommodation.  In 1982 Andrew Weir and Co. bought out the East Asiatic Company to become the sole owners.

Baltic Express was built by Ottensener Eisenwerk of Hamburg in 1957.  Her usual run was between London and Helksinki, and her main cargo was timber, which accounts for her presence at the Surrey Commercial Docks, where timber handling was the main purpose of many of the wharves.  Her sister ship Baltic Importer was based at the Surrey Commercial Docks.  It is more than likely that both ships were importing timber into the docks. In 1972 she was sold to Marastro Armadora S.A. and was renamed Moska.   In 1980 she was renamed  Seawind.  In 1984 she was broken up in Bombay.

There's a sad story about her on the Ships Nostalgia site, written by one of the crew, Alec, who served on her, which highlights some of the risks associated with the life: "They were all good jobs, except for the "Express". We lived aft (AB's) and not very good accommodation. Food was good and we had a good deck crowd, Bosun, Chippy etc.. and a good run. I loved all the ports in Finland even though we were there in the winter (not very nice if you were on deck). The sad part of my time on there was when we lost the Mate and Chippy. They were washed off the foc'sle head down to the forepart of the bridge and died of their injuries. We were on the way from Finland to Methil and this incident happened halfway across the North Sea.  Yankee helicopters came out to us but it was too late for the mate who died in our arms(we were hanging on to them to keep them comfortable as the ship was rolling like a bastard, we had them in the accommodation by this time) The chippy was taken off in the helicopter but died on the way to Aberdeen hospital . . . . After this incident I couldn't sail in her again even though I did do one more trip, no fault of the ship, but there was something about her that I couldn't handle. I paid off in Millwall Dock, London and a week later joined the "Blenheim" (Fred Olsen line) in the same dock just before Christmas."

Sadly, I was unable to find out any further details about her.  There were several ships named Pallas, and distinguishing one from another was impossible using the resources that I have to hand.

Gallion's Reach was built in 1936 at Leith Shipyards in Scotland.  She started out life as a steam hopper but was converted first to a salvage vessel and then, after the Second World War, to a steam-powered grab dredger for use on the Thames, operated by the Tilbury Contracting and Dredging Company.  She was 178ft long with a 34ft beam (796 GRT).

A detailed history is available on the Leith Shipyards website but here are some of the key landmarks in her history.   Built on the eve of war, she was used during the Second World War as a salvage vessel and was one of the ships that went to Dunkirk (the above site has a marvellous photograph of the letter of thanks sent to the crew of Gallion's Reach for her part in Dunkirk).   After the war she was laid up in Norway Dock before being sent to Hull for conversion to a dredger with three cranes, whereupon she returned to the Surrey Commercial Docks, whens he was owned by the Port of London Authority.  There seems to be some doubt about her ultimate fate.

The Sun tugs, with their distinctive red, white and black funnels, were ubiquitous in the Coles film, as well as in other footage on the London's Lost Docks DVD.   Tugs were used to pilot large ships down the Thames, into and through the often chaotic docks.  They often worked in tandem, with one at the stern and one at the bow, and were often required not push smaller vessels out of their path within the docks.

The Sun vessels were known, collectively, as the Sun tugs because each was named Sun followed by a Roman numeral (Sun II, Sun III etc).  The company that operated them was W.H.J. Alexander Ltd, which operated out of Wapping as a lighterage company from 1883. The company began using the Sun prefix on their tug boats from 1899 onwards.  It was a fairly considerable family enterprise, and sons of William Alexander took tugs to Dunkirk during the Second World War.  The company was eventually amalgamated with another company to become London Tugs Ltd and was dissolved in 1978.  There's a short description of the company and its tugs, with a lot of good photographs, on the Thamestugs.co.uk website.

One of the tugs that took the trip to Dunkirk, Sun VII was lost during that war.  She was built in 1917 by Rennie Forrest Ltd., Wivenhoe, for W.H.J. Alexander.  Her dimensions 105.2ft long by 25.5ft beam with a depth of 12.2ft and 202grt.  In 1917, during the First World War she was transferred to the Admiralty and was returned to her then owners in 1919. She was transferred back to W.H.J. Alexander Ltd in 1929.  She was once again requisitioned by the Admiralty  during 1939 and in 1940 went to Dunkirk towing five tenders. In 1941 she was destroyed by mines in Thames Estuary with the loss of five crew members (information from the Thamestugs.co.uk website).

Remarkably, the tiny 1949 tug Velox has survived.  She was built by Richard Dunston for Clements Knowling Ltd and in the 1950s was operated by the Port of London Authority.  Since then she has passed through numerous hands, and is now privately owned and no longer operates on the Thames.  She is a small tug 41.3ft by 12.1 ft beam with a depth of 5.0ft and 20GRT.  Her job was to move barges and smaller boats and dredgers, supplementing the work done by the large tugs that focused on safe piloting of ships.