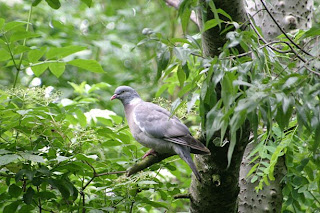 Needless to say, there is not a day of the week or a time of the year when you don't see pigeons in the park.

The humble pigeon turns out to be two different entities in the UK - the feral pigeon (below) and the woodpigeon (left). Thanks to Mike Scott, who would be a much better candidate for running this blog, for putting me straight.

The whole pigeon family was put firmly in its place a few weeks ago by nine year old Charley who asked very disaprovingly why I was taking a photo of something as boring as a pigeon. The bird under discussion was actually a fine specimen, all his coloured plummage thrust to the fore to attract a somewhat doubtful female. But Charley's attitude captured our general approach to pigeons. At best they are big and ungainly, somewhat boring to observe, and at worst they are the opportunistic greedy scavengers of bird tables. Their droppings blemish and even cause the erosion of buildings and monuments, and in rural areas they are very destructive to cereal crops, root crops and and peas. There's an interesting article on the BBC News website which address the question Why do we hate pigeons so much? - it has inspired quite a few comments on the page in response. They are legally categorized as pests and as such can be destroyed by landowners.

But the pigeon was no always seen as such a disruptive force.

The rock dove is the ancestor of the feral pigeon (but not the woodpigeon). As its name suggests it favours rocky landscapes and cliff faces. It still survives in Scotland where it lives wild on coastal rock faces. The affinity of the pigeon for buildings is probably explained by that ancestry. Pigeons don't actually need green vegetation - they can survive quite happily on bread, meat, seeds, and berries.

The feral pigeon had a more central role in history, when its benefits overcame its disadvantages. Not only has it been an important foodstuff for many countries through time, but its astonishing homing instincts gave it an important role as a messenger and contributed to the world of sport as a racing bird. 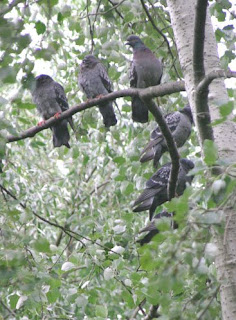 The pigeon has been used as part of the daily diet in many countries. I was only posting about pigeons and dovecotes on my Egyptology News blog the other day because have always been of great importance in Egypt, where they have been kept in pigeon houses which are a feature of the architectural landscape. Examples are known dating back thousands of years, and that post shows a pigeon house in Karanis, in the Faiyum Depression, which dates to the Roman period. I

In England the rock dove was domesticated so that their young, called squabs, could be taken for food. Not only were their wings clipped but their legs were broken to prevent movement. Medieveal homes usually had dovecotes which supplied their owners with young pigeons, particularly during the winter months when other species were in short supply, but they declined in popularity when other species became more reliably available over the winter. Pigeons returned to the wild, effectively becoming feral. Today in the UK they are still served as game.

The ancestors of the rock pigeon that survived the change in eating habits were the messengers and the racers. In both roles, it is the bird's homing instinct which makes it so valuable. The value of the pigeon as a messenger was recognized in Mediaevil times. There's a good summary of homing pigeons on Wikipedia. They were used for carrying messages during both the First and Second World Wars by the British Army. In 1944 a bird named Winkie was honoured with a medal for carrying a message from a fighter plane that had ditched in the North Sea back to headquarters.

Pigeon racing has declined over the years, but it used to be very popular. It was apparently developed in Belgium in the Nineteenth Century. The patron for the Royal Pigeon Racing Association is the Queen. Again, there's a survey of the sport on Wikipedia. A fascinating article on the subject is Pigeon Racing and Working Class Culture in Britain c.1870-1950 by Martin Johnes

Physiologically they have the unusual feature of making a type of milk with which to feed their young for the first two weeks of life, which they make within the crop which usually stores food. The fluid is generated by the processing of edible rubbish and is rich in fat and protein. They share this rare skill with emperor penguins and a member of the flamingo family.

I was impressed recently by a BBC News 24 report about a Gateshead school which uses a set of its own racing pigeons in order to help teach children mathematics and other subjects. There's a video report of the school's project on the above page on the BBC News website.

A truly fascinating look at the origins of the modern feral pigeon is The Feral Pigeon, by Prof. Dr. Daniel Haag-Wackernagel from the Research Group Integrative Biology at the of , . Other papers on pigeons by the same author can be found on the Professor's home page.

Finally, does anyone remember that fabulous song "Poisoning Pigeons in the Park" by Tom Lehrer? An old family favourite. 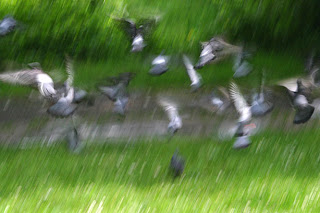 Actually, the rock dove (columba livia) is the ancestor of the feral pigeon, not the woodpigeon (columba palumbus). We have both species in RDW (and, indeed, in your photos on this post -- the first one is a woodpigeon and the second is a group of feral pigeons).

I KNEW that this blog was going to be hard work!! Learning from books only takes you so far. I'll do the corrections when I'm feeling stronger - thanks as usual.

I'm afraid you've still got the woodpigeon and feral pigeon reversed in your descriptions of the photos. The easiest way to tell them apart is the big white flash on the back of the neck of the woodpigeon (although juveniles don't have it).

I should clearly stick to archaeology and software. Never mind, nothing ventured, nothing learned.