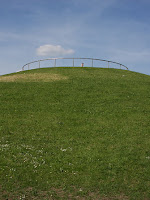 I've been piecing together the local history surrounding the Russia Dock Woodland and Stave Hill Ecology Park recently, and it has been interesting to locate the extant remains of the former network of docks and timber ponds, of which more on future posts. I used to have an O/S map of the Surrey Commercial Docks which I have now mislaid, but various books have been published about the dockland background, and these have been more than sufficient to find the seams between past and present. One of my favourite maps of all is the three-dimensional version of it - the bas-relief sculpture on top of Stave Hill. I though that I would mention it in case people visiting it wonder what it is all about.

Stave Hill itself is formed of rubble left over from the tidying of the docks, which were filled in in 1984,. It was designed as a viewing area, it is has lovely views over a massive distance, with landmarks like Canary Wharf just over the Thames and, further off, Tower Bridge, St Paul's Cathedral and the London Eye clearly visible.

The sculpture itself was created by Michael Rizzello O.B.E. in 1989, and was commissioned by the London Dockland Development Corporation. A bas-relief, it is made of bronze and is mounted on a granite base. It shows the Surrey Commercial Docks as they were in 1896. One of the charms of the map is that when there has been rainfall each of the docks and channels fills with rainfall. If you know where Greenland Dock and South Dock are located in the real world it becomes quite easy to use the Stave Hill map to locate where other docks and ponds would have been. I can lose track of time looking at it because the detail is so fascinating. Each of the docks is clearly labeled.

Michael Rizzello (1926-2004) created sculptures (particularly portraits), reliefs, coins and medals for both private and public purchasers. Many of his portrait subjects are well known public figures. He was awarded the Prix de Rome for Sculpture and served two 5-year period terms s as President of the Royal Society of British Sculptors. He was awarded his OBE in 1977. For someone so highly rated by the art world his work is very little known by the general public. If you are interested in finding out more, there is a website dedicated to a retrospective of his life's work. 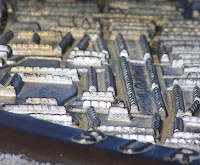 Rizzello also sculpted the bust of James Walker, which stands overlooking Greenland Dock, near the Moby Dick public house. I'll be talking about that sculpture and James Walker later.
Posted by Andie at 08:11