An American invasion of England 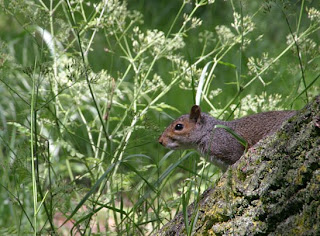 I've mentioned the grey squirrels that inhabit the RDW in previous posts. I've seen so many of them in the RDW that I thought that I would provide a more detailed summary of the grey squirrel than I gave in my previous offering on the subject.

A friend of mine refers to them as rats with tails, but they have supporters because of their endearing features, the bushy tail and their gymnastic abilities. They are often audacious, quite tame and can be very entertaining to watch.

Their detractors consider them to be vermin, with good reason. They steal bird eggs and eat baby birds, dig up and eat spring and summer bulbs and new shoots, and they chew through tree bark, leaving the tree vulnerable to disease. They also carry squirrelpox (to which they are themselves immune, but to which red squirrels are vulnerable), and they replaced the far less destructive red squirrel, which is now confined to more marginal areas.

The American grey squirrel was brought to England deliberately in 1876 by a Cheshire landowner. It was hunted and eaten in the U.S. and was probably introduced into England for that purpose (they are still eaten in the US). There were so many in Woburn Abbey's grounds that betweeen 1905 and 1907 they were released into Regent's Park, from where they spread to London's green areas. Their apparent impact on the red squirrel and the damage to trees, bulbs and new shoots was very unwelcome and between 1917 and 1937 four thousand grey squirrels were shot in Kew Gardens alone. By the 1930s it was already considered to be a pest and had spread over a big distance. Between 1945 and 1955 a reward of a shilling a tail was paid in some rural areas and squirrel shooting clubs began to grow in number. 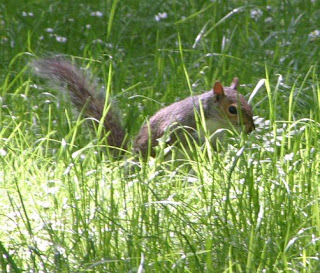 By the 1940s the grey squirrel had completely replaced the red in most areas. The Guardian quotes a 1995 report which says that red squirrel populations in the (1995) revealed that there were 161,000 in the , with 121,000 in ; 30,000 in and 10,000 in . Things have changed since then, the grey squirrel is more efficient on British soil, better at finding food supplies and carries a deadly disease (called squirrelpox virus) that it is immune to, but kills red squirrels. It is estimated that grey squirrels outnumber reds by more than 60 to one in . But there are still red squirrel strongholds on islands (Isle of Wight, Brownsea in , Anglesey) and in the north of and .

Although there are a number of well-aired urban myths on how this replacement took place (which typically takes between 15 and 20 years), academic research projects have actually failed to identify the process by which the red squirrel is ousted in favour of the grey. There is one theory that they abandoned the struggle mainly because the areas in which grey squirrels survive is not their favoured habitat anyway. Whilst grey squirrels prefer deciduous parkland, the red squirrels are far better adapted to confierous woodland. It is thought that the above-mentioned virus may have contributed significantly the demise of hte red squrrel. It could be that it was it was not one circumstance but a number of different ones that saw the retreat of the red squirrel and the diminishment of their numbers in favour of the American interloper.

Perhaps (just a joke) we should take the advice of the Guardian newspaper's Caroline Davies who suggests that we emulate the Americans and eat them into controllable numbers: "It tastes sweet, like a cross between lamb and duck. And it's selling as fast as butchers can get it. It's low in fat, low in food miles and completely free range. In fact, some claim that Sciurus carolinensis - the grey squirrel - is about as ethical a dish as it is possible to serve on a dinner plate." Or perhaps not! (See the article on The Guardian's website for the full story).

I opened the door of my house to a delivery man a few days ago, and there was a grey squirrel in Russell Place trying to get into the front door of the Moby Dick. Somehow, I don' think that he would have received much of a reception if he had succeeded in gaining access.

The Forestry Commission have advice on how to control grey squirrel damage to woodland on their website (in PDF format).

If you want to know more about the red squirrels then the Friends of the Anglesey Red Squirrels website is a good place to start.

Finally, there are grey squirrel support sites too, including squirrels.info. 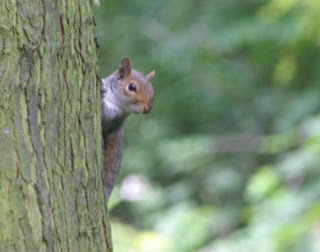