In 1719 a pub on the site was called the "Cock and Pye Ale House."  It later became the "Marsh Gate" and records show that in 1776 it was leased to Jonathan Oldfield, at which time it was called the "Green Man."  Oldfield was a trader, dealing in tea and china, a classic example of a late 18th century entrepreneur.  He built a theatre on land next to the pub, a wooden building that could hold 500 people and staged plays and hosted musical concerts; this was named the China Hall.  The prices for seats were 3s for boxes, 3s for the pits and 1s for the gallery.

During 1778 George Frederick Cooke 1756-1812) acted there.  Cooke was a famous and influential actor, whose acting style had a great impact on the more famous Edmund Keane, but at the same time he was an alcoholic and notoriously unreliable.  His last role had been at Covent Garden, but his behaviour disrupted his career:  "He now frequently appeared behind the scenes in a state of complete inebriation, or rather insensibility, in despite of all his friends could say to dissuade him from it.  He was accordingly laid upon the shelf for the remainder of the season" (from Roach's New and Complete History of the Stage, 1796).  He sought work at smaller theatres, including the China Hall, which was a success, his name attracting good audiences.  He was probably a good match for the China Hall, which itself apparently caused some disruption and was the subject of several complaints due to the noise and the undignified behaviour of its customers. 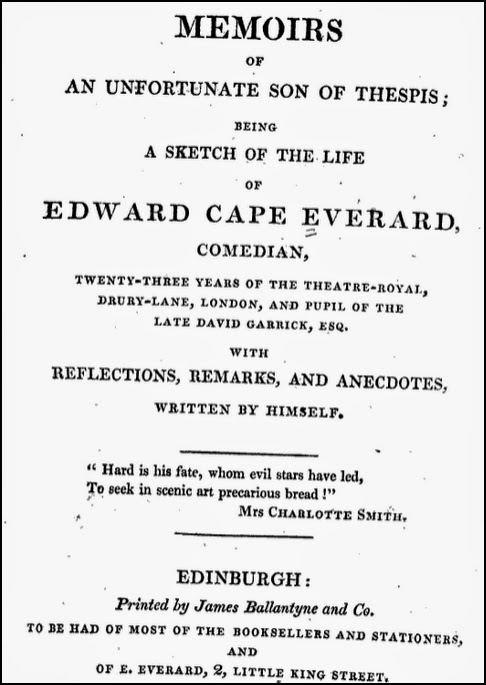 Another actor, who also performed at the China Hall in the 1778 season and was in several performances with Cooke, was Edward Cape Everard, a dancer, actor and musician, whose autobiography Memoirs of an Unfortunate Son of Thespis was published in 1818.  According to the book Eagan to Garrett: Actresses, Musicians, Dancers, Managers, and Other Stage Personnel in London, 1660-1800 (Highfill, Burnim and Langhans 1991), Everard performed in numerous plays at the China Hall including The Devil to Pay, The Busy Body, The Clandestine Marriage, Romeo and Juliet, Venice Preserv'd, High Life Below Stairs, The Earl of Essex, The Fashionable Lover, Cross Purposes, The Irish Widow and The London Merchant.  Other plays that were performed there, according to Edward Walford, were The Wonder, Love in a Village, Comical Courtship, and The Lying Valet.

The theatre burned down on 26th June in 1778 or 1779 (the various sources are in dispute) but according to Everard, a temporary wooden structure was erected in the gardens  in which The Merchant of Venice was performed only four days later on 30th June.  The temporary theatre, apparently little more than a large shed, remained in place for at least six weeks.  Oldfield was not deterred and re-opened again, but the new building was destroyed in a storm, after which Oldfied threw in the theatrical towel.  However, the China Hall re-opened in 1787 as a tavern.   Writing in 1872, Edward Walford  says that it had been "a picturesque building partly surrounded by an external gallery." 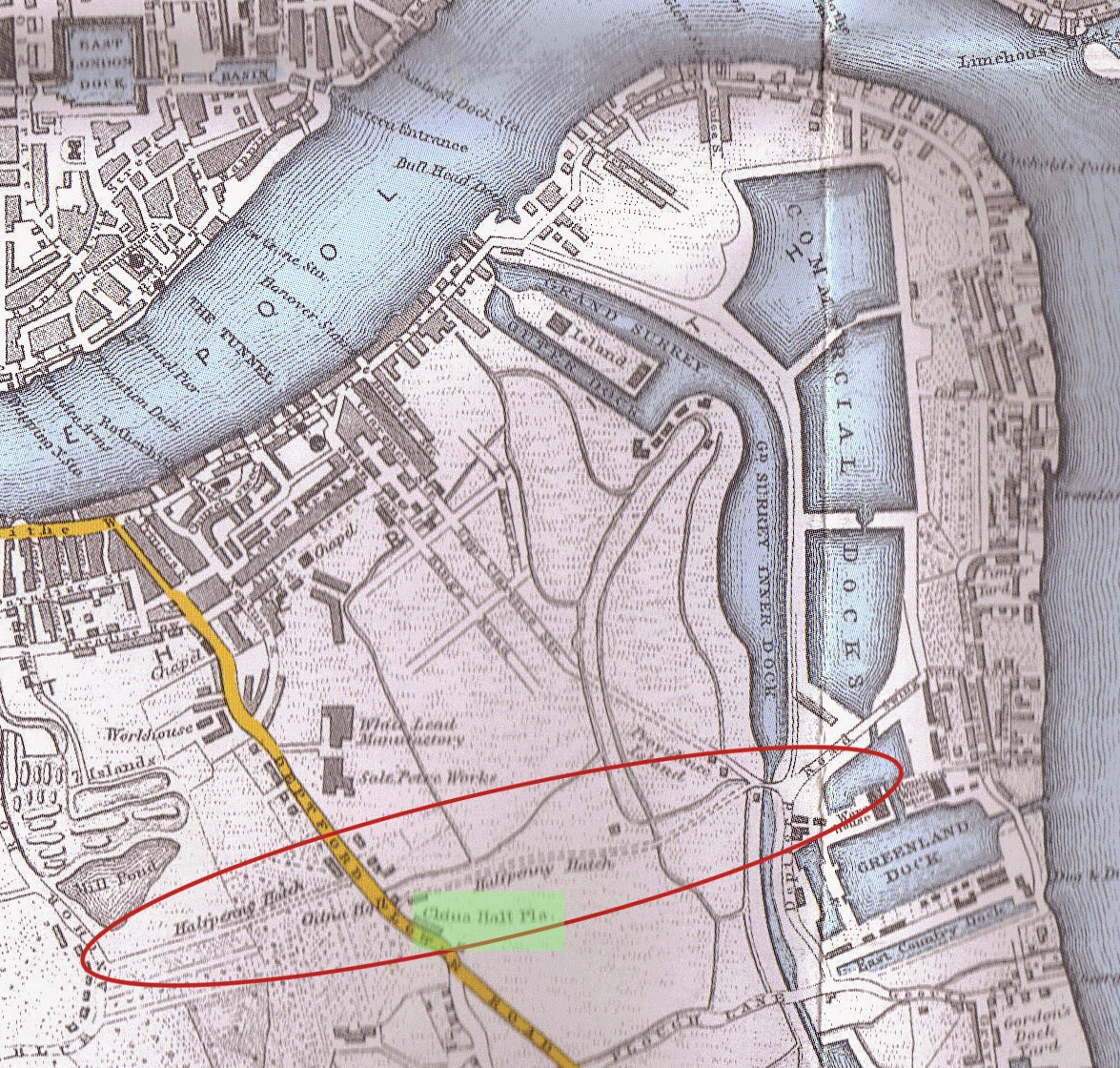 The China Hall faced land that was occupied by market gardens (today Southwark Park).  Across the park a that was called the Halfpenny Hatch (not to be confused with the Deptford path of the same name) led to the pub, starting in blue Anchor Road crossing Lower Road and, according to some accounts, extending to the Dog and Duck tavern, which was located near to the entrance of the docks.  The pathway was subject to a toll payment, but anyone drinking at the pub was refunded the toll fee.  Both the China Hall and Halfpenny Hatch path are still visible on the 1843 B.R. Davies map (picked out in green and red respectively).   Here, the Halfpenny Hatch extends to the Grand Surrey Canal at the bottom end of the Commercial Dock Company's land, leading into Deptford Road (now Salter Road).

The China Hall obviously suffered some other terminal indignity and for reasons unknown was rebuilt in the 1860s, albeit with the same sign that had adorned the previous building.

The site of the theatre became a well known tea-gardens, with the during the Victorian period.  By the mid 1800s China Hall Road has been established, which later became Rotherhithe New Road.

A photograph of the pub in 1916 (at the top of this page) shows a brick-built building with a wide ground floor frontage with wide windows divided by pilasters. The first floor has four tall, slender arched windows. It was an end of terrace building, and to its left it was connected to other buildings looking out onto a narrow pavement and the street beyond, including a hairdresser and what appears to be a tiny newsagent advertising "ices."  The hairdresser, to the left of the China Hall, has the same style of windows and was probably built at around the same time, although it is shorter and narrower.

By 1920s the tea gardens that had originally belonged to the China Hall were absorbed into the Surrey Commercial Docks as part of a timber yard.  Tea gardens were a popular feature of late 19th and early 20th Century Bermondsey and Rotherhithe, but like the more famous Bermondsey Cherry Gardens, they all fell out of fashion.

Although the 1916 photograph clearly shows the China Hall as an end-of-terrace unpainted brick-built building, today the brick has been painted and is now invisible and the building, with an extension to the rear, is detached from its neighbours.   There used to be a road along the side of the pub, once known as Providence Row, shown in the photograph below as the stump where two cars are parked.  Just to the right of the picture is a narrow passage called China Hall Mews.  Providence Row is still shown on the 1868 and 1914 Ordnance Survey maps, terminated by a railway cutting, a siding of the East London Railway that ran along the end of the docks and under the Thames via the Thames Tunnel.

Wonderful article. Thank you for your efforts in researching and sharing.

Thank you Freddie - very glad you liked it.

I have just read your blog on The China Hall .I am researching my family tree, mostly Rotherhithe and Deptford 3 family's .Will be visiting the area in the next fortnight and will take a look .Would love to think Great and Great Great Grandads drank in there .