The Commercial Dock Company: A history of Norway Dock and the timber ponds 1811 - 2014

Norway Dock is one of the few remaining areas of dockland water in Rotherhithe.  The others are neighbouring Greenland and South Docks and, over the other side of the the peninsula, Surrey Basin (now known as Surrey Water).   When Greenland Dock was purchased in 1807 by the newly formed Commercial Dock Company there were no other enclosed docks in Rotherhithe.

Norway Dock was the first of the docks to be constructed by the Commercial Dock Company to extend its capacity for handling timber.  Its principal source of timber was the Baltic, a trade that continued to flourish throughout the early 20th Century.  It was completed in 1811, and at that time was referred to simply as "No.2" dock (Greenland Dock being now being referred to as "No.1" instead of Greenland).  It was not until the 1860s that the docks were once again given more memorable names and the name Greenland Dock was restored and the title Norway Dock employed.

Norway Dock was contemporary with rival enterprises in Rotherhithe including the Grand Surrey Canal docks and the new East Country Dock (which was later extended and became South Dock).  Together these early extensions marked the beginning of the transformation of Rotherhithe from a rural backwater to a hotbed of  commercial activity.

When it was complete, Norway dock was connected to Greenland Dock, with no independent access to the Thames.  All vessels using Norway Dock would first enter Greenland Dock and then enter through Norway Cut, the connection passage between the two.

Its function was a reflection of the changing times.  Greenland Dock had been established in 1699 as a safe haven and repair station for ships returning to the Thames after their travels.  It later became a whaling dock.  But the purchase of Greenland Dock by the Commercial Dock Company, its construction of Norway Dock, the establishment of the East Country Dock Company and the construction of their own dock, all over the same period, were all about the Baltic and Canadian timber trade. The timber trade was exploding in the early 19th Century, supplying the building trade and other industries.  By the 1870s the Surrey Commercial Docks were handling and storing over 80% of the Port of London's timber imports, both hardwoods and softwoods.

As the requirement for more facilities for timber handling expanded, so did the docks.  In late 1811 No.3 pond was built, directly to the north of Norway Dock and later named Lady Dock.  Its purpose was to float timber.  The floating of timber, as shown in the photograph to the right, was a form of storage.  The timber, already cut into shape, was organized into rafts, which was moved by skilled rafters and could be maneuvered in that form out onto the Thames.  Timber could also be stored in enclosed or open-sided sheds, with which most of the docks and some of the ponds were provided.

A succession of other timber ponds were added on, each connected to its predecessor by  a cut - No.4 in 1812 (which later became Acorn Pond), No. 5  by 1827 (later Lavender Pond) and finally and much later, the small No. 6 pond by the 1861 (Globe Pond).  The building of Lady Dock had to accommodate Commercial Dock Road (now Redriff Road), which passed over the cut between Norway Dock and Lady Dock.  The other cuts were crossed by foot bridges.  By 1932 Acorn and Lavender Ponds had been deepened to serve as docks and were provided with timber sheds.  The map at the end of this post, which dates to 1876, shows how they all fitted together.

In 1850 the Commercial Dock Company bought the East Country Dock, made major changes to it, and re-opened it in 1855, eventually renaming it South Dock.  At this time it was connected to Greenland Dock, making it a part of the linear network of docks owned by the Commercial Dock Company. Lavender Pond was provided with a lock and a lift bridge to connect it to Russia Dock and the Grand Surrey Canal.

In 1860 Lavender Pond was provided with its own lock entrance out onto the Thames.  Lavender dock has an interesting story of its own and will be discussed in a later post.

As well as having an obvious fascination for visitors in their own right, the timber ponds attracted an enormous amount of wildlife, particular sea birds, and this war remarked upon by a number of writers.  Remembering the docks in earlier times, the authors of Thames Side Yesterdays describe Acorn and Lavender Ponds as "secluded stretches of water that seemed to mirror the beauty of some slender and lofty ship, some lost lady of old time."  They mourned the passing of this peaceful time in the 1940s, when they Surrey Commercial Docks were seething with activity.

By 1929 A.G. Linney could see the writing on the wall for the peaceful outlier ponds:  "Globe Pond has disappeared, filled in. Acorn Pond remains, as yet not much diminished, though the coming changes have removed a portion of that, too.  The glory of this great trinity of water spaces, where the rafts of pitch, waney and Oregon pine float and sway, is dying before the remorseless hand of necessity.  I sadly realize that within some few months the grass-banked rim of Lavender Pond and Acorn Pond will vanish."  He also describes numerous breeds of gull, ducks, herons, coots, snipes, kingfishers and swans as well as carp. 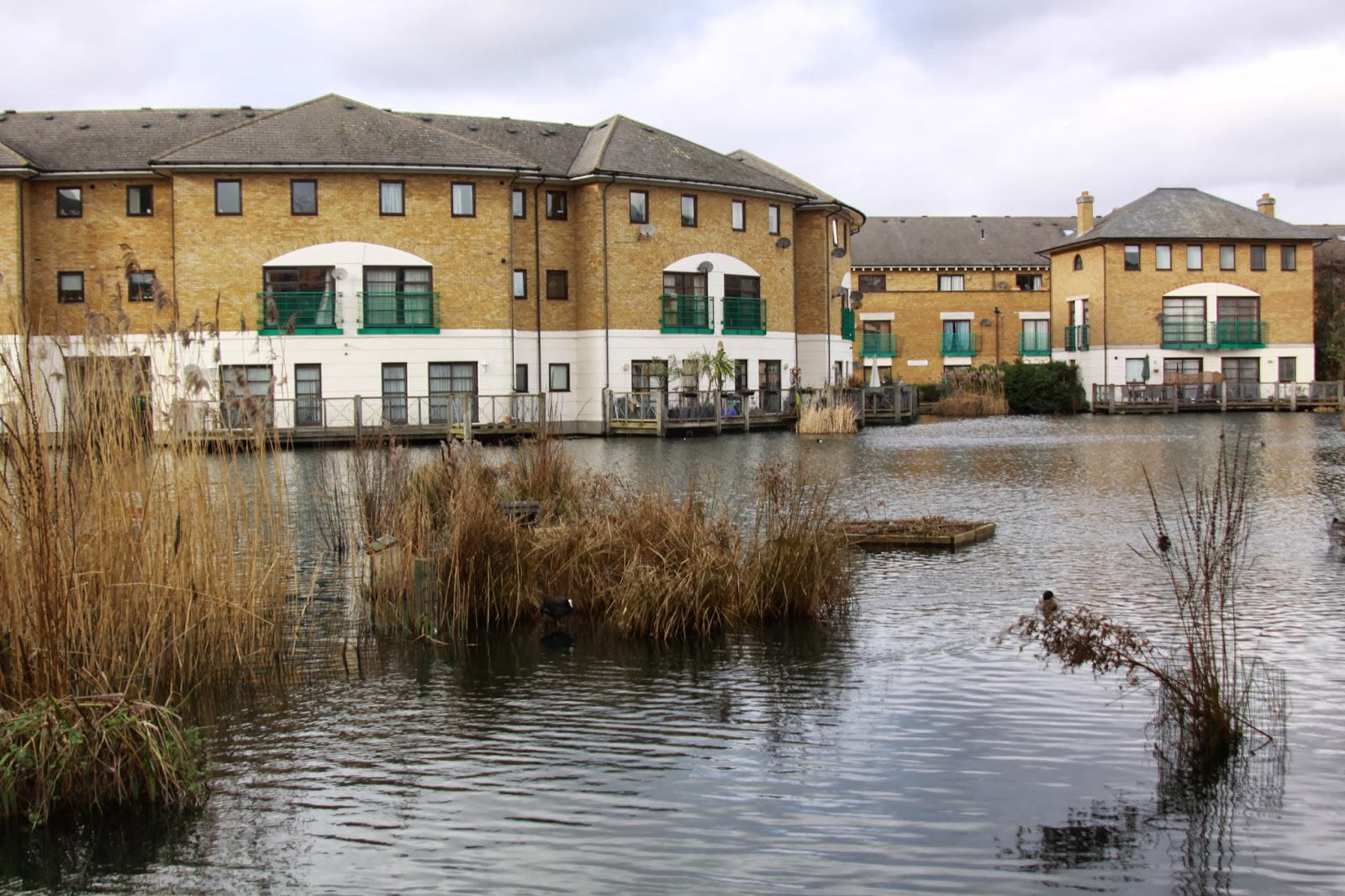 Today Norway Dock is occupied by the development known as The Lakes.  The residential buildings themselves, erected between 1988 and 1996 by Shepheard Epstein and Hunter,  are nothing special in architectural terms but the terraced and particularly the semi-detatched houses are novel in being built out into the large shallow body of water that was formerly Norway Dock.  The dock was filled in after the closure of the Surrey Commercial Docks in 1969, but was re-excavated when The Lakes were conceived, to create a scenic and shallow water feature for the residents for whom it was designed.  Norway Dock is also overlooked by Finland Quay, an apartment complex that was built in 1987-9 by Richard Reid.

When I first moved into the area the water of The Lakes was full of millions of goldfish, and they were quite lovely, a never-ending kaleidoscope of colour. Until recently I thought that it had been fished out by herons years ago, but if you look carefully there are enormous carp still cruising like lazy submarines beneath the surface.  There are reeds, nesting pontoons and the bird life takes full advantage of the opportunities provided for it by the management company. There are always swans cruising around in a leisurely fashion.  It is nice to see this area of water being managed so well, whilst the neighbouring Greenland Dock and South Dock pontoons, once home to swans, ducks, coots and moorhens, were allowed by Southwark Council to sink and are now derelict.

Part of the original connection to the Greenland Dock is retained.  On the Norway Dock side is blocked off by Finland Street, and serves as a small rectangular duck pond, with nesting pontoons and duck houses.  On the other side of the road it retains its connection to Greenland Dock and is crossed by James Walker's 1855 former swing bridge, which was moved there from the South Dock lock entrance by the London Docklands Development Corporation in 1987.

Lady Dock was infilled after the closure of the docks, and is now covered with housing. A tiny slither of Acorn Pond is occupied by the Russia Dock Woodland park the rest covered with more housing and the Surrey Docks Health Centre. Part of Lavender dock has been preserved, with its pump house, lock entrance and a small area of its water now forming a nature reserve. A small part of Globe Pond was restored as a water feature in Russia Dock Woodland by the LDDC, where it attracts water birds all year round. 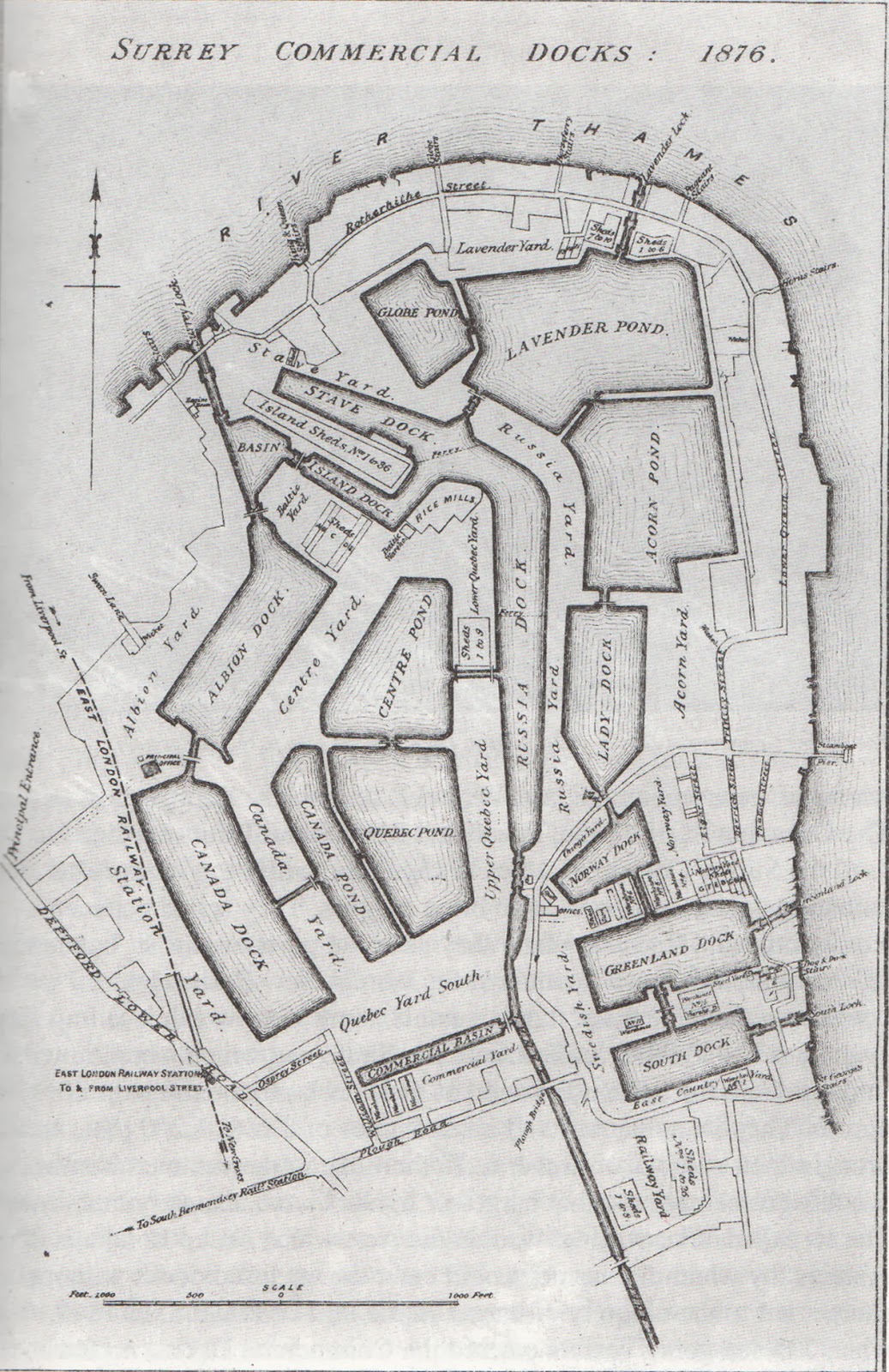