As floods swamp most of lowland Britain and batter our shorelines, it seemed like a good time to review what sort of problems Rotherhithe experienced in the past with rising floodwaters.   And indeed, there are records of floods from the Medieval period onwards.

Before the establishment of the Grand Surrey Canal and the inland docks from the early 1800s onwards, Rotherhithe consisted mostly of lowland marshes and streams, and was very vulnerable to rising waters.

In 1082 St Saviour's Abbey was established, now better known as Bermondsey Abbey.  Cluniac monks from the Abbey played a major role in building, and maintaining the riverbank protection in Rotherhithe against the ever-present danger of flooding.   There was no centralized approach to flood management, so most of the work fell on local parishes and riverside businesses.

Although Rotherhithe village was built on one of the few pieces of higher land in the area, it did not escape flood damage.  Not for the first time, St Mary Rotherhithe was damaged by a bad flood in 1705. It was rebuilt in 1714 partly because of the flood damage inflicted upon it, and this time was raised above the ground level, with an elevated entrance, which was reached by a flight of steps.  Although floods continued to breach the river walls, the church was now relatively safe from ingress.

In the 1860s the Thames Embankment was built to protect low lying areas to the south of the river,  public rights of access were raised, and Rotherhithe landowners along the shores of the Thames were required to raise their own stretches of river wall by an additional 18 inches.  However, there was another major flood on January 26th 1881, described by Reverend Beck as follows: "On the evening of January 26, 1881, in the midst of a blinding snow-storm the high tide, impelled by a furious gale, overflowed the banks, and burst through the retaining wall of one of the dry docks in Rotherhithe Street, flooding the dwellings of the inhabitants and inflicting great damage and misery on the poorer inhabitants, so that a public subscription had to be raised to recompense them for loss to their furniture and property." Another flood in 1904 saw a December tide overflow the banks at Rotherhithe.

Two floods in the 20th Century were of particular note:  the 1928 and 1953 events, both of which caused damage and loss of life along coastal and riverine areas.  London was hit hard by the Thames floods of 1928.  Heavy rain and snow. High Spring tides, storm surges in the North Sea and high flow in the Thames.  14 people were drowned and 1000s of people were forced out of their homes.  Much of Rotherhithe was submerged and a number of fascinating photographs survive that show people being evacuated from their homes onto crudely formed rafts.   Rotherhithe Tunnel was flooded, after which, according to the Rotherhithe and Bermondsey Local History  website a floodgate was built to constructed in 1939, together with a floodwall in order to protect both the Rotherhithe tunnel and the nearby East London Railway, which uses Brunel's Thames Tunnel.

The flood of January 31st 1953 was a national disaster, caused by a North Sea storm tide. The worse damage hit coastal areas on both sides of the Channel, with 307 casualties in Britain.  In London it swept through the streets flowing into the ground floors and cellars of Thames-side warehouses, business and homes.  In Rotherhithe, it reached well up the walls of local buildings, forming a river down Rotherhithe Street, and when it retreated it left a thick residue of black mud on the streets.

Today the area is protected both by the river wall, which is checked annually by the Environment Agency, and by the Thames Barrier, which became fully functional in 1984. 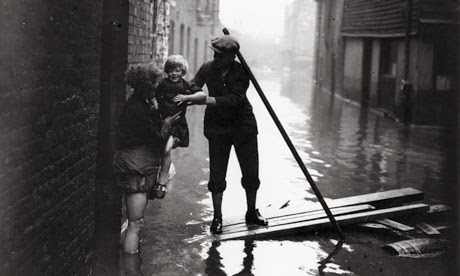 See more about the people who were photographed in the 1928 flood at
http://russiadock.blogspot.co.uk/2014/02/the-people-in-classic-photograph-of.html

Sorry, previous comment was me - clicked in the wrong place.