Snow in the Russia Dock Woodland

I took one look at the solid ice outside my front door and exchanged trainers for hiking boots. A good decision. There was no-one to see when I arrived at the park but by the time I left there were several mothers with children and a number of dog walkers, all sliding on the patches of ice. If you are thinking of going over to the park do be careful, whatever your footwear, the flight of "stairs" which take you from behind Globe Pond up to the windmill - they were treacherous.

There was a lot to see in the RDW and Stave Hill eco park. There were few colours around, but a few shrubs were in bud or even in full flower (including the mohonia below), and the light on the snow and the whites and shadows against the blue sky were spectacular.

There was a lot of bird life around, and several squirrels.

All the ponds were frozen, with a few disconsolate birds standing on the ice. On Globe Pond there were also pigeons standing on the ice, next to the seagulls, which was slightly peculiar to see. The overflow from Downtown Pond into the channel along Waterman's Wall had become a very attractive row of icicles, but there was a trickle of water making its way out beneath them. The channels themselves were all frozen solid.

Although some of the bigger paths in the RDW were quite well trodden, presumably by people getting to and from work and taking children to school, others were virtually untouched, with only a few shoe marks, pushchair tracks and dog prints to be seen. 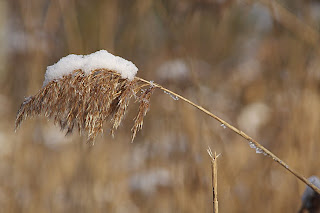 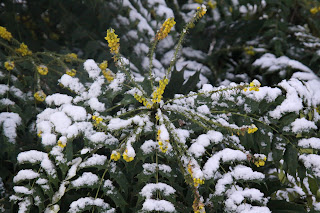 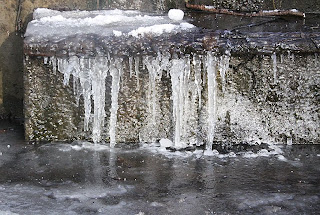 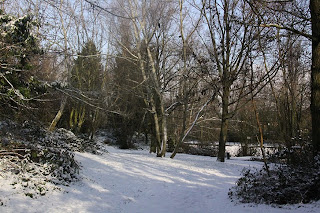 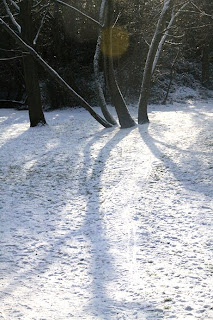