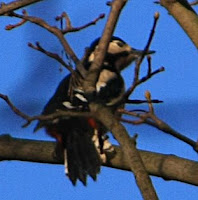 Yesterday was a beautiful day, all bright blue skies and golden sunshine, although very cold. The bright light picked out all the remaining colours in the woodland, highlighting the oranges and reds of bark, branches and new buds. The birds were in full song, mainly great-tits, long-tailed tits, blue tits and blackbirds, a pink-breasted chaffinch and a spotted woodpecker which was so loud that I was able to track him down. The pigeons were in their usual place, perching in the trees by one of the bridges, a handful of them down on the ground, which were accompanied by a white pigeon with grey markings.
All the ponds were frozen with the inevitable life belts firmly iced into place. On Globe Pond the coots skated across the surface. There was no sign of the kingfishers at Downtown Pond, which could be a result of the ice or the growling noise of the bulldozers on the other side of the trees on the Downtow

n site. Barratt Homes, presumably, although quite what they are up to is anyone's guess. I didn't realize that they had been given permission to begin work there.

Apart from the lovely birds and new buds on shrubs and trees, brave given the amount of frost and ice around at the moment, there were no signs of other life. I didn't even see any squirrels today, which is an absolute first.

The views from Stave Hill were particularly good, with all the yellows and oranges forming a colourful border for the buildings at Canary Wharf, which were steaming against the bright blue sky. 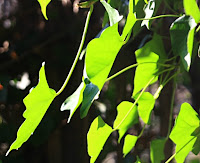 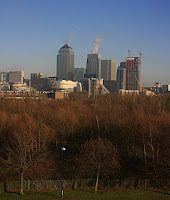