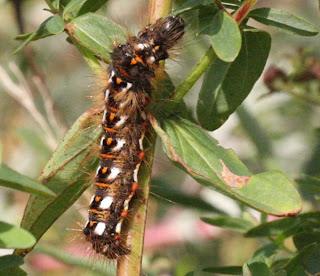 Saturday was a wonderful bright sunny day. I was spring cleaning a bedroom, looking out of the window into the day beyond and suddenly realized I really had something better to do than waste my time on a room which would happily wait for a rainy day.

Again, the results with the new macro lens are a bit mixed. I seriously need to get in some more practise.
Trying to relocate yesterday's caterpillar I disturbed a fox who was sunbathing. I sat still for a while hoping that it might come back, but that plan was foiled by my mobile phone which I couldn't find and whose ring tone grew incrementally and offensively louder, and by a kid on one of those wretched motorbikes. circling Stave Hill. So I diverted my attention back to the hypericum and its furry occupant, which was still there. There were also a number of rather lovely green shield bug insects (hemiptera - Palomena prasina), which I photographed. They are bright pink on their undersides. 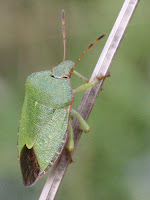 As I roved through the grass looking for further likely subjects I saw a small dog who I recogized instantly, with some surprise- Bijou! Following the lead I found Jeremy Pender on the other end. It was super to catch up, as Jeremy now lives in Yorkshire. Shortly afterwards we were joined by Lorraine, with whom I have had many email conversations but never managed to meet. Lorraine had five dogs in tow, and between all of the dogs and the three of us we managed to cause some quite substantial chaos on the pathway. As we talked I saw a man with a camera in his hand approaching us, and guessed that this must be Les Butler to whom I was at last able to say hello in person.

After Jeremy and Lorraine departed with their happily noisy small rabble, I took Les to inspect the caterpillar and talk photographs and macro lenses. We watched a rather amazing little winged insect land on the hypericum and crawl into the grasses - long, thin and black with a bright yellow section on its back. Neither of 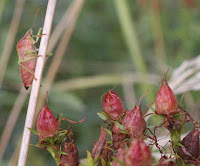 us was able to take a photograph of it because it vanished into the undergrowth so quickly. Looking through my insect book I am fairly confident that it was an Amlyteles armatorius. I have never seen one before but apparently they are common in the summer, particularly on umbels.

I had to leave, so I left Les to head out towards the Stave Hill pond. As I reached the green, where people were playing football and packing up picnics, I heard the sound of small dogs barking. I turned to see Jeremy and Lorraine with Bijou in the middle of a group of other dogs, livening life up for everyone. I smiled and waved before going home. 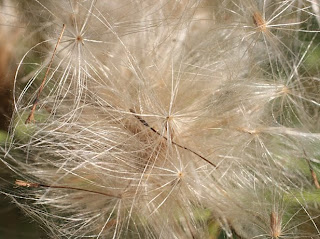 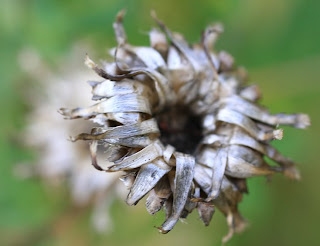