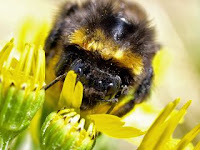 I've run out of my own weekend photographs and haven't had the chance to take any more so far this week, but if you're looking for a photo fest then have a look at the latest from Les Butler's Walks With My Camera blog.

Les is still taking some magnificent close-up shots, which are crystal clear and highly coloured. The photograph to the left, which I particularly liked, is a very good example.

Like me, Les saw that amazing blue dragonfly at the Stave Hill pond, but he had more luck than I did with the process of capturing it on camera. It turns out to be an emperor dragonfly, which you can see on his blog here (fourth photo on the page - but don't miss the others). As he says, it is aptly named.