A high tide in Rotherhithe today

I walked up Greenland Dock today towards the Thames in the only dry patch in an otherwise incredibly soggy day, and saw the Thames Clipper going past as though it was at land-level. It looked more like a hovercraft than a boat!  So I wandered up to have a look at the tide, and it really was very high.  It was only a couple of feet below the level of the quayside, had flooded the hydraulic equipment for the Greenland Dock lock gates (which I've never seen before) and was only just beneath the wooden walkway that passes in front of Odessa Wharf.  And it is always telling when the pier down to the Thames Clipper pontoon is sitting level!

I assume that the Angel and the Mayflower were watching the levels carefully, with their jetty and terrace respectively possibly flooded, and that the Thames Path at the Old Salt Quay was receiving a good coating of water. 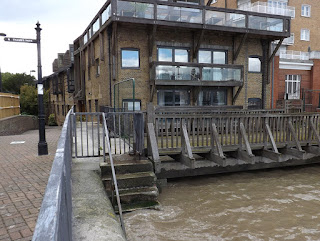 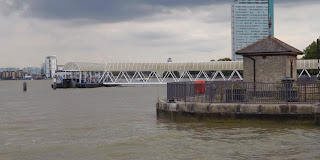 The squatters in the former Downtown Nightclub had an interesting display of tents hanging off the side of the premises.  Difficult to know why, as it was raining for most of the day.  I have been away for most of the summer so I'm out of touch with the status of the premises that are currently occupied by squatters, but it seems to have become a real problem in the area, with former pub premises being targeted and the Lavender Pump House having been given a graffiti-themed interior a few months ago. 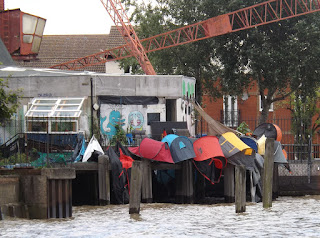 I walked back through Norway Dock (The Lakes) and it was good to see three juvenile brown-feathered swans, still preferring to stay together, as well as a family of small brown ducks (in spite of trying the RSPB's bird identifier I still have no idea what they are, but they were so beautifully neat and tidy!). 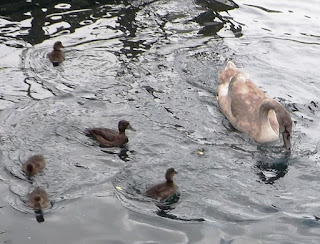 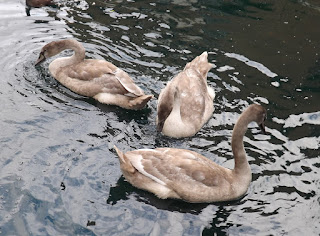 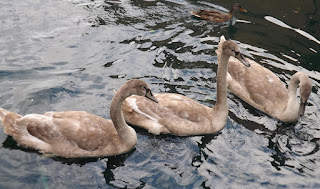 And this is the flood warning from the metoffice:

Tidal Thames riverside from the Thames Barrier to Putney Bridge

Issued by: Environment Agency
The river flow at Teddington Weir is normal for this time of year at 21 cubic metres per second and is steady. We anticipate the flows to remain steady for the next couple of days. The forecast high tide level at Tower Pier will be 4.50mAOD at 05:00 BST on Wednesday 2nd September 2015 with a high confidence. This message will be updated by 9am on Wednesday with a forecast for the afternoon high tide.