One of the earliest steam warships: The Rising Star 1821


The paddle-steamer The Rising Star, built by the Brents at their Greenland Dock (Rotherhithe) base, was one of the first steam warships to be built and is therefore something of a legend.  Open any book on the history of steamships and she will almost certainly have a mention.  She was one of a brand new wave of ships built to counter the fall-off in new wooden naval ship commissions following the end of the Napoleonic wars.  Whilst many ship builders were downsizing or turning to ship breaking instead, some ship builders had the resources to invest in the future of shipbuilding: steam.

The Rising Star was commissioned in 1818 by (later Admiral) Thomas Cochrane (1775-1860) as a warship for the Chilean Revolutionary Navy in 1821.  She was converted from an earlier ship called the North Pole and constructed for Arctic exploration.  She was renamed Rotherhyde at some point, and in 1818 was laid up at the Brent shipyards.

Although Cochrane had had an important and successful role in the Royal Navy during the Napoleonic Wars, he was dismissed in disgrace in 1814, having been accused of committing fraud on the Stock Exchange.  He then worked as a mercenary, serving in rebel navies during wars of independence in Chile, Brazil and Greece.  He was a colourful character, the model for C.S Forester's Hornblower series.  He was hired by Chilean President Bernardo Higgins in 1818 as Vice-Admiral of Chile and Commander in Chief of the Naval Forces.  The Chilean Navy was fighting a war of independence against Spain when Cochrane placed an order for The Rising Star. Cochrane was so convinced about the value of the project and the power of steam that he contributed 15000 pesos (around £3000) of his own money to the ship's construction.

The order was placed with Rotherhithe ship-builder Daniel Brent.  The Brents had been involved in maritime activities for generations.  Daniel and Samuel Brent had inherited the ship building business from their father John Brent, who had been in partnership with John Randall.  Randall had been building ships for the Royal Navy in Rotherhithe at both Nelson Dock (also known as Cuckold's Point) and Greenland Dock since at least 1755.  John Brent went into partnership with him, possibly due to his East India Company connections which may have enabled him to secure commercial contracts for merchant ships.  Randall and Brent was a very successful shipbuilding company, with some remarkable ships to its name. The company eventually passed into the hands of John Brent's sons Daniel and Samuel, who operated under the name S and D Brent between 1803 and 1811 and then Brent and Co until 1819.  Instead of falling into the same decline that many other shipbuilders did at this time, the brothers innovated and moved into the brave new world of steam technology.  Following on from the successes of three packet paddle steamers, they were commissioned to build The Rising Star.  It is unclear whether she was built at either Greenland Dock's North or South Yard, both of which were operated by the Brents. 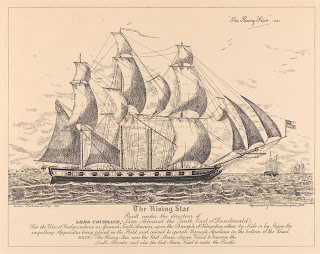 The Rising Star was 428 ton a corvette-sized ship, built for speed. She is thought to have had four boilers, which were positioned either side of the slender two funnels that were situated behind the foremast. The two 35 horse-power engines produced 70 horsepower between them and were supplied by Maudsley, Son and Field of Lambeth. She had a retractable paddle-wheel but this were not placed on the exterior of the ship, where the paddles would have been vulnerable to attack, but was contained within casings inboard.  The positioning of the paddle inboard was a design that the Brents had used in their 1818 paddle steamer The London Engineer. This design was based on a patent by Richard Trevithick and Robert Dickinson.  The steam equipment was not sufficient to propel her without the assistance of her sails, and was something of a supplementary aid. She had three masts and was square rigged on all of them.  She was equipped with 20 guns, 10 on each side.

Thomas Cochrane left his brother William in charge of fitting her and sailing her to South America.  The Rising Star was ready for trials on the Thames in February 1821, but did not leave until the October, perhaps indicating engine difficulties.  Although this was too late for the purpose for which she was built (the Chileans had won their war of independence), she sailed to Valparaiso from Gravesend on 22nd October 1821. The trip was not without mishap.  En route she experienced problems and had to put in for repairs (either at Cork or Portugal, depending on which version you read, although Portugal seems more plausible), eventually arriving in Chile's major port Valparaiso in the April of 1822.  The problems appear not to have been specified in detail, but in a court case on a very different topic, one of the passengers on The Rising Star's trip, Mary Ann Bird, the wife of one of the ship's engineers (by then deceased), was recorded saying that the engine had not answered properly.

She was only the second steam warship to be built (the first being the American ship Demologos).  As the illustration above shows, the early marine steamships were strange looking hybrids, with steam technology grafted onto the earlier designs of wooden sailing ships (including full complements of masts and sails and bowsprits) but with the addition of steam engines, paddles and funnels.  The Rising Star was one of these early hybrids.  Later steamship design was considerably altered because shipbuilders realized that steam-propulsion worked very differently from sail power at sea, but from the outside, with her paddles invisible, The Rising Star  looked very much like a traditional sailing ship, albeit with funnels.

To reach her destination at Valparaiso she became the first steamship to cross the Atlantic under steam power from east to west in 1821-22 (the steamship Savannah had done so, but only under the power of sail, without the use of her steam engine).  It is, however, contested that she made the entire crossing under steam alone, and it has been suggested that she was only powered by steam for 19 hours of the crossing. She apparently made the crossing in the same time range as a standard sailing ship. The Rising Star was the first steamship in the Pacific.

Arriving too late to perform her role as a warship for Chilean Independence, The Rising Star (Estrella Naciente) was sold to Winter y Brittain, Buenos Aires (Argentina) and she sank in Irish waters in 1830.


Thanks, as usual, to Stuart Rankin's booklets for many of the details in this post.